When my boyfriend called me into the living room, I walked in to see a jungle of camping equipment and my boyfriend’s proud smile.

“Here’s all the stuff.” He gestured. I didn't even know what half of it was.

My boyfriend loved camping, and wanted me to share the passion. It’s so fun, he would say. It’s so romantic, he’d insist. I had never been camping, nor did I ever want to. I just didn’t get it. Why give up my soft bed for hard ground? I had been watching a lot of Dr. Phil lately though and on his relationship episode he said compromise was the key ingredient to a successful union. “Okay,” I said, looking at the equipment strewn across living room floor. “Let’s go camping!”

“I booked us for next weekend!” Nick practically hollered. “We leave Saturday afternoon. Just you, me and the great outdoors!”

It was Saturday afternoon. I had put off getting ready for as long as I could but Nick was out getting groceries and wanted to leave as soon as he got back. So, with a sigh I retrieved the largest overnight bag I had and opened my closet door. Was there fashion etiquette in the camping world? Was ripped clothing bad or expected? Would my Lulu lemon hoodie be too pretentious? Would my gold flip flops be too ‘city’? Maybe people just went barefoot like cavemen.

In the end I grabbed an old pair of cutoff jean shorts, a couple of t-shirts and a sweatshirt. I then filled the entire rest of my bag with band-aids, gauze, Polysporin, room deodorizer, hand sanitizer, bug spray, calamine lotion, a bear whistle and a twenty-sixer of vodka. No. “Yes,” my mouth yelled. I took a last look at my plush, queen-sized bed and walked the plank to the front door.

“Hi camping buddy!” my boyfriend enthused, taking my bag and heading back outside.

Nick turned and gave me a look. I let it drop.

“We’re not going to Africa. We’re going to Northern Ontario.”

“Okay, okay.” I started to close and lock the door. “Wait!” I stopped. “Should I have brought toilet paper?”

The drive was endless. Three hours of long highway and nothingness. I was sick of the radio, sick of the CD’s we brought. I didn’t complain though. Dr. Phil’s influence? Nah, I was afraid Nick would suggest car games and I would have to jump and roll out of the moving vehicle.

We arrived at the camp. “Cool Breeze Campground” it was called. Nick parked the car in front of a small, rundown shack. “The head office,” he smiled sweetly. We had to stop here, I was told, to receive the site number where we could set up camp.

"You mean it matters?” I asked quite seriously.

Nick ignored this, got out of the car. He was back out in minutes. We continued farther into the grounds, driving down a narrow strip of dirt road surrounded by woods. The car made dust puff up in clouds. I coughed hard, hoping campground was not now embedded in my lungs and rolled up the window.

Then we came upon it…the community. Rows and rows of pitched tents. Big ones, small ones, close together yet a polite distance apart. People were all around. Laughing, chatting, reading, lounging. It was Boonie Land suburbia!

Nick stopped at a vacant slice of trampled forest and turned off the car. “Here’s our site!” he cried and bounded from the car. He ran to the small bit of space and walked its perimeter over and over in circles. Was he marking his territory? Oh god, was he going to pee on it?

I got out of the car.

“First we put up the tent.” Nick opened the trunk and started unloading all of all our stuff.

“Okay,” I said. “So a guy comes and does that?” I looked around for someone in some kind of authoritative orange vest.

Nick proceeded to pull out a whole bunch of poles and sticks. Some of them looked rusty. When was my last tetanus shot? I wondered. Had I ever had a tetanus shot? Oh god, I should have called my mother and asked before we left.

After a whole lot of pounding, hammering, fitting and stretching, our sleeping quarters were erected.

“Done,” Nick said and I went over to look.

I touched the side of the tent. “This is all that keeps me from being eaten by something?” “What something?” he asked.

“I don’t know, whatever gets hungry out here.” I was given another look. “Okay,” I said determined to be a sport. “Now what do campers do?”

“We get wood and build a fire.”

This turned out to be pretty easy as the last campers had a fire pit and some wood leftover beside it.

He got out the cooler, put some chicken in a pan and added some foil wrapped potatoes. He put it over the fire and hummed while it crackled and spat. After a while he plopped a piece of chicken, and still hard potato on a paper plate and handed me some plastic cutlery. “Camping food,” he smiled.

I poked around at some charred parts, trying to miss the raw parts. “That was great,” I said, putting my near full plate in the garbage. “Now what? Songs around the fire?” I asked jokingly.

“Well, no. We can stay by the fire though. Perhaps invite over our neighbours, be social. That’s what people do up here. Get to know other campers, talk about camping stuff, tell camping stories.

“I’m going to bed.” I got up and walked toward the tent.

I zipped open the tent and got inside my sleeping bag fully dressed.

Nick stuck his head in. “You just want this to be over with, don’t you?”

“Uh huh. Well, I’m staying up. Enjoying the fire. The stars are gorgeous out here at night.”

“Oh, okay well maybe I’ll get back up when the stars begin.”

“When they begin?” Nick sighed with disgust and I could hear him settle back by the fire.

“Hey!” I heard a voice exclaim loudly. “Is that a Sabre?”

Who was that? What they were talking about. Was it an animal? Did they spot something wild?

The tent, they were talking about the tent. The voices were coming closer. Were they going to come in? Would Nick give a tour of the tent? Did campers do that?

“Two man.” Nick answered. “What’s yours?” The voices grew fainter as the men walked away.

I breathed a sigh of relief and closed my eyes. Okay, so I guess I didn’t exactly compromise on this. Still need to do some work on achieving that perfect relationship.

Note to self though, I thought as I pulled the sleeping bag over my eyes trying to block out the sun, tomorrow write in to Dr. Phil and make a show suggestion - that he and his wife go camping. 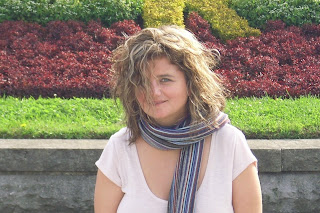 Jamie Turner lives in Burlington, Ontario, where she enjoys books of all kinds. Her passion for writing has been awakened by the fun and supportive environment of Brian Henry's creative writing class. When she doesn't have a novel in front of her Jamie can be found in the kitchen with a cookbook instead, whipping up healthy delights – sweet and savoury alike. You can read another piece by Jamie here.