“Wherever I Go” by Sharon Chalmers

Well, I was finally here, sitting at a cafe in the glorious sunshine of one of the most spectacular areas of Italy, the Amalfi Coast. I was sipping a chilled glass of Prosecco and overlooking the impossibly blue Tyrrhenian Sea. Ah, pure bliss! La dolce vita!  And that’s when I heard the strains of the Beatles’ “We all live in a yellow submarine” shredding the air.

This was my first clue that perhaps my expectations for this holiday might have been a tad overblown.

What was I expecting? An adventure to jump-start my stalling life. Maybe I’d even discover the purpose of my life, something which has eluded me all these years or at the very least, experience an epiphany or two. And surely, in the midst of all the natural beauty and culture, my spirit would be restored and I would recover my lost optimism, returning home refreshed and inspired. Was this too much to ask?

I happened to be here because my best friends, four intelligent, fun-loving women, convinced me this trip was precisely what I needed after a few years of personal turmoil, including the end of a thirty-year marriage, a traumatic move and a laundry list of health issues.

A cultural tour would be ideal, they said. A small group of like-minded people would be much better than travelling alone, they said. Especially for an artist like you, they said. (My friends, though well-meaning, tend to have an unrealistically high opinion of my art.)

I agreed that the idea had some merit, although I was skeptical of being herded about by a sign-carrying tour guide. On the positive side, I’d be staying at one hotel the entire time and, most importantly for me, the itinerary called for a fair amount of free time to satisfy my need for solitude.

You see, I’m a bit of a loner and covet solitude above most other things. Don’t misunderstand… I have friends, as I’ve mentioned, and I generally like most people but I just can’t be around them for great chunks of time. However, once the decision was made, I was moderately excited and as enthusiastic as my personality allowed.

I was at that stage of my life where parent-child roles sometimes become reversed and during the last few years, I’d become responsible for my mother’s well-being. I was looking forward to exploring my own interests without ties or constraints of any kind.

And OMG (I recently discovered the language of the internet), how I admire all things Italian. Italian cuisine, both cooking and eating, has been a life-long passion. And the music… Italy is the birthplace of opera and Andrea Bocelli after all. I had even taken an introductory course in the language: Ciao bella! Vino bianco per favour. Gracie. The words just rolled off my tongue.

Furthermore, I’d graduated from an admittedly poorly-conducted Sommelier course  years ago, writing my final essay on the “Wines of Italy,” for which I received a basically worthless diploma and a tastevin to hang around my neck, as if I would.  Still, I was eager to put my dubious expertise to the test.

And of course, the art, architecture and history of this extraordinary country, all of which I am genuinely and keenly interested in and pretend are my primary reasons for choosing Italia.

Just in case you were wondering if men featured on my list at all, that would be a definitive no, as in I have no desire to jump off that bridge again any time soon.

So as I said, here I was, blissfully alone, except for the group. At our first gathering, though, it became painfully apparent that an older senior (as opposed to a junior senior like myself), a lovely white-haired lady the spitting image of my mother, was the only other person on this tour travelling solo. I admired her independence, but then Edna attached herself to my side and we became “a couple” for the duration of the trip.

On one occasion, the group was shopping along the cobblestone paths of the town and I was enjoying the sights and sounds, absorbing the colours and storing images in my memory for future artistic projects. I could feel my blood pressure rising when Edna called me over to admire some embroidered linens and souvenirs. Deja vu… and I was back home following my mother through Wal-Mart on the hunt for deals on bunion plasters. 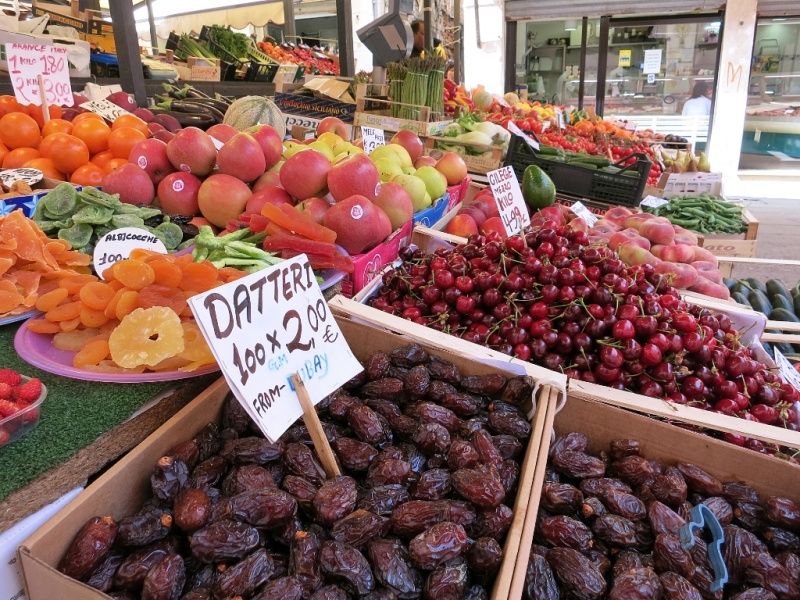 And so I began to seek creative ways to extricate myself from the group, though it wasn’t easy and it certainly didn’t go unnoticed.

To be fair, as a group, we had some remarkable times. We tasted limoncello while wandering through a lemon grove on Capri. And we rowed through the caverns of a grotto, an otherworldly experience of caves, rocks and water that changed colour from turquoise to emerald green.

We endured a terror-inducing bus trip along the ragged coastline to stimulating, chaotic, polluted Naples where we toured the famous National Archaeological Museum and later enjoyed the equally famous Napoli Pizza Margherita. Tough-looking kids, often girls, seemed to enjoy passing their time hanging out of windows or hanging out on sidewalks, cursing at tourists and giving us the finger. Motorbikes everywhere. Bleating horns.

On another day, an unforgettable excursion to Pompeii, its tragic history buried in ash for centuries. Fragmented images of paintings on crumbling blue walls, angels and erotica. Magical abstract designs created by decay. Pure inspiration for the artist in me.

But the best times I recall were those stolen stretches on my own when I sought out slices of local life to sketch. Vendors at work in their fruit and vegetable stalls; weather-beaten fishing boats at the marina; lemon trees and bougainvillea. Perfect moments sitting on rocks by the shore, mesmerized by the tranquil cerulean waters of the Mediterranean. Or in churches, quiet and cool.

And one happy day, I became lost as I was exploring, walking on and on but unconcerned, through ancient stone portals and a maze of narrow alleyways. I finally came upon a familiar sign of modern civilization: a rainbow of assorted garments, underwear and such, floating overhead on wires between buildings. And there was a special evening, the air soft and warm, when I dined alone at a ristorante on the Piazza Tesso, savouring every delicious bite of my dinner and every sip of my wine, thoroughly enjoying my own company.

Perfetto.
After I’d been back home for a while and was looking over my photographs, I realized my prominent memories were of the incredible things I’d seen and the people I’d met … the petty annoyances pretty much forgotten, as were the grandiose expectations which never materialized. This holiday had provided a beautiful, life-enhancing but temporary distraction, and for that I was grateful.

Yes, I had travelled with all my personal baggage firmly packed and its burden, though subtle and simmering just beneath the surface, had remained with me throughout the trip. Of course it would, wouldn’t it? The truth is that wherever I go, there I am. 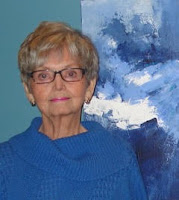 Sharon Chalmers took a rather lengthy detour in life (20 plus years primarily in the airline industry) before setting about to rediscover her creative routes, first as therapy, then for the pure joy of it. The journey led Sharon from calligraphy to collage to mixed media painting. And finally, to abstract expressionism. More recently, she’s been exploring creative writing and has rekindled a life-long enthusiasm for the written word… this time, her own words!”