“World War I from the Berry Patch” by Marion Squair Hunter

This is a true story written by my mother.  She was one of the girls in the summer of 1917 who worked as a Farmerette in the Niagara District. ~Catherine Munro

The farmers of the Niagara district must have been really up against it by the year 1917 to accept the help of city girls in the harvesting of the crops.  Not ordinary city girls, but University students: dreamy, impractical intellectuals, whose familiarity with Latin roots was of little help in weeding the root vegetables.
Any misgivings the farm women had about the effect those glamorous city girls might have on the men of the family, were dispelled at our arrival.  Covered from neck to knees in heavy grey denim, and from knees to toe in black ribbed cotton stockings and stout boots, we were not an alluring sight.  True, we wore bloomers: the badge of ‘The New Woman’, but heavily pleated, and most entirely covered by the smock.  One could see we had legs (still referred to in polite society as limbs) but so heavily encased it was difficult to guess their shape.  Only the lower part of the arm was ever exposed to the sun.  Our faces were carefully shaded by large straw hats or milk maid bonnets. The latter were the gift of a local dairy, presented more as a humorous gesture than as erotic advertising gimmick.  By no stretch of the imagination could we be called ‘sex symbols.’  No one harboured any designs to use us as post war decoys to “keep ‘em down on the farm, after they’d seen Paree.” 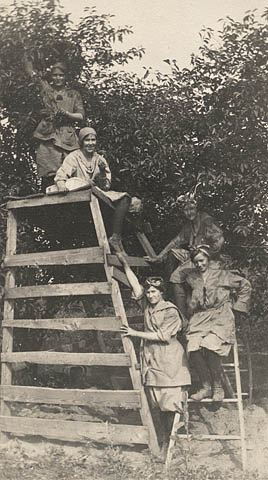 We absorbed our week’s supply of Vitamin D on Sunday mornings when we donned our serviceable bathing suits, whose relationship to a Bikini was about as near as that of the jelly fish to man.  Clad in these form concealing outfits, we stood knee-deep in frigid Lake Ontario, removing the traces of honest toil from our clothes with cold water soap.
On Sunday afternoon the camp took on the appearance of a Neapolitan slum.  From every available tree were strung clothes lines, on which our uniforms, pyjamas and underwear swayed in the wind.  Bedding was given an airing outside those leaky army rejects which we proudly called our ‘Bell tents.’
The Farmerettes relaxed without any help from drinks (soft or hard) or even cigarettes.  Satisfied with our contribution to the War Effort, we gazed drowsily and smugly at our drying uniforms with the letters N.S. displayed on one sleeve.  These two letters embroidered in bright blue silk boldly proclaimed that we were performing a National Service.  That compensated for the meagre pay of fifteen cents an hour, and put us on a par financially with private soldiers.
The charge of money grubbing couldn’t be levied against us, as it was sometimes against munition workers.  Our idealism was genuine.  Imbued with patriotism we rushed into the berry patch and orchard to save the world for democracy by winning the war which was to end all wars.
If the war news was bad our backs felt permanently bowed by cutting asparagus and picking strawberries.  If it was good we hardly noticed the burning sand of the raspberry patch, or cared if a day in the cherry orchard left us looking like coal miners rather than Checkov’s heroine.
The weather gave us almost as much cause for gloom as the Germans.  Unlike Mark Twain we decided to do something about it, or rather about its adverse effect on our finances.  At first we welcomed a day’s rain.  It gave us a chance to rub each other’s backs with Horse Liniment and to feel at one with the boys sloshing through the mud of Flanders. But, as our back muscles grew stronger we began to count the losses.  A three day rain was able to wipe out any surplus over our board money of $4.00 per week and leave us destitute without a five cent piece for an ice cream cone.  When the enforced holiday was spent in a leaky tent wearing wet boots and uniforms and encircled by an explosion of the mosquito population feelings of revolt began to germinate.  We did not plan to use force.  Our camp was a model of democratic government.
Instead we elected committees, drew up an agenda of grievances.  We demanded conferences with the government representative responsible for our plight.  The result was a new agreement with the farmer for us.  We would accept half pay for idleness.  But, and we were very firm on this point, housework we categorically rejected.  We were quite willing to spend ten hours a day on our knees weeding carrots but not even one hour scrubbing a kitchen floor.  A scrubbing brush was a symbol of the subjection of women, while a weeder was a mark of her emancipation.  There remained work in the barn or the factory.
In a fruit district barns are often lacking in the one ingredient which provides work: animals.  So, we were reduced to the job of ‘knocking together’ the berry crates to fill the sodden hours.  As the rain poured down the custom made crates piled.  Factory crates would no doubt have been cheaper, but that would have resulted in paying us seven and a half cents an hour for just sitting, or perhaps playing cards.  No farmer was willing to risk the responsibility of weakening our moral fibre for the sake of a few dollars.
In the areas blessed with jam factories this problem did not exist.  There the Farmerettes blissfully peeled peaches, pears and tomatoes fondly believing them to be destined for the trenches.
Since ‘rain’ was only loosely defined in our agreement some farmers felt the girls could work outdoors during a light drizzle without endangering their health.  Picking was out of the question since soft fruits grow mouldy if picked wet.  After much racking of brains the farmers came up with the idea of digging.  The result was a series of large potholes designed to serve as basements for future Berry houses in which to accommodate the mounting pile of berry crates.  Roadwork turned out to be a suitable and surprisingly pleasant rainy day project.  Although one of the causes of the French Revolution we found it pure joy to stand on a tooth harrow in a drizzle while Old Dobbin pulled us and the implement up and down the road.
Rain was our main grievance but we had others of a minor nature.  We may not have invented ‘portal to portal pay’ but at least we gave it a good push forward.  We insisted, unless called for at the camp in a suitable vehicle – definitely not the manure wagon – and returned in good condition our walks to and fro should be included in the day’s pay.  Present day unions should also be grateful to us for other fringe benefits.  Among these, honourable mention goes to Raspberry Vinegar breaks.  That thirst quenching cordial made bearable the long, hot sulky days in the berry patch.
Protest meetings, Union contracts, and a ten hour day.  What a change for young girls who previous to the cataclysm of World War 1 had spent the previous summers ‘helping mother around the house.’    In pre-war days we swam a ladylike breaststroke in our all enveloping bathing costumes, or batted a few tennis balls on a shady lawn.  For relaxation, after this strenuous exercise we swung in a hammock on the veranda while a young man seated on the steps strummed on his guitar. 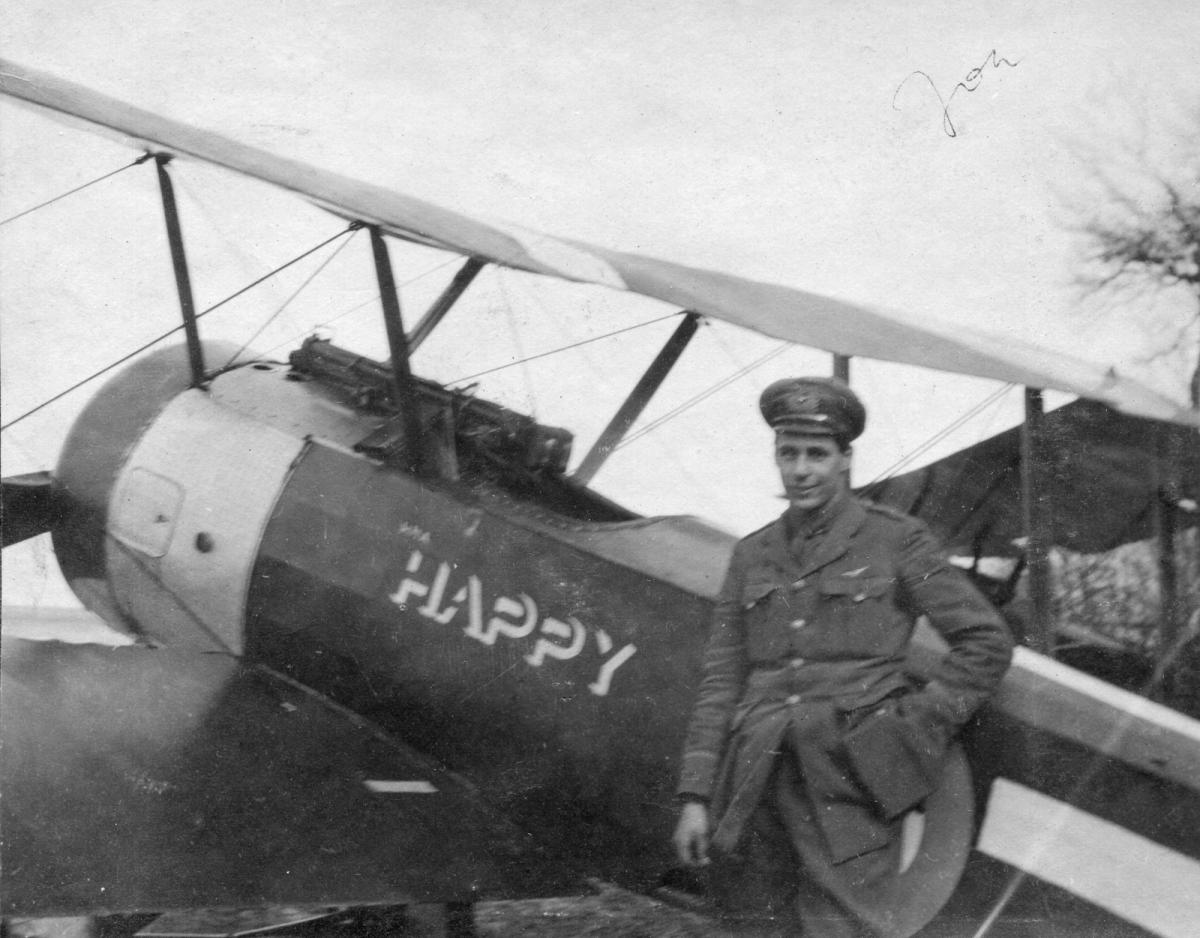 The summer’s schedule was brutally shattered by the war.  We still helped mother, but by long distance methods.  Obeying the Food Board’s order to “can what you can” we deluged our families with bushels of peaches and crates of berries for preserving.  Swimming and bathing were indulged in for purely hygienic reasons.  The tennis racket was replaced by the hoe.  Hammocks and young men were non-existent, the latter being fully occupied strumming machine guns in the French trenches.  Any unfortunate males, wearing civilian clothes we regarded with cruel suspicion.  A buggy ride with one of them was tantamount to fraternizing with the enemy.
This, of course, did not apply to uniformed men.  We were fortunate to have a camp of Air Force pilots in the vicinity.  Their daring exploits in low altitude flying was a source of delight to us and of open disapproval of our chaperone. In those dear dead days of unregulated Air Traffic the pilots would swoop down over our camp dropping notes. These were addressed daringly to the “girl in pink pyjamas in the third tent” or to the “red headed fresh air fiend who sleeps with her head outside the flap.”  We were so shocked at this ungentlemanly prying wild horses couldn’t keep us from the Air Force weekly dance.
After these fledglings of the air had moved on to more thrills in France we found time hanging on our hands in the evening.  To ward off complete mental apathy induced by ten hours of exercise in the fresh air we turned to the theatre.  The result was a variety show complete with negro minstrels and a chorus line of camp beauties.  Our black ribbed cotton stockings (extra service weight) made a big hit in a nearby small Methodist Church where we repeated the show by popular demand.  The “Folies Bergeres” touch of the black stockings added piquancy to our songs which extolled the joys of working on the land.  The words “Oh Strawberry, thou fruit of green and red, when we pick thee, we stand upon our head” sung to the tune of ‘O Canada’ combined patriotism and horticultural know how accompanied by appropriate gestures brought down the house.
The show brought us fame and a chance to explore the surrounding districts.  Bumping over the dirt roads in a cumbersome hay wagon and singing in the moonlight with the scent of the late raspberries and early peaches all around us Flanders Fields and its poppies all seemed very far away.
Was the war just a bad dream and were we driving to a Church Social in a sleepy Ontario village much as our mother and grandmothers had done.

P.S.  the girls in this story founded the University Women’s Alumnae Theatre in 1919.  They performed at Hart House, University of Toronto. Later the theatre became known as the Alumnae Theatre and moved to another location in Toronto.ammoncks