“The Pitch” by Dave Moores

“I have a fully developed plan for a new backup protocol that will prevent any recurrence of this sort of black swan event.  My staff has taken the opportunity to run it past the infrastructure arm of Adventure Consulting.  It’s sound, but of course it will cost.  However the cost is minor.  I’d suggest five million is nothing compared to the lost revenue we just experienced.”
Nobody reacted.  Five million dollars was pocket change compared to, say, the cost of rolling out a new plant in Mexico.
“So let’s talk about the bigger ‘why’, the ‘root cause’ in consultant-speak.  And that’s boringly predictable these days actually.”  Mark was on a roll now.  He could tell that he had his audience fascinated.  He felt a sense of power over them and it was like a drug and he was high on it.  They’d probably never seen anybody act this way.  A few of them had quiet grins on their faces and maybe they appreciated a bit of chutzpah.  At least he wasn’t boring them.  Next slide:
Slide 2: IT. WASN’T. IN. THE. BUDGET.
“We had a top-down-imposed budget cut of 8 percent last year.  We made the case for extra backup servers and it was rejected.”
Charlie Carson raised his hand.  “By whom?”
Okay you SOB, you asked for it.  “Ultimately by you Sir.”
“Mr Williams, how long have you been with Eastern?”
“Eighteen years.”
“Then you surely understand how budgeting is done, and you know perfectly well that I do not personally scrutinize everybody’s annual budget for paper clips”.
“Sir, I promised you root causes.  The budget cuts last year have tied many people’s hands, including mine, from making sensible, responsible investments in our operating infrastructure.  Repeatedly have many of us petitioned you, directly or through your staff, on these matters.  But here we are.”
Derek Short couldn’t sit still any longer.  His face had become a mask of rage.  For Mark, the whole business was worth it just to see him this way, his voice cracking with emotion.
“Charlie, gentlemen, I need to curtail the charade we’re being subjected to here.  It’s totally and completely unacceptable.  I hate to say it, but the truth is that I have for some time had serious doubts about the stewardship of our computing and network infrastructure.  There have been a number of slipups and what happened last October is just the latest in a series.  I don’t know what else to say.”
“Well Derek,” said Charlie quietly, “You might consider saying  ‘I’m sorry’.  And let me ask you, did you review the budget submitted by Mr. Williams?  And did you approve it in its final form, after the cuts?”
Uh-oh, eyes swivelling in the room.  Had Derek Short just dug his own grave?  Derek appeared to realize he had.  He started babbling.
“I accepted the 8 percent cut last year, yes, well of course.  I believed IT should be a good corporate citizen and do its bit, I mean why should we be exempt?  So when the order came down I told all my department heads to step up.  I mean that’s what we all did, right?  Right?”
Nobody met his eyes.  Charlie then asked the killer question.
“So you didn’t actually evaluate where to cut?  You just left it to your subordinates?”  This of course was exactly how Charlie himself had handled the matter with his own direct reports, but nobody was going to mention that right then, or ever.
Charlie waited for an answer.  He appeared prepared wait a while but Mark was not.  This was the moment.
“May I?  I promised a three-slide presentation and my last slide is about where we go from here.”  He took a deep breath.  His finger moved ready to tap the track pad on his laptop but Charlie Carson had seen enough theatrics and just wanted to wrap this up.
“Hold on Mr. Williams.  Derek, it’s quite regrettable that we have a CIO who can only act as a messenger boy, gives his staff no guidance on a matter like this, and then tries to evade the blame.  Mr Williams, please implement your plan.”
“Oliver,” he looked across at the Chief Financial Officer, “have Terry Hartley work with Mr. Williams on the funding.  Be so kind as to get back to me when you’ve done that.”
“Mr. Williams, that was one of the more succinct pitches we’ve seen here.  Cheeky, but it had a certain style.  Now get out of here.  See Arlene on your way out and make an appointment to meet with me right away.”
“Gentlemen, let’s take a break.  Derek, there’s no need for you to participate further today.”
In an a few moments Mark’s world had been transformed. His old rival disgraced.  His future, who knew, but nothing bad he was sure.  He felt about ten feet tall, scooping up his laptop, briefcase, papers and whatnot before leaving the boardroom on a cloud.
A surprised Arlene set up Mark’s appointment with the CEO, raising her eyebrows when told nobody else would be attending.  Then Mark floated down the stairs and out the door.
Mark descended the HQ building’s front steps, and as he crossed the parking lot he gave a celebratory little hop and a skip and dropped the laptop, left powered-up in the excitement.  It unhelpfully brought up Slide 3.  Bluetooth functioned perfectly and the ten kilos of plastic explosive in Mark’s briefcase detonated like an email from God. 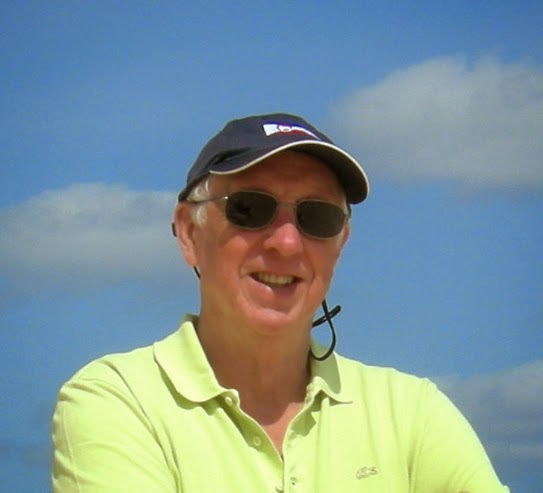 Dave Moores started writing fiction last fall “to see if I could” following a decision to finally retire from the workforce at age 71. Writing in turn is becoming a full-time job and Dave is halfway through his first novel, set in the sailing community in Ontario’s Golden Horseshoe region where he races his own sailboat and lives with Chris, his wife of 47 years.

Dave’s first-ever piece of creative writing — other than activity reports as a project manager — was a Christmas story for his granddaughter Natalie, who is showing promise as a writer herself and naturally gets plenty of encouragement from her Grandpa.
See Brian Henry’s schedule here, including writing workshops and creative writing courses in Barrie, Brampton, Burlington, Caledon, Cambridge, Collingwood, Georgetown, Guelph, Hamilton, Kingston, London, Midland, Mississauga, Newmarket, Niagara on the Lake, Orillia, Oakville, Ottawa, Peterborough, St. Catharines, Stouffville, Sudbury, Toronto, Halton, Kitchener-Waterloo, Muskoka, Peel, Simcoe, York, the GTA, Ontario and beyond.
Posted by Brian Henry at 12:36 PM