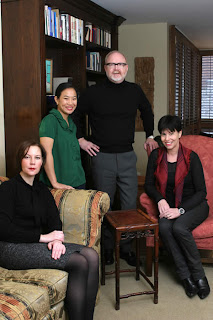 Dean Cooke and Sally Harding, co-owners of The Cooke Agency, announced they’ve formed a new company, the Cooke Agency International. CA International will sell foreign rights on behalf of Canadian publishers and literary agencies. McClelland & Stewart and Random House of Canada will be the new agency’s first customers.
Suzanne Brandreth, the Subsidiary Rights Director for the Cooke Agency, will oversee the new agency. Many Quick Brown Fox readers will know Suzanne as one of the guest speakers at a “From the Horse’s Mouth” seminar I hosted at Ryerson University. Congratulations, Suzanne!
Obviously this new business is good for the Cooke Agency, and I think, good for the publishers, too. Outsourcing the sale of foreign rights and other subsidiary rights will save the publishers money that they can invest in their authors and staff. Also, with the combined Random House and M&S list to play with, CA International should be able to get more attention from large foreign publishers.
Read the full announcement on Canada Newswire here.
Photo left to right: Suzanne Brandreth, Mary Hu (reader), Dean Cooke, and Sally Harding.
About the Cooke Agency: The Cooke Agency, one of Canada's leading literary agencies representing bestselling and award-winning authors from Canada and around the world including Guy Vanderhaeghe, Richard Wright, John Irving, and Sarah Waters.
Unfortunately, The Cooke Agency isn’t accepting queries or submissions except by recommendation. But many agents are actively looking for authors, and keeping track of such agents is one of the purposes of this blog. Check out the list here.
Note: For information about Brian Henry's upcoming writing workshops and courses see here.
Posted by Brian Henry at 2:10 PM