Grandfather's barn was Mary's favourite place to play. Every day when her mom went to work and her older sister went to school, Mary was minded by her grandparents who were both nearing their late seventies. Mary’s grandparents lived on a farm that was located on the outskirts of a small town dominated by textile factories on a busy road leading to the only train station in town. When the train passed by, Mary was mesmerized by its considerable noise and the sight of it blowing clouds of steam and smoke.

Although there were other small farms not too far off, there were no other children to play with. So while Mary’s sister was at school, she had no playmate.

Mary’s tiny and time-bent grandmother seemed to be in perpetual motion of running from one chore to another. Grandmother spent her time cooking, cleaning, feeding chickens, and conversing with Whiskers, her aloof black and white cat. In her constant busyness, Grandmother appeared indifferent to Mary’s presence. In fact, Mary spent the majority of her time with her grandfather, who in turn seemed to delight in her company. He was happy to let his youngest granddaughter hang around him at any time and any place despite the fact that he was always working on some project.

Mary often followed Grandfather around the farm, looking at the cows and watching him work in the greenhouse. Other times she would run around the farmyard full of rusty coloured chickens and imitate their clucking. But best of all she loved to go inside Grandfather's enormous barn.

With the force of her small body she would push open the huge wooden wing of a barn door and step into a world of intensely comforting scents of dust, long gone hay, and warm wood. Streaks of sunlight pushed through the spaces between roughly hewn wooden planks. The sunshine would fill the barn with slanted shiny lines and highlight specks of golden dust floating and dancing in the air. She would sit there captivated, watching the magnificent spectacle.

The barn itself was silent and the only sounds that could be heard were those coming from the outside. Like the streaks of light, the sounds streaming in through the narrow spaces between the wooden boards would arrive in the barn filtered down in muffled tones – the distant barking of a dog, cars passing by, and faint shreds of human voices.

There was a swing in that barn – a gift to Mary from Grandfather. Two thick, long ropes joined by a small wooden board for a seat hung down from the rafters. Mary would sit on her swing and pump her legs back and forth until she had built enough momentum to fly through the sparkling golden air from wall to wall. Grandfather would come into the barn on an errand and pause to give Mary a couple of pushes to speed up her flight. 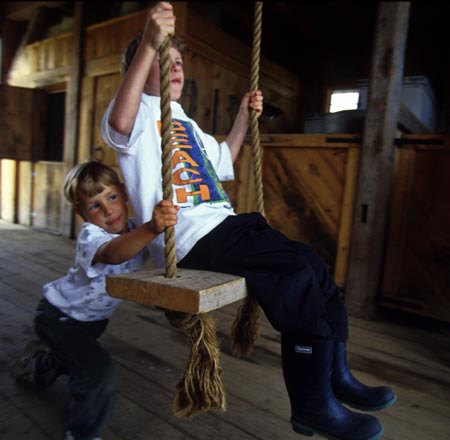 Eventually she would become tired of play and he would become tired of work and they would gravitate toward each other. They shared a ritual which they both cherished. Grandfather would walk into the barn in his worn out work clothes. He would sit down on the wobbly wooden bench that he himself had crafted and motion Mary to sit down next to him. With his big gnarly hands he would dig into the pocket of his jacket and pull out a red apple or a yellowish green pear freshly picked off the trees that grew in the orchard beside the barn.

Next, he would search in the depths of his overalls for a knife. This small folding knife with a wooden handle had a story of its own to tell. It was as old and worn as Grandfather, but Mary thought it was beautiful. The olive wood handle had acquired a sheen that could have only been the result of long years of use. Its worn blade had been eaten away by a flint stone so that it had an appearance of an old tooth, and yet it still served its purpose. Grandfather's weathered brown hands and this knife seemed to have been molded for each other.

Grandfather would pull his knife ceremoniously out of his pocket, slowly unfold the blade from its hiding place, and start to cut up the fruit almost meditatively. Every move was intentional and meaningful. He would cut the green pear in half, and then cut into quarters the first half. After handing Mary a juicy dripping segment of pear, they would eat together in solemn silence.

Next, he would divide the remaining half into two pieces and again share with Mary as they became fully immersed in their silent ritual of sharing. Together they relished the sweetness and juiciness of the fruit and each other's company. Though not a word was spoken, the air between them was full of meaning, communion, and love. 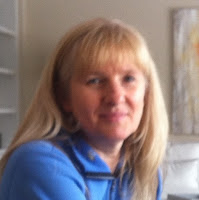 Gosia Kirklewska currently lives in Kitchener with her nine-year-old son. She is a lover of nature, kayaking, hiking, meditation and story telling. She balances her love of physical activity with periods of solitude and meditative silence. Her interest in writing brought her to one of Brian’s classes in spring of 2014 and she has taken numerous classes since then.