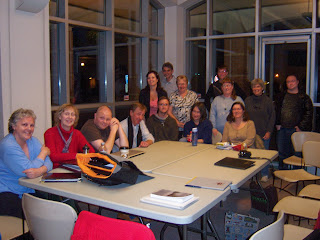 In 1986 Heather Kirk, a published author of young adult fiction and a writing teacher, had just moved to Barrie, and as she put it, “…was getting lonely.” She put out an ad to “see if there were any other writers in the area.”

The first meeting was on January 28, 1986, and three people came out. By the third meeting on February 17, she had a list of about 30 who were interested in becoming members.

During the intervening years the group has gone through many changes and of late has grown into a highly motivated and dynamic force. Some of our members are published authors who are more than willing to share their varied experiences with those just starting out. The club provides a forum for writers where they can meet other writers and tap into available resources, Feedback is provided for works in progress to those willing to share.

We meet twice monthly, generally on the second and fourth Monday evenings at 7:30 p.m. Currently our meeting place is the Barrie Public Library at 60 Worsley Street, in the Georgian International Room.

New members are always welcome. The best way to become involved is to attend a meeting. More information can be obtained by contacting Marilyn Lamb at 705-728-2738
or e-mailing marilyn-lamb@hotmail.com

We host periodic workshops with Brian Henry for members and non-members alike and have been doing so since the mid-1990’s. The workshops provide a terrific learning experience for everyone interested in the craft of writing.

Brian's next workshop with the group will be "How to make yourself write ~ a creativity workout for writers" on Saturday, May 3, 2014. Details here.

Photo: The Barrie Writers' Club, May 10th, 2010 with guest speaker Richard Todd (centre back corner), author of Raincloud, a novel. Click on photo for enlargement.