“One bloody thing after another” by Joey Comeau, reviewed by J. Monica Murphy 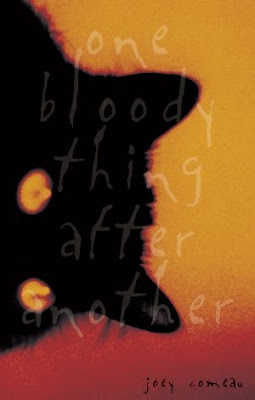 I finished this book, sitting on the deck in the morning sun, with a fresh brewed coffee. If that's not a perfect situation, I don't know what is.

First of all, I love the cover of the book. The picture on the front is unsettling, a wee bit creepy, and definitely intriguing. The title of the book is written in shiny letters, and the cover itself is a matte picture. It's really cool; you kind of have to move the book around to read it. Joey Comeau, the author, is also the creator of a web comic called A Softer World, which is one of my favourites.

This book had me from the prologue, which is titled "Ann's mother isn't feeling so good today." We find out that Ann and Margaret's mother went for a job interview, which didn't go so well, because Ann's mother coughed up something bloody. Ewww... Really? Seriously?

This introduction, written so matter-of-factly that you might have to read it twice to see if you really read what you thought you read, reminds me a bit of Stephen King. You know how he just drops in these gross bits of horror so casually into the conversation  that its not until you've shaken his hand and said “see ya later” that you realize how gross it truly was.

The book follows Ann, Jackie and Charlie, and their families through a short period of their lives. A period during which Ann finds out how far she'll go to support her mom and sister, Jackie finds out how her mom's death affects her, and Charlie loses and reunites with his dog.

This book has more layers than I expected. It’s about love and commitment – the way Ann sticks by her family and goes way out of her comfort zone to protect and care for them. It's rare that you feel sympathetic for someone who does the kinds of things she does, but I did. I empathize with Ann, and I think many people who will find an aspect of themselves in Ann. (But hopefully not a piece of themselves in her mom...)

Jackie is a young girl discovering that she's different from her peers, not least in her emerging sexuality. Charlie is a man who loves his dog and is charged with helping a neighbour find out about her daughter's demise. This aspect of the book really reminds me of the way Robert Wiersema writes. There's such a sense of family and connectedness in this book, you really feel like these are people that you might know and might care for.

The other aspect of the book is the abject horror. Live animals being fed to ravenous beasts chained up in the basement. A young girl with the ability to call up the ghost of her dead mother to help her escape from police custody. A headless ghost with a message for a loved one. I absolutely recommend this book. It’s a quick and horrifying read, something to make you shiver in the middle of a sunny day.

Monica Murphy is a mother of two girls who are in the process of leaving the nest. Words are her thing. She loves reading, writing, and playing with words. Most of her writing is professional; she’s a nurse, specializing in forensic psychiatry and writes a lot about mentally disordered offenders. Monica blogs at http://monalisa1964.blogspot.com/

For information about Brian Henry's writing workshops and creative writing courses, see here.
Posted by Brian Henry at 11:44 AM