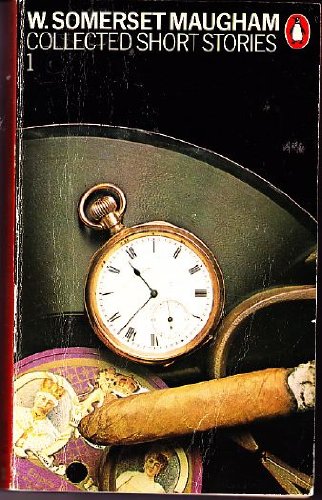 "I have never pretended to be anything but a story teller. It has amused me to tell stories and I have told a great many. It is a misfortune for me that the telling of a story just for the sake of the story is not an activity that is in favour with the intelligentsia. I endeavour to bear my misfortune with fortitude." Thus wrote Maugham of himself in "Creatures of Circumstance".

The Collected Short Stories, in four volumes, 90 stories plus the "Ashenden" series include classics such as "Rain," "The Outstation," "The Four Dutchmen," "P & O," and "The Three Fat Women of Antibes."  And what stories they are! Many have been made into films and television plays.

As each of these typically twenty to thirty page stories will attest, the man was a master story teller with a clear, economical style layered over a frequent undercurrent of irony and resignation. Maugham exploits the strengths and weaknesses (the latter being by far the more interesting) of his characters, living ordinary lives in often extraordinary circumstances against backdrops as varied as England, France, Spain, Malaya and the Pacific Islands. He handles plots adroitly with a wonderful turn of phrase here and le mot juste there.

Panned by the intelligentsia, Maugham got the last laugh, becoming the highest earning British writer in the 1930s. Maugham is no Dan Brown, the master of the frenetic chase, however, but a writer of consummate skill and varying pace.

The Collected Short Stories (available from Penguin Books or your local Public Library) offer great GO Train reading or a thirty minute interlude before switching out the bedside light. I defy anyone who enjoys great writing and clear story telling to put them down.

They should also be compulsory reading for any aspiring short story writer or novelist.

Michael Joll was born in England and spent his early childhood in Calcutta and Karachi. He arrived in Canada in 1973 and worked in sales, then as a police officer, paralegal and as a deckhand on a car ferry. After receiving 0/20 in creative writing at age 18, he determined to become a better writer.  And succeeded. He's the author of four plays for radio, recorded and broadcast on Canadian Public Radio and numerous pieces of short fiction. Currently working on the second draft of his second novel and submitting short stories to contests, Michael is hoping to jeopardize his amateur status.

For information about Brian Henry's writing workshops and creative writing courses, see here.
Posted by Brian Henry at 6:58 AM