Roses caught my eye as I was searching the store shelves for a new read. Its cover is fresh with vibrant red rose petals, framing the title which is fashioned in an old American font. The top of the cover is stamped with “The New York Times Bestseller” while a quote from People magazine frames the bottom: “Like Gone with the Wind, as gloriously entertaining as it is vast… Roses transports.”

Now that is a steep promise. I picked up the paperback and read the summary inside. It even passed my usual test method of randomly selecting passages from the middle of the book to sample the writing style. Everything looked stellar, and I couldn’t wait to get home to start on this six hundred page delight.

The story begins in the early 1900’s when eighteen-year-old Mary Toliver, the younger daughter of an East Texas cotton tycoon becomes the benefactor of her father’s will, much to her mother’s and brother’s shock. Her father made his decision knowing that Mary was the only one in the family who cared about the plantation and was the only hope for his family legacy to flourish into the future. Her mother is furious at her husband for leaving her to depend on Mary for her livelihood, and at Mary for inheriting what should have been hers.

The epic unfolds, taking us into the lives of the two other powerful families in town. These three families had together founded the town in the early 1800’s, built its economy and upheld its society ever since. Mary struggles with loneliness as she is ostracized by her mother and brother. She eventually falls in love with Percy, heir of the town’s booming timber empire. He has secretly adored her since she was a child and has tried his utmost to conceal it, leaving Mary with the impression that he has disliked her for years. Ollie, the heir of the third founding family is also in love with her, but has never shown it, thinking that Mary loves Percy. Mary’s brother, William, and the two other boys have been best friends since they were toddlers.

Thus begins a rapturous read, taking the reader into complicated depths of love, ambition, destiny and propriety. The three boys soon leave for war, and Mary is left to manage the cotton plantation on her own. The story continues through the war, the strained mother-daughter relationship, passionate love triangles, and their aftermaths. The simmering drama does not end with this generation of the three families, but continues into the next two, as circumstances demand desperate measures and sacrifices are made to preserve propriety and sometimes pride.

My own grandfather actually owns rubber, cocoa and rice plantations in South India, and he is faced with the reality that none of his children are inclined towards the business. I can’t imagine his heartbreak in knowing that the family legacy will literally be divided and sold upon his demise. I can see how Mary’s father felt the need to leave his estate to Mary.

I am sure that you are going to love this book, with its southern charm, captivating characters and tumultuous plot. It will be hard-pressed to find a chapter that your curiosity does not devour, and don’t be surprised if, like me, you wish the story never ended. Leila Meacham does a stellar job, and I hope that a good movie maker picks up the book one day, and lets us all experience another wonder such as “Gone With the Wind.” 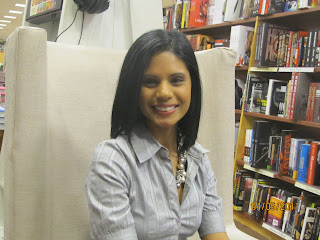 Judy Samuel is recently married and lives with her husband, Eric Lau, in Toronto. Reading has been her passion since as far back as she can remember. She also loves languages, travelling and fashion. In addition to being an aspiring writer, she also owns her own jewellery business as a Stella & Dot stylist. (See here.)

You can read another of Judy’s book reviews here.