Invasion of the Snotty Badgers by Karin Weber 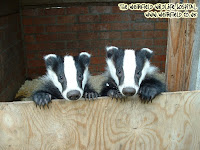 At first she thought they were raccoons; the spilled garbage and nightly caterwauling under the hedge. The next morning clumps of grey fur were lodged in the armpits of her garden angel. Raccoons for sure.
Luckily they ignored her garbage, and went can tipping next door. Pizza rinds and baloney wrap festooned the shared chain link fence like punk Christmas lights. The neighbours cleaned up their side. They copied her garbage security system of bungee cords, yet night after night their garbage was chosen.

Actually it was irritating. Her can, with its smears of organic humus and tofu, just didn’t rate for raiding. She glared out the window at midnight. To her surprise the raccoons were flat and had stumpy tails. Badgers! In suburban Canada? How exciting!

She googled Badgers. They couldn’t yawn but they liked corn and mushrooms. She made a portabella stew and promptly threw it out. The next morning an empty bacon package was left under her car. She felt angry. She adored Nature, religiously recycled, shopped organically, left miniscule footprints wherever she trod, and the Peaceable Kingdom up and supped on crappy food next door.

She put out fresh corn only to be greeted by shredded Pop Tart boxes on her patio. She raged. Time to shop for new tactics: Fruit Loops and Cheez Whiz. While mixing them in a big bowl, she casually licked a finger. Then, as if she had become someone else, she took another intoxicating taste.

Karin Weber is a writer and visual artist. "Invasion of the Snotty Badgers" won the Writers' Union of Canada's postcard story competition. Check out three poems and three photographs by Karin here.

Note: For information about Brian Henry’s upcoming writing workshops and classes see here.
Posted by Brian Henry at 10:10 AM 1 comment: