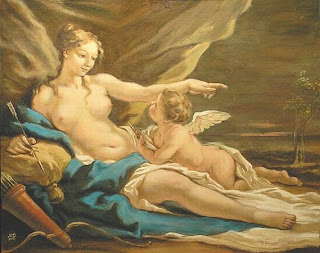 Sitting innocently in my car,
weaving my way through rush hour traffic,
distracted and crunching on a tart Macintosh.
She silently, invisibly, slinks through the
sliver-crack
of my open window.
Gliding across the breadth of my shoulders,
licking Her way up the back of my neck,
She slides seductively across my jawline,
rises up to my ear and
whispers, hotly,
Your life
is your sacred space.
And She is gone.
I blink once,
slowly,
deliberately.
My eyes open to a
whole
new
world.
She is in everything I see.
She is in everything I hear.
She is in all that I touch,
all that I taste,
all that I smell,
all that I know.
I see the jewel of Aphrodite sparkling
in everything I behold.
The world becomes precious to me
in a heartbeat
with Her
in it.
I am home.

Posted by Brian Henry at 4:04 PM No comments:

I knew I was in trouble when the pillow started slipping. Mrs. Greenspan, the wardrobe assistant, had just finished pinning up my hair and I suggested she secure the strap tighter. She patted my opulent bosom with a reassuring, “You’re fine, my dear.” Then added, “If we pull the strap any tighter across your midriff, it will leave a dent. The director’s orders were to make you look like an opera singer.” She cocked her head. “And you do look large enough for one.”

I loved amateur theatre, and that fall when my grade nine teacher announced a drama class, I eagerly joined. For five months, we practiced diligently for the annual year-end school concert, culminating in a successful dress rehearsal.

Finally, it was on opening night. There I was in front of my family and friends, and I was playing opposite, Kevin, the best looking boy in school.  I thought Kevin would laugh when he saw my high-necked, salmon-coloured dress stuffed with pillows and dragging on the floor, but he looked equally strange. Wearing football pads under a white shirt and a black jacket two sizes too big for him, he resembled a crash-test dummy about to run into a brick wall. His head and shoulders moved stiffly as one, and his string necktie seemed to be strangling him. Would we pass as soprano and tenor?

The play was a take on a talent contest with a variety of acts: a spinning ballerina, a tap dancer, a frantic hip hopper, a comedian, a pop singer, a baton twirler and us - the hopeful opera duo. Sitting in a row of chairs, lined up in the middle of the stage, we all waited for our turn to audition.  After each performance, the audience clapped politely. Kevin and I were last in line.

Finally it was almost our turn. Kevin gallantly (and briefly) took my hand as I stood up.  I was feeling quite confident until I took my first step forward and that’s when I felt my front pillow drop an inch. I had four more steps to centre stage, enough I figured, to cause my stomach to fall completely to the boards.

Puccini’s noble music swelled. It was our cue. Kevin stepped up and flung his left arm out from his oversized shoulders and chest. Tentatively, I took another step, then wrapped both arms protectively across my front. Would it be enough to keep me together? I glanced over at the wing where the director was gesturing wildly for me to lift my arms. A trickle of sweat rolled down my forehead into one eye, no doubt leaving a white trail in my makeup. I blinked at the audience, took another step and began drawing in my breath for the aria. I gasped as the pillow, tied to my backside, started its slow descent.

Kevin twisted around to see why I was not keeping up with him and saw me whip my left arm behind my back to grab a fistful of flopping salmon. A strangled note escaped from my throat as I glanced desperately at the director who was now pumping his arms up and down gesturing to me to lift my arms. Alas, although I’d memorized the grand movements of divas, my arms were busy containing unruly body parts.

A titter came from the audience. The comedic parts of the play had already been presented; my part was serious. My voice cracked again as I attempted to lift my bosom back to its appropriate place and, with the other hand, tried to hold up my posterior. Kevin, singing loudly and raising his arms aloft, saw my plight. My face felt hotter and I knew it was turning red under the rivulets of sweat; he would never ask me out now.

A pin flew from my up-do and a thick strand of hair escaped. The tittering from across the footlights changed to laughter. It rose louder when Kevin reached out to grab my falling bosom but snatched his hand back abruptly before he got a handful of me under the collapsing dress. Meanwhile, I was contorting myself in vain trying to control the activity of my front and back pillows, which, being feathers rather than foam, had a mind of their own.

Another hairpin let loose and a large clump of hair tumbled down to rest on my sagging shoulder. The laughter swelled to loud guffaws and Kevin’s broad smile had turned his usually rounded notes into a wailing siren. The director was now holding his head in both hands; was he laughing or crying?

At that precise moment, I made my decision. Finding my voice, I joined Kevin in the last musical phrase as I twisted and turned in mock horror, while grasping and yanking at my falling anatomy. The higher the notes climbed, the lower the pillows sank and, as the final crescendo sounded, I raised my arms high. Then I reached down, swept both pillows majestically up into my arms, and, as the curtain fell, made a grand and awkward curtsey to a standing ovation.

Note: To get to the main page, click the Home button at the bottom of this page, or you can go straight to another story by going to the blog archive at the top of the page on the right and clicking on any story.
Posted by Brian Henry at 3:09 PM No comments: