When I was a first year student nurse, my classmate Ann and I were assigned to the same surgical rotation – early mornings before classes started. Our first day, the head nurse – a matronly battleaxe with little patience for nurturing young Florence Nightingales – welcomed us coolly and assigned us to give morning care to a very sick patient in room 210.

Room 210 turned out to be a Mrs. Havelock. Her only response to our cheery good morning was an involuntary moan, so we set about assembling the towels, soap, and basin for the bed bath.

“Look how yellow her skin is,” I whispered to Ann as I removed her gown, folded down the bedding and positioned the flannel bath sheet. I had never seen such yellow skin.

We were almost finished when the door creaked open and in strode her surgeon Dr. Farley and the Head Nurse. Ann and I backed up to the nearest wall but watched intently as he lowered the bath flannel and exposed her firmly rounded abdomen. Skillfully he prodded, poked and tapped the big belly.

“All we can do now is to maintain her comfort,” Dr. Farley said, “and pray for a miracle.” Then they left.

We crept back to the bedside.

“Wonder what he felt?” I asked Ann.

“Let’s find out,” she replied.

Clumsily we prodded, poked, and tapped the unconscious body, in earnest mimicry of Dr. Farley’s actions.

Suddenly Mrs. Havelock came to life. Her arms and legs jerked violently and her head bobbled while the whites of her eyes flashed up at us.

“Oh my God!” I yelled, and ran for the head nurse.

Real nurses and doctors barreled into the room and we were quickly hustled into the corridor. The chaos was still in progress when we left for class. Later we heard that Mrs. Havelock had died and her autopsy was the next morning.

“Do you think we killed her?” we asked each other. Terrified and uncertain we decided that our best defense was to go to the autopsy and find out. We got permission to attend only because we had been assigned to her care.

The next morning I stood trembling alongside the autopsy table with clenched hands, willing myself not to throw up, not to pass out, and not to do anything else that would embarrass me while amusing the others present. The assistant snappily folded the sheet to the corpse’s knees and exposed the abdomen. I took a deep breath.

The first cut ran from sternum to pubic bone and the second went horizontal to expose the ribs. Goosebumps erupted on my body. The bone saw screeched as it freed the rib cage so the assistant could lift it out and expose the thoracic cavity. I gulped and concentrated on breathing.

Busy hands were separating the skin, fat and muscle before delving into the cavity. Then the pathologist pointed out the cause of death…a gnarly tumour bigger than a large grapefruit pushed upward from a tiny ovary.

Thank God! We hadn’t killed her after all.

I tuned in again to the pathologist’s voice as he described other involved organs and freed them from the invasive cancerous growth. Before long, I became lost in the wonder of the master plan of the human body. It is the ultimate work of art. Glistening organs nestle into their special place. They glide effortlessly over each other in normal function. Each one works independently yet they synchronize with each other to produce homeostasis of the human body. Then layers of muscle, fat and skin protect it all from outside harm. I was awestruck by the most sophisticated, efficient machine ever conceived.

A couple of hours later in the cafeteria lineup for lunch, Ann and I chatted with relief and even laughed about our foolish imagination.

“No thanks,” I responded to the server’s query of liver or sausage for an entrée. “I think I’ll just have an egg salad sandwich please.”

That experience lives in my memory as the greatest anatomy lesson ever, and I thank Mrs. Havelock for her contribution to my education. Much later in life it occurred to me that no matter what the size, shape or colour of the package, our similarities inside are so much greater than our differences.

Nevertheless, even to this day I don’t eat liver or sausage.

Note: For information about Brian Henry’s upcoming writing workshops and classes see here.
Posted by Brian Henry at 8:19 AM 1 comment:

the aching cry of the loon
haunting reminder of simpler times

I long for simplicity.

The absence leaves an echo in my heart. 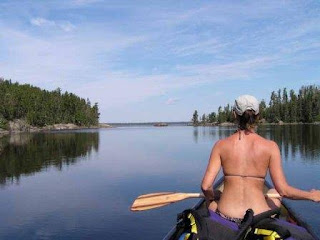 Tabitha Kott lives a quiet life in an ordinary Mississauga neighbourhood. Her passions include urban farming, ecstatic dance, expressive creativity, and pushing the edges to see what she can find. Tabitha wrote “Longing II” in one of my creative writing courses in Mississauga last fall. She submitted it to the Ontario Poet’s Society Open Hearts poetry contest, where it won an honourable mention.
For more on the Ontario Poety Society Contests, see here: http://www.theontariopoetrysociety.ca/Contests.html
Posted by Brian Henry at 8:30 PM 1 comment: