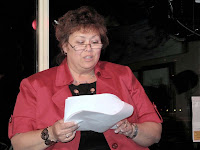 Fran MacKenzie is an American transplant who was born in Japan and grew up in Kyoto, in the deep south, and in upstate New York. She’s now settled in Ancaster with her son, husband and two dogs. Her other son decided to be nice to her. He moved out and created his own family, giving her the little girl she never had with her grand-daughter Morgan. Fran has won the title of National Fleet Manager eleven times for Chrysler Canada and been a master member for 15 years. Sounds dirty, doesn't it? Now, she has gone back to her first love: writing. On June 18, 2009, she gave a reading of "Diving For Pearls," at CJ’s Cafe.
Note: For information about Brian Henry’s upcoming writing workshops and classes see here.
Posted by Brian Henry at 1:03 PM