"A Thorn in the Flesh," Deborah Serraville 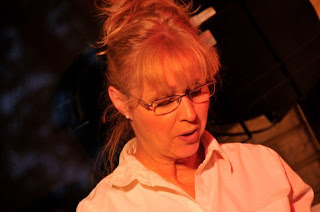 From Alistair’s Daughter
by Deborrah Serraville

Alistair McCauley walked out of the shop. As the door closed, a bell chimed and stopped short as though startled, releasing a vacuum of air that spiralled around his feet and up his back. It smelled sweet compared to the cocktail of chemicals he used to clean and repair typewriters. The alcove was shaded and cooler than the street, so he stood for a moment and pondered which direction to turn. Retrieving his wristwatch from his trousers, he strapped it on and checked the time – 1:05 p.m. Unlike the other guys, he liked to work Saturdays. It was only half the day and the extra money came in handy. Besides, the shop was quieter. It moved to a different rhythm and so did Alistair. More relaxed, more focused. When possible, he saved his difficult, intricate repairs for Saturdays.

Alistair took a pack of Black Cat’s out of his shirt pocket and lit one up. He could go home, but then he remembered Lily was at work. Or did she say she was off to the shops? No matter, she wouldn’t be home. Lily. What was he to do about her? The memory of their last attempt at love-making rose up like bile, and he choked it down as he flung away the extinguished match and stepped onto the sidewalk. Casting a glance north on John Street, he reconsidered, turned left towards King and fell into line with the crowd of Saturday shoppers. If he went home he could help Kevin work on the basement project. He enjoyed the camaraderie with Kevin, watching their ideas and efforts unfold; take shape. Buried within Alistair was a need to create, but he thought self-reflection weak or worse, feminine. “What man didn’t like to see his home transformed by his own hand? It’s as simple as that!” He would have said, if put to the test. But today Alistair felt restless, uneasy, and the idea of working with Kevin held none of its usual appeal. Throwing his butt away, he picked up his pace. As he came to the bus stop he hesitated, then continued on. Maybe he’d stop for a beer before heading home.

Standing in the doorway of the Red Lion Inn, Alistair allowed his eyes to adjust to the dim light. His nostrils flared at a palpable odour emanating from the carpet and upholstery. Stale beer and cigarettes; late night rendezvous’ and lies. The contrast to the fresh summer air was so great, he considered turning around, but didn’t. Beads of sweat had formed on his brow on the brisk walk, and he ran his hands through his hair, shoving back a drooping forelock. Spotting an empty stool at the far side of the horseshoe bar, he made his way over. In the centre, Gabor the bartender washed and arranged beer glasses. The sight of the older man was a comfort. Always welcoming, he never said too much. Alistair was seated before Gabor noticed he was there.

“Hey Scotty, how ya doin’?” He said and looked up. A surprised grin on his face, Gabor sounded as though he was perpetually choked, coughing out each phrase as if it might be his last.

“Hot and thirsty, Gab – how about a couple of tall cool ones?” He replied, slapping the bar.

“Comin’ right up!” Gabor dried his big hands on a towel and skilfully drew the beer, finishing off with the perfect amount of white, frothy head.

Alistair wondered about Gabor’s life away from the bar. Like Alistair, he was an immigrant. Alistair was grateful he hadn’t had to struggle with a new language as Gabor must have. Did he have a wife? Children? Gabor put the beer in front of Alistair and returned to his tasks.

Alistair guzzled the first one, tipping the glass straight up to suck back the last couple of drops. His Adam’s apple bobbed rhythmically with each swallow. Closing his eyes, he lit a Black Cat and exhaled smoke and the pent-up energy that had pestered him all morning. Then he drank half of his second beer. It worked its magic. The buzz of alcohol, along with the unintelligible hum of conversation, anesthetized the chronic ache he bore like a thorn. Why was he never happy, satisfied like other men? Everything was going as planned – a fresh start in a new country with a beautiful wife, a good job, and a respectable number of friends. Why did he feel he was limping through life when he should be running? Alistair swallowed the last of his draft.

On cue, Gabor took the empties. “Another one Scotty?” He asked, lifting his brow.

“Why not?” he replied, stubbing out his unfinished smoke.

Alistair looked around the darkened room while Gabor pulled his third draft. The only indication of mid-day was the sparse amount of patrons. Tonight the place would be packed. A man seated across the bar struck a match, catching Alistair’s attention. His hair was jet black, peppered grey at the temples; his skin swarthy. Alistair wondered if he was Italian. The man looked up and held his gaze. Feeling like a school kid caught cheating, Alistair looked away. Gabor placed his beer down, the solid clunk of glass to wood breaking the spell. He sipped it, thankful for the distraction.

Alistair’s eyes wandered back to the man, who nursed a squat glass of amber liquid, perhaps Scotch. Running his middle finger around the rim, he raised it; a drop of the nectar hung full and redolent from the tip. Mesmerized, Alistair watched as he shot a pointed tongue out, scooping the droplet. What happened next, Alistair would replay in his mind over and over in the years to come like a skipping record on a phonograph. The man looked up, their eyes locked. Alistair dangled there for a moment, more precarious than the Scotch, as the man delicately licked and then sucked his finger, engulfing the entire digit in his mouth. With a tender smack, the finger was released along with a sigh of satisfied pleasure from the gentleman.

The blow to Alistair’s system was like a sucker punch. Heart hammering, breath uneven, he placed both hands over his face and bent his head. Every blood vessel and nerve ending was on alert. His hands trembled and his legs felt as though the bones had disintegrated. Perspiration broke out on his forehead. He wiped it off, and then drew his hands along his thighs. He could see his trousers groaning at the crotch. It wasn’t illness that threatened his equilibrium. Long seconds passed. Surprise and revulsion whirled around in his mind challenging his arousal. Like oil and water they couldn’t be mixed and Alistair knew he must choose.

With a soft groan, he raised his right hand and massaged his eyelids, pinching the bridge of his nose. How could this be happening to him again? He had been so confident these times were behind him, left in Scotland along with the rain and dampness. Alistair’s shoulders slumped, the weight of temptation adding years to his youthful frame. A few seconds passed and he looked up.

Gabor had his back to him, tending bar and the dark haired man was in the midst of finishing his drink with such earnest, for an instant Alistair wondered if he’d imagined the encounter. Then as the gentleman set his empty glass down and started to get up, their eyes met again. A slow, smile stretched across the man’s face, and Alistair knew he was finished. Turning from the bar, the man walked towards the Men’s Room. He glanced back once, before pushing the door open. Alistair took a fiver out of his wallet and placed it on the bar. Without saying goodbye to Gabor, he slid off the stool and followed.

Deborah Serravalle is a Burlington based freelance writer who winters on Fripp Island, South Carolina. She lives with her husband, two dogs and a malicious cat. Her otherwise empty nest is soon to be re-furbished when her son moves back home, this time with his lovely wife, and returns to university. Currently, Deborah is researching a new novel, The Basket Weavers. Based in South Carolina, this story shines a light on individuals thrust to the margins by those more powerful, revealing the strength and resolve of the human spirit. She orah is also re-writing the first draft Alistair’s Daughter. Deborah gave a reading “A Thorn in the Flesh” from Alistair’s Daughter at CJ'S Cafe on June 10.

Note: To return to the main page, click here, or you can go straight to another story by going to the blog archive at the top of the page on the right and clicking on any story.

For information about upcoming writing workshops and classes see here.