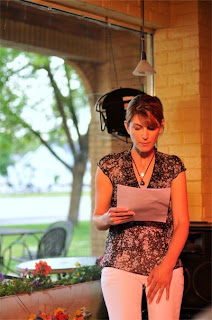 From The Ming Bowl
by Jennifer Bushman

Han was married on a cold, sunny day. Wutang and his wife, Ailian, accepted my parent’s offer to hold the wedding at our house. Wutang seemed pleased with the idea, and I heard my mother say it gave the Li family “face.” As for my parents, they were glad to put the Bauman incident out of their minds and concentrate on planning Han’s wedding, however much they disapproved of arranged marriages.

I asked my parents how they could so readily help out with a ceremony they thought was a mistake. My mother’s answer was curt; she was busy with all the arrangements, and I had interrupted her. “Han must learn to put up with what can’t be helped,” she said, “just like the rest of us.”

My father averted his eyes and said something about it being all for the good.

Disgusted with both my parents’ answers, I flounced off to my room. There, I rolled back and forth on my bed, feeling real suffering at the thought of Han being absorbed into China’s ancient ways, becoming one with a people I was just beginning to realize would never fully accept me.

As it turned out, the “Christian-Chinese” wedding was confusing to most of the guests, who managed to enjoy themselves anyway. My father officiated over the young couple’s Christian vows. Miss Ding had approached the house in the traditional red chair; the banging and clashing of musical instruments – faint, in the distance, then louder, closer – signaling her approach. To add to the commotion, several of the Li cousins had lit a long string of firecrackers on the outer courtyard paving stones. As the bridal procession came into sight, the firecrackers jumped and popped. People grinned broadly or laughed out loud. Some held their ears. Small children giggled and danced and shrieked. A smoky mist from the firecrackers drifted across the courtyard.

The servants spread a piece of carpeting on the ground for the bride to walk on as she stepped out of her chair. She looked lovely in a white Western-style gown and veil that seemed to rise in a cloud around her, contrasting with her dark hair and eyes. I would have thought the bride intimated by the noise and attention, stepping out of the seclusion of the chair to see so many strange faces, some of them foreign. But Miss Ding wore bright-red lipstick like a banner – she had obviously been victorious after a long battle with her mother – and her black eyes danced with mischief and triumph through the almost transparent veil.

There was another burst of music and a clash of cymbals. The guests crowded into the main room, pushing each other in their eagerness to see the bride. Even Little Gao was there as a cousin of the Li family. I saw him hurry by, joking noisily with a friend, his expression giving no indication that he was embarrassed or angry over losing his job.

I watched Han’s mother, Ailian, hurry forward through the crowd, a pleased smile splitting her plump features. Her modern-style silk dress, with short sleeves and a high collar, was too tight, but otherwise she looked pretty. For several weeks, Ailian had been telling people her new daughter-in-law was modest and dutiful. I wondered what people thought at the wedding when they saw the bride with her lipstick and her mischievous eyes. Maybe Ailian was merely putting the best face on the situation, I thought. Wutang also was grinning, but then, why shouldn’t he? He had honored his father’s wishes. He kept darting glances at elderly Mr. Ding – his father’s contemporary – as if to say, “You see? My family has kept its promise.”

Old Grandfather sat inside, impassively accepting greetings and congratulations from the steady steam of guests who approached him; he was not happy that the wedding was part Christian. He wore a plum-colored robe with side fastenings, a cap, and soft Chinese shoes. My mother had taken me up to greet him when he first entered the house, supported by Wutang and one of Wutang’s brothers. I had bowed to the old man, trying to keep my anger and dislike from showing on my face. I knew I would never forgive him for forcing Han to go through with this marriage and possibly ruining his life. I also knew my opinion on any subject was worth nothing to Old Grandfather, who saw me merely as a female “foreign devil.”

Most of the wedding guests were Chinese, though Ambrose Varley was there because he was a special friend of Han’s. My friend Frances Appleton also was a guest at the wedding, along with her missionary parents. As soon as the Appletons entered the room, Frances spotted me and grinned excitedly. We had both been part of the mission since we could remember, and, because we were the same age, had practically grown up together.

Frances slipped from her parents’ side and hurried over to me. “Don’t you just love weddings?” Even Chinese ones? I cannot wait until it is my turn.”

“That’s all right. I already know whom I’m going to marry.”

“I suppose it’s Will.” Frances didn’t make any secret of her admiration for my brother. I knew that Will barely noticed the plain-face Frances.

Frances’ face fell. “Shh. Don’t say anything.” She glanced around. “I’d have a real American wedding, though. I’d wear a white gown like Miss Ding, only much finer. And I’d be married in a church, coming down an aisle.”

I said nothing, but knew that if I married, I would prefer a partially Chinese wedding like this one. I thought, the ceremony would be Christian too, but I also approved of the Chinese traditions. I rather liked the notion of riding bumpily through the streets in the sedan chair, my face covered in a red veil; the world seen through a reddish haze. According to custom, I wouldn’t take the veil off, but would allow my bridegroom to remove it in the privacy of our room. In my mind, the unknown bridegroom had Han’s features, and I pushed these out of my mind and determinedly gave the man the face of a stranger. As in traditional China, he wouldn’t have set eyes on me before. Full of unbearable curiosity and nervousness, he would slowly lift my veil –

“What are you smiling at?” Frances wanted to know.

I couldn’t explain how funny I found the idea of the poor Chinese bridegroom lifting the veil and discovering his bride was a foreign devil. To avoid answering Frances’ question, I said, “Do you understand this ceremony?”

“No. I think’s boring.” Frances stood on tiptoe and strained to see through the crowd.

I caught a glimpse of Han’s face. Unlike everyone around him, he wasn’t smiling. Well, he hadn’t wanted to marry, I thought. I felt another surge of anger at Wutang and Ailian, who were grinning so broadly.

Earlier in the day, I had cornered Han in the courtyard and said, “I wish you happiness.” I stood still, waiting for his response and had been taken aback when he had not replied or even met my eyes.

Finally, he said, “I am not concerned with happiness.”

Han raised his eyes and stared over my head. A gust of wind swept into the courtyard, touching my cheek, then rattling the dried leaves of the past season. The wind went on to ruffle Han’s hair. I shivered. It was as if the breeze were somehow bringing us together. I glanced up at his eyes, but he still refused to look directly at me. I thought about the bridal bed at the Li home, and imagined Han and Miss Ding in it together. No, I thought, pushing away the image. This is all wrong. I hated that silly Miss Ding, and shivered again at the thought of Han stretched out in the traditional bed. A great, carved Chinese bed, I knew, was a private world where you keep your most necessary possessions and draw curtains against everyone else. When Han climbed into the bed that first night with Miss Ding, I would be among all those stranded outside.

Above our heads, a bird darted from the tiled rooftop to the paving stones, then back to the rooftop. Han kept his eyes on the bird while he said, “Today, I will do my duty to my family.”

I opened my mouth to speak, but Han forestalled me. “Soon, I will do my duty to my country.”

I looked up again and this time he looked directly into my eyes. “Your eyes are very blue,” he said.

“Shhh. You are still my little sister.”

He might have said more but we were interrupted by Little Gao and another, more distant, Li cousin, who leaned together against the house, out of the wind, and lit cigarettes.

I turned back to Han, wanting to ask him what he meant, but he signaled to me to be quiet and moved swiftly back to the house.

The wedding ceremony was almost over. Han and Miss Ding had signed the scrolls. My father was saying some words over their bowed heads. Someone moved and blocked my view of Han’s face. The murmur of voices rose. People crowded closer.

A burst of music. A clashing of cymbals. Han was married.

Jennifer Bushman is an American who has lived in Oakville for almost two years with her husband, Kevin, and their two children. Thirteen years ago, while her mother was battling cancer, Jennifer and her mother co-authored a novel about China called Hard Sleeper set in 1930s Peking and Shanghai. After her mother's death, Jennifer self-published the book and it was a Second Place Winner in the 2003 Readers Preference Editor's Choice Award for History. She is now attempting to re-write the novel in hopes of having it published by a big publishing house so she can sell more than a few copies! The novel's new title is The Ming Bowl. On June 10 at CJ’s Café, she read this excerpt, “Han’s Wedding”