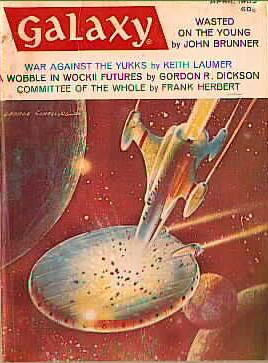 RosettaBooks, a pioneer in digital publishing, has announced The Galaxy Project, a contest to discover science fiction writing talent, in conjunction with its release of new electronic editions of selections from the classic science fiction magazine Galaxy.

The winning writer will be guaranteed e-book publication as part of The Galaxy Project collection, a set of the top novellas that appeared originally in Galaxy, and will also receive a $1,000 advance against royalties of 50% of net receipts to 2,500 copies and 60% of net receipts thereafter for world English digital rights.

Founded in 1950 by H.L. Gold, Galaxy was an immediate artistic success and published the notable science fiction writers of its time. Recognized for the acidly satiric, sometimes profoundly comic aspect of its best contributions, Galaxy had a lasting effect not only on science fiction but also on literature overall. Its standard was excellence in writing.

The Galaxy Project judges include Robert Silverberg, author of more than 40 novels and 250 short stories in the genre and winner of the Nebula, Hugo and Locus Awards; David Drake, author of the Hammer’s Slammer series that originated in Galaxy magazine, quickly moved to novel form; and Barry N. Malzberg, whose Beyond Apollo won the first John W. Campbell Memorial Award for the best science fiction novel of the year in 1973.

Authors will retain the copyright and all rights other than the initial digital use. For more information about The Galaxy Project writing contest and for a contest submission form, see here.

To keep up to date with all the annual writing contests in Canada, get the 2011 Canadian Writers' Contest Calendar – now just $13 including tax and shipping (or $10 at any of Brian Henry's workshops or classes). To order your copy, email brianhenry@sympatico.ca  More details here.