You're invited to the launch of A Private Man, a detective story by Chris Laing. 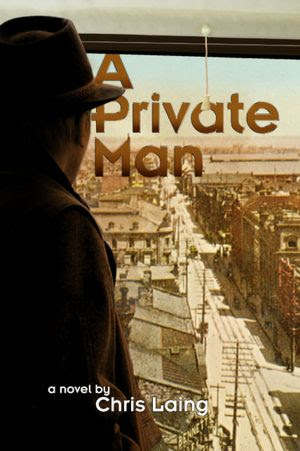 Hi, Brian.
Seraphim Editions is launching six new titles on its fall list including my debut novel, A Private Man.

Both events are free and refreshments will be served.

All the best,
Chris

About the book:
"July, 1947. And hotter than hell in Hamilton." So begins Chris Laing's novel about the exploits of Max Dexter, former RCMP officer. Max, an army veteran recently discharged and limping from a serious war injury, returns to his hometown to open his own private detective agency. But he gets more than he bargained for when he takes on a missing person case for an affluent new client. Soon more than the weather is making things hot for Max and his comely new assistant, Isabel O'Brien. They become involved with arson, art theft, murder and money laundering. The trail leads through the mansions of high society and along the gritty streets of Hamilton to a rip-roaring climax in Niagara Falls.

“I love a good historical mystery novel so for me A Private Man hit the spot.” – Brian Henry

About the Author:
Since his retirement, Chris Laing has expanded his long-time interest in detective stories from that of avid reader to writing in this genre. His short stories have appeared in Alfred Hitchcock's Mystery Magazine and Hammmered Out as well as online journals including Futures Mystery Magazine, Mystical-E Magazine and Flash Me Magazine. His short story Golden Opportunity will appear in the anthology Best New Writing 2013, to be published by Hopewell Publications. A Private Man is his first novel.