“The Sand Timer,” by Shazia Afzal

She walked into her bedroom closet, flicked on the switch, scaring the darkness away and looked at her clothes. Her abayas (long gowns) were hanging at the end, followed by traditional Pakistani dresses and then pants and shirts. Maybe she could take one of her shalwar qameez (pants and shirt) for show and tell.

She believed in being true to herself, so when she’d come to Canada twelve years ago, she had decided not to change her cultural dress just to get a job, and it was a good decision because the public school board readily hired her. Her clothes represented her, but not anymore. Maybe she should give them away in charity so someone else could benefit from them after her death.

She raised her gaze towards the top shelf, where religious books were lined up that had changed her life. They couldn’t change her life anymore or lengthen it so maybe she should donate these books to the library, too. She jerked her head as if trying to get the thoughts of death out of it, turned off the light leaving her personal belongings in the dark and walked slowly to her study room, putting her hand on the wall for support. The fatigue from the chemotherapy sessions was still hindering her normal activities.

The assignment for the writing therapy class was to find an object that represented her and to write about it. Maybe one of her professional books would work, so she looked at her bookshelf, tilted her head to read the titles on the sides. The more she read the titles, the angrier she got. What use were all these books and her education or her teaching skills when she couldn’t use them anymore?

She sat on her knees to see the picture books collection in the bottom shelf. She pulled out her favourite book Ruler of the Courtyard by Rukhsana Khan but shoved it back, knowing that she might not have another chance to read this book to children.

She struggled to her feet and turned towards the closet, opened it and looked at her junk collection that she wanted to use in her Montessori classroom. What good was all this material now that she had to quit her work and didn’t know if she would ever go back to it?

She clenched her teeth and took deep breaths so she could stop herself from crying, and instead turned all those emotions into anger. This writing assignment wasn’t healing her, it was causing her more pain to go through her belongings probably for the last time. Maybe she should just not go to class this week. Maybe the chemotherapy was enough to heal her disease.

She shook her head again, determined not to give up so fast; if she had gotten a job wearing the shalwar qameez then she could surely find an object to share with her class. She pulled out a metal box labelled miscellaneous to see if any trinket would be worth relating to.

There in between knick knacks was a sand timer that had come with a word building game years ago. She pulled out the timer, placed it on her desk and stared at the yellow sand flowing from the upper bulb to the lower one. As the upper bulb was getting empty, she felt anxious about the passage of time, her life. She had been diagnosed with stage 3 cancer and the results of further tests would decide whether she should undergo treatment or just go for palliative care. 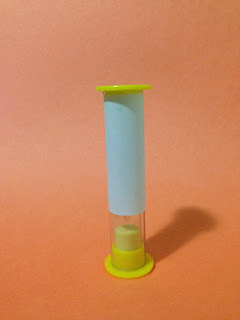 The timer represented her life, except that she didn’t know how much time she had to live. She picked up the timer and curled her fingers over the upper part of the tube so that she couldn’t see how much sand was left.

As her mind was racing, so were her hands as she taped a white strip of paper around the timer and then turned it over, hiding the upper bulb with the paper and started looking at the sand trickling down.

A smile spread over her face. She had found something to share with her cancer-mates and talk about.

She opened her laptop but before she could start typing she saw a news alert on her homepage. A twenty-five-year-old woman was hit by a car and died at the spot in Mississauga. The thought of death came to her again as she leaned back in her chair and looked at the timer. Did the woman know she would die in a car accident? How was her life different from that woman’s except that she was forty-one and she was still alive.

Somehow her positive thinking bulb went on as she sat up straight, took a deep breath and started typing for her show and tell:

My life is like everybody else’s. No one knows how much time they have. I have decided not to worry about how much time is left, and instead focus on doing what pleases God and what benefits others. If I am destined to die of cancer, I can do nothing about it. The only thing I can control is how I spent my life. I choose to live happily and help others in any way I can.

The clicking of the keyboard kept going on and so did the healing.

Shazia Afzal is an elementary and Montessori teacher and a cancer survivor. After attending a workshop with Brian Henry on writing memoirs, she joined the creative writing class. She wishes to write picture books for children and a memoir of her cancer journey. She lives in Mississauga with her husband and two children.