Dear Brian,
I learned so much from attending 3 or 4 of your workshops, thank you Brian. The fire in my belly never went away, even when I moved downtown Toronto.
I wanted to let you know that I made a valiant attempt at conventional publishing houses, query letters and the like. After 2 years of beautifully written rejection emails by some of the best agents, I went Indie with my book. It's been a fun ride.
The story is fiction but delves into struggles of coming out with a bigoted father, sexual confusion, nightclubs, substance abuse, all while being humorous and hopeful. The underlying theme is a postcard to Montreal and a love story between a father and son. Comparables would be a gay Secrets of Ya Ya Sisterhood, Fried Green Tomatoes, Piano Man's Daughter and The Prince of Tides.
My sincere appreciation. More than anything, I would like to share positive messages about difficult struggles with the younger generation.
Thank you,
Darren
https://www.darrentomalty.com


Will Morning Ever Come: A novel 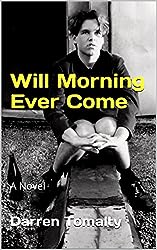 Kyle didn’t see a way out of the antagonism between him and his father, until he learned the truth about him.
When 18-year-old Montreal party boy Kyle Regan resurfaces for his grandmother’s funeral he comes face to face with his angry father, Russell, who shows no sign of tolerating a gay son.
A trio of Dot’s friends are hell-bent on reconciling the gossip by detailing her life, uncovering stories about his father’s childhood that don’t seem to add up.
Kyle’s feels a growing spiritual connection to Grandma that turns his life inside out.
In this postcard to Montreal, Will Morning Ever Come is a moving, often amusing, coming of age story, about the complex bond between father and son.
Will Morning Ever Come is available on Amazon here.