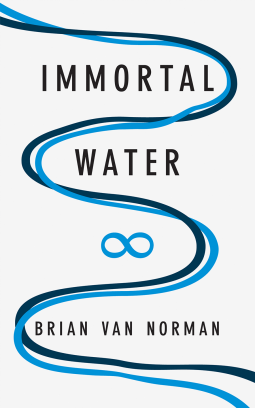 Immortal Water is a striking portrayal of the very human fear of aging. The novel depicts two men from two time periods: the Spanish conquistador Juan Ponce de Leon in the 16th Century and a retired teacher named Ross Porter, in the 21st, both in the midst of mid-life crisis.

In parallel plots the two men become obsessed with a search for the mythical Fountain of Youth. These protagonists sparkle into fullness as they struggle to remain vital while age steals their powers away.

Exiled by Diego Colon (Viceroy of the Spanish Indies) Juan Ponce attempts to recover his youth and regain his powers politically. He follows a mystic native woman, Mayaimi, who tells him she will lead him to a magical water in the land of her birth La Florida. As he voyages toward his destination Juan Ponce keeps a journal, writing about his past, wondering how he has failed.

Ross Porter visits Florida in retirement with his wife, Emily. Ross feels too young to have retired. His wife is dying from an incurable cancer. Ross reflects on his past, fearful of his future alone. When Emily dies he mistakes her last words as a sign. He decides, against all logic, to find the fabled Fountain of Youth disrupting friendships and family with his obsession.

He, too, is led by a woman: a young, free spirited Angela Sayer who wants to become an eco-tourism guide through Florida’s wild, untamed places.

Immortal Water is poetic, intelligent and timely. Its theme reflects the fears of so many middle-aged individuals in our current society where youth is venerated. With an elegant, convincing style Van Norman leads his readers on a magical journey.