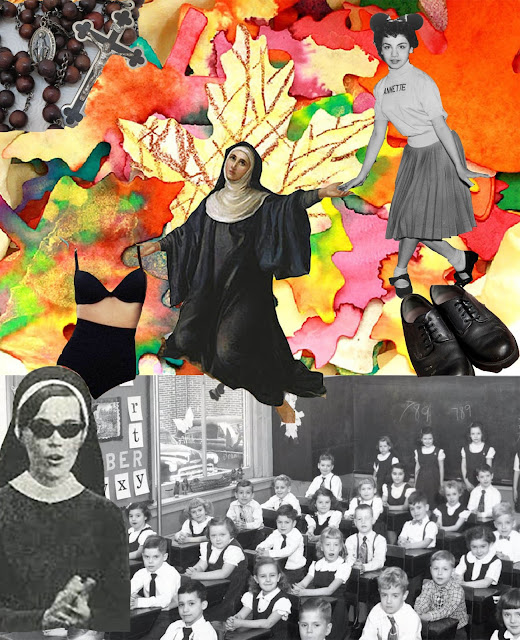 I knew, in grade one, that nuns were named after movie stars.

I had proof: my teacher, Sister Annette, was a nun, in the full regalia with the long black outfit, white starched headpiece forcing her skin back like Marlene Dietrich’s home made facelift tape. She did seem beautiful, sparkling eyes and toothy smile, but very old, it was hard to tell just how old.

The black veil was an extravagant bit of fluff – an elbow length swath of cotton fabric, carefully trained to swing when her head did, like a full skirt, but attached to her head. I could see a bit of the coif she wore under the veil, to keep her hair covered and manageable. Sometimes her dark tresses slipped out….we noticed. 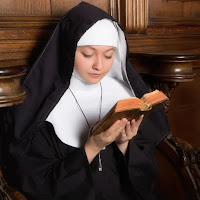 The big white wimple, starting under her chin and extending like a cape adhered to her chest – similar to those you get when you go to Red Lobster – was fabricated from pure starch, bleached daily, and never, ever worn when it was convent spaghetti night. Us girls thought that red gingham was probably the back-up plan for these occasions.

Some of the other, pretty, civilian teachers were full glam, even sometimes with tulle layers to expand the shape away from their form, high heels, nails painted. The full swell seemed to be a fashionable trend, and seeing a woman’s form at school was definitely frowned upon by the sisters. I wondered if all the teachers – nuns and civilians – went to the same store, the nuns directed to the black and white area, where skirts became the full billowing upside down egg cup, covering every bit of flesh, and only ever dirtied by chalk from the blackboard.

The habit, (which is what they wore every day so that’s why they called it that) was complete once the rosary was added – usually as a belt. It clicked and clattered when they walked down the hallway, so you always knew when they were coming. Sometimes, too the nuns wore sandals, but to be practical they usually wore black oxfords, tied up tightly, shoes shiny, worn from many years’ use. I thought that if they indeed were named after movie stars, they might want to step up their shoe game. I mean, had anyone ever seen Lucille Ball wearing oxfords? Sandals were better, but ... winter.

Nuns were nice, at least when you were in grade one. They were always singing or praying or rushing along, swooshing. I remember Sister Louise, the principal at St. Monica’s, where my brothers and I went to school. My oldest brother was too old to be there, my younger sister, too young. So it was just the three of us. Sister Louise always seemed kind of nice to me, except that I heard she had given Dave the strap. I was a little wary of her after that.

My Mother said that Sister Louise had been a Rockette in New York. I imagined seeing her on stage in her habit, legs kicking high enough for the audience to see her panties. I didn’t know what movie star was named Louise, but I was confident that our principal would have chosen wisely, and I probably just didn’t know enough about Hollywood to figure it out. Maybe it was an actress from a gangster movie, explaining her proficiency with a belt.

Mickey Mouse reruns were on TV, and my sister and I were entranced by the performers on our little black and white screen. They were the best singers, dancers and comics I’d ever seen, in my six-year life. They were exuberant, great to look at, fashionable, young and fun.

Annette Funicello stood out like a beacon. Dark curly hair, perky and playful. A wise choice of name for a nun. I began to wonder if nuns wore bikinis under their habits. A bikini and oxfords sounded like a fashion faux pas, so I assumed that in the summer, when a bikini was definitely an option, they would be wearing summer sandals. In the winter, I think they put thick cotton tights over whatever it was that covered their private parts. And always a long black wool coat. Even Rockettes got cold. 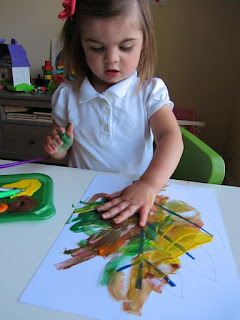 One special morning, my favourite activity doing creative stuff, Sister Annette surely noticed that I went into an art trance when we were asked to decorate a large banner where a gigantic autumn tree was drawn. We were instructed to decorate it with colourful paper leaves. I just kept at it, carefully smearing glue paste all over the back of each individual leaf, adding them to the billowing mushroom treetop and beyond.

As little people, we had a very small area in which to work – we were on the floor, we kneeled and reached as far as we could, and couldn’t see the overall picture. My leaves extended well beyond the black line defining the puffy cloud-like shape. In fact they were all over the place, I had no regard for the full picture, I just wanted to see how many orange or red leaves I could glue and stick.

Sister Annette milled around the area, commenting and helping those who couldn’t figure out how to glue without a volcanic overflow of white Elmer’s staining the parquet tiles.  When she arrived over my shoulder, I heard a small gasp.

“You’ve gone outside the lines!” (This would become a familiar refrain in my life.)

I looked up, and realized that there were rules I hadn’t understood. I thought I may have ruined the wall-sized image, which was to be a fall decoration for our room.

Sister Annette regained her composure then said, “I suppose you have correctly shown leaves falling from the tree. Do you think there was some wind that got them loose from the branches, and they started to fly away?”

Yes, I nodded, feeling mortified but somehow approved at the same time. I’ve always been so sensitive about my art.

Sister Annette was just as fun and nice as Annette Funicello. Her hidden bikini was probably black, to match her habit. She seemed to have a good sense of style, the way her jaunty wimple seemed so perfectly tidy, giving her a cult-like essence of authority.

She could take off her veil and put her head straight into a bathing cap, I could see how practical that was. I wondered if she would come swimming at Eglinton Park with me next summer. She could bring snacks (communion hosts), and I could bring drinks (old wine from my parent’s liquor cabinet). It would be wonderful, but I was too shy to ask. 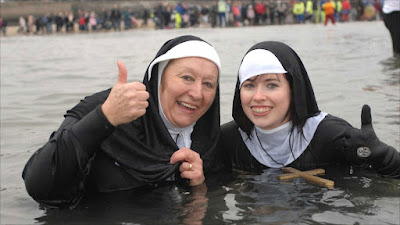 Grade one was very formative, indoctrinating the Catholicism our parents had sent us here to learn. Before summer came, after an eventful year including concerts performed for parents in which I wet my pants onstage, a book club ranking pupils by their ability (I was in “the Jets,” although “the Planets” books looked very enticing), a Valentine’s ring from Kevin Sullivan, lots of visits to church, our first communions and many assemblies where we got to sit in the front row because we were so important, and coincidentally the youngest and smallest students in the school.

We memorized our rote catechism: Q. “Who made us?” A. “God made us.” Q. “Who is God? A. “God is the string bean who made all things.” I think I possibly misheard that last answer, but we all said it that way.

“Goodbye Beverly, I’ll see you in … oh dear I don’t think there is a St. Beverly. Oh well, have a nice life, dear.”

What would Annette Funicello do?

Beverly Dywan is a professional exhibit, experience and strategy designer for museums, with clients throughout North America and in Hong Kong. Bev also enjoys painting, sculpting and writing. She lives part time “up the Bruce,” in Tobermory, Ontario, a beautiful, rugged landscape, on Lake Huron. She teaches Design at OCAD University in Toronto. She has taken several courses with Brian, and highly recommends it!