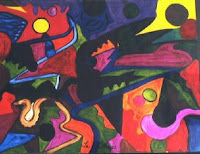 1: archaic: a prolonged discourse
2: a bitter and abusive speech or writing
3: ironic or satirical criticism

“Don't worry about the future. The real troubles in your life are apt to be things that never crossed your worried mind, the kind that blindside you at 4 p.m. on some idle Tuesday." - Unknown

On a sunny spring day thirteen years ago, I made my way to an appointment with my family physician. Over the previous fall and winter I had experienced a minor pain in my wrist accompanied by stiffness of my fingers after typing or using the mouse on the computer for extended periods.

After the standard checks on heart, breathing and blood pressure, my doctor focused on my right wrist and elbow. He twisted and flexed the joints and kept saying, “Relax your arm”. His conclusion: there was a bit of “excess tension” in my arm. I should go to see a neurologist for further tests.

Now seated across an acre of desk from him I heard the verdict: Parkinson’s.

He gave me a prescription for amantadine, a single-sheet folded pamphlet on Parkinson’s disease, and said, “See you in six months”.

The second opinion was the same.

I had just had my 37th birthday. Now I was reading about a progressive, debilitating disease that would be with me the rest of my life. It doesn’t normally strike until your sixties or later the pamphlet said. The pamphlet said I should wear shoes with a flat solid sole and try to get up and outside if only for a little while each day. Right.

Try to get outside if only for a little while each day. Right

I had two children under 10 years old. I had scouts and guides to get kids to. I had to help build Cub cars. I coached my son’s soccer team. I was a Customer Service Account Manager with a staff of 24 people across the country.

Try to get outside if only for a little while each day. Right.

For the next month I was examined, poked, prodded, and drained of blood vial by vial (There were upwards of 30 vials, sized tiny to alarmingly big). Then urine samples, some straight and then some encased in foil to avoid the light, and to crown it all, a CAT scan “with enhancement”. All this was in an effort to determine if my problem might be something other than Parkinson’s.

Since then, the Parkinson’s has progressed. I haven’t. I was a 20 year employee of a large corporation until it

I am an entrepreneur by necessity. That means I’m unemployed. After the boom years of the 90s, my firm underwent several huge downsizings. Now I’m trying to grow a business which digitally restores photos. And using photos, old and new, I create memory movies for celebration, tribute or documenting family histories.

I am still looking for a full-time job.

I haven’t found anyone who will take a chance on me yet.

I am a person with Parkinson’s.

I can’t relax. Even on a good day or good hour I can’t flop down on the couch and sprawl. My head won’t rest on the pillow; I have to will it so.

There are times I need to think about the steps I have to go through to flip a pancake. Shoelaces can stymie me. Tying a Windsor or Four-in-Hand knot in my tie has to be done the night before.

When I need of medication, all the muscles in my body feel as if they’re humming like high tension electrical lines. When the meds take hold it’s like an upwelling of relief from my core to my extremities.

I am never entirely sure that the person behind the counter has understood what I’ve said until the clerk gives me a happy meal that’s wrong, or the clerk asks me to repeat what I just said (which is fine) or until her jaw goes slack and she glazes over into that “waiting for further instructions” posture.

I will haul out a fistful of change to pay for something but let the cashier pick out the required coins.

I have dyskinetic attacks – which uncontrollable head, neck and body movements. Sometimes these scare people. More often they annoy people, especially anyone seated behind me in a movie theatre. The attacks also make my back and neck muscles really sore. It gets worse when I’m nervous.

I sometimes freeze. I lose my balance occasionally, though I haven’t yet fallen. I sometimes shuffle instead of walk. When I can’t walk without shuffling, I get out my hiking staff and use its rhythmic swinging motion to provide a tempo that enables me to walk; or I can run. Running is easy. But I’ve always hated running.

I am not considered disabled by the Ministries of such things, but it’s difficult to get through a job interview without eyebrows being raised, or glances between interviewers which say, “Hello, what have we got here?” I’m a little nervous at interviews. I was once asked if I had been drinking. I said no and tried to explain. My brain was saying, “Tell him you are on drugs and try to explain that.” The interview was too formal; not a time to try humour. But I have to work. I have a mortgage to pay, a kid in college and another in university. The future holds a wedding I’ll pay for and who knows what.

I just turned fifty. Inside I feel eighteen, like any fifty-year-old. I like to joke and have fun but Parkinson’s masks my good humour. I appear stone faced and often speak as though I have a mouthful of marbles. Expression takes effort. Even then, the effort might result in a grimace instead of a smile. A good belly laugh still works.

I take up to 37 pills a day. That’s up from approximately none thirteen years ago. Back then I had to crunch a single aspirin to get it down. Now seven pills in one gulp is the norm.

I make hiking staffs as a hobby. Hand-carved, brass or steel-tipped, with grips of rope or leather cord tied in intricate knotwork.

I have learned Tai Chi.

I play the pennywhistle. My wife thinks the word “play” is somewhat generous. I am going to learn to play the Irish flute anyway.

I still do all I ever could; it’s just a matter of degree and timing. When I feel good I have to do something. Anything. If not, I’ve wasted an opportunity to be “normal.”

I have two beautiful children, a supportive family and a large circle of good friends.

I have an appreciation and newly discovered compassion for those in similar straits.

In the midst of those that don’t know about Parkinson’s, who point or avoid, I have found that some people, as often as not in the places you would least expect, care without knowing you, act on your behalf without being asked, treat you as a dear friend would, and help you continue safely on your way

Parkinson’s notwithstanding and all else in its proper perspective, I’m doing fine.