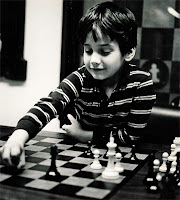 The following is the first chapter of Winning Aurelia, an 80,000-word young adult manuscript about an autistic child who’s a chess prodigy and has a crush on the girl across the street.

“All my games are real.” Bobby Fischer

A long time ago in his living room, Owen Robertson woke up in the middle of a war. Arrows whipped past him through a misty haze. He ducked and scrambled for cover, but there were no trees. Not even a rock or a bush to hide behind. Rain pounded down, and Owen got mad because he hated being wet. He dodged between clashing groups of huge armored men and staggered on numb feet across a cratered field toward a black stone castle looming on the other side. Owen was breathing hard when he reached it. The castle walls were rough and cold, and he knew it was real even before he touched it.

He cringed when thunder blasted like bombs above him. Clamping his hands over his ears didn’t help. He squatted on the ground, rocking, his back against the castle wall. His pajama bottoms were soaked up to his knees and caked with mud.

A skinny man in a long robe slid over to him. Owen blinked a bunch of times but could barely see him through the rain. The man snarled, “Go away” and pointed with a bony finger.

A big man with a beard shouted across the battlefield: “Come here.”

Owen shook his head and didn’t get up.

A tall woman in a black dress glided past him, winked, and said, “This is the real world, Owen. The other one’s the dream.” Owen wondered how she knew his name.

She crossed the battlefield to join the bearded man and the skinny man with the robe.

Exploding through the swirling fog, a man in white armor on a giant horse galloped over. The horse skidded to a stop, and the armored man grumbled down, “Pay attention, boy. Focus.”
The horse shuffled in place under him, stomping craters in the frozen earth with its enormous hooves and making terrible snorting sounds. Owen shivered with his legs tucked against his chest. When the armored man kicked his heels into the horse’s sides and wrenched it around to charge across the field, Owen stood and ran as fast as he could in the opposite direction.

Before he could get out of the castle’s shadow, a line of soldiers in metal vests marched up and blocked his way. They glared at him and stepped forward one at a time, swords raised.
Before he could run again, behind the soldiers, a girl’s face appeared on the horizon. Past the castle and beyond the men and the fog. She was pretty and far away but close somehow. Almost close enough to touch.

Thunder roared in the air, and the girl and the rain and the armies disappeared.

In the living room, Owen’s father and his father’s friend Mr. Nasser leaned over the board. They played chess every Friday night and sometimes let Owen stay up late to watch.

He was in the game.

Since that night in February, he’s grown two feet taller, been beaten up a dozen times, seen four different doctors, five psychologists, played more chess games and woke up in the middle of more wars than he could ever hope to count.

And once, only once, Owen Robertson fell in love.

To learn more about this book or to read Malcolm's blog, visit him at: www.malcolmmatthews.ca
Notes: The photo is of an actual chess prodigy, Josh Waitzkin.
For information about Brian Henry’s upcoming writing workshops and classes see here.
Posted by Brian Henry at 7:27 PM