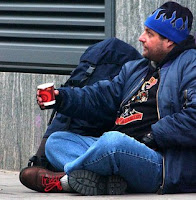 “Street food” is not what you think. Rather, I am talking about food offered to strangers on the street. Today, food was offered to me. That was a first. This is what happened: I was placing my groceries in the trunk of my car in the parking lot of the No Frills at Dixie Value Mall when a car drove up.

Inside were two Rubenesque ladies in their thirties. They were quite pleasant and explained they had been across the road at Burger King, had ordered too much for lunch, and now wanted to give away the remaining untouched Whopper.
Despite a bus stop right there full of people waiting for a city bus, no one would accept their offer. I explained I had already had my lunch but they were undeterred. They seemed so dismayed that no one would accept their offer that I decided to put them out of their misery and say ‘yes’. They would never know what I did with their burger but they could congratulate themselves on having done a good deed.
Believe this or not, I have never eaten a Whopper. I am a Quarter Pounder kind of gal myself. Was this going to be my first Whopper? Not a chance. I am too suspicious by nature to entertain the idea for more than the briefest of seconds.
My plan was to drive along Lakeshore Boulevard and assess pedestrians for need. But not seeing anyone who met my criteria, I went home. My sweetie wouldn’t touch it and if it was not safe enough for us then I wasn’t going to risk my dogs.
The entire episode started me thinking of the food I have offered to the homeless and hungry of the world. Years ago, my sister and I vacationed in San Francisco. We took a doggie bag from Ruth's Chris Steakhouse and were on our way back to the hotel when a homeless person asked us for money for food.
I don’t know your opinion on the subject but, having discussed it with a former nun, I have decided to not give cash but food. I offered him the doggie bag. He was so appreciative! Baked potato and filet mignon, who wouldn’t? On the same vacation, we gave a take home bag of calamari to a man who said he hadn’t had any for years. He, too, was thrilled.
I had thought I was on to something but things were different back in Toronto. The first people who asked me for money were met with offers of whatever food was available. For example, once it was a hotdog from a nearby stand, but he turned down due to dietary concerns. I ask you: would a starving person in a third world country say no to anything in the food category?
My favourite story happened early one Saturday morning in Bloor West Village. I was crossing at the light at Runnymede and coming towards me was a really scruffy looking character. My first impression was he was someone who had had a long love affair with alcoholic beverages. He made me nervous. As we approached each other he said, in the quietest, sweetest, voice: “Please ma’am, I’m awfully hungry. Can I have some money for some food?”
As I mentioned above, I do not give money. I give food. Thinking quickly, I remembered the muffin I had in my purse. I pulled it out and said, “Please, enjoy this muffin.”
In a flash, all his sweetness disappeared. "Fuck off,” he replied.
I could not have been more stunned.
I later read that the homeless of Toronto get more than their fill of donuts and muffins in the shelters. Maybe he was muffined out. But again, I ask you, would the starving people of this world have rejected my offer so vehemently?
In view of my reluctance to accept food from a complete stranger today, I wonder how brave panhndlers must be. But maybe it has nothing to do with bravery when one has a stomach that could not be emptier. May the fates be kind to all in this world who are in need.

Cheryl M. Taylor lives in Mississauga, Ontario with her sweetie and their two Havanese puppies. She attended Brian's "Welcome to Creative Writing Class" in Oakville, had lots of fun, and wrote some pretty good stuff, too. She's previously published stories in The Daylily Journal. This is her first piece for Quick Brown Fox.
For information about upcoming writing workshops and classes see here.
Posted by Brian Henry at 11:31 AM