"The Lily and the Rose," David More 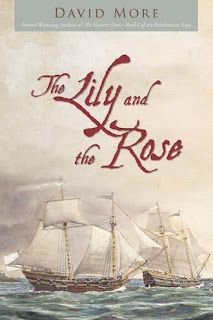 Hi, Brian.
I am very proud to announce the publication of my second historical novel, The Lily and the Rose, (iUniverse, 2009). Set in colonial North America, this is the sequel to The Eastern Door. These are the first two novels in the rags-to-riches saga of the life and loves of Sir William (Billy) Smithyman, transplanted Irish fur trader, reluctant soldier, lawyer and adopted Mohawk. The Lily in the title refers to the French characters and their First Nation allies and the Rose to the English-speaking colonials and their ever-loyal Mohawk friends, led by Billy's wife Laura Silverbirch and her brother Matthew.
It is difficult to obtain reviews for self-published books but I have received several very positive reviews for The Eastern Door and the editor of the Queen's University Alumni Review recently said, "The Lily and the Rose is an engaging yarn, told beautifully. More is a splendid new voice on the Canadian literary scene.” I am pressing on with the third book in the series, Liberty's Children, and plan to have a fourth completed by 2012, the 200th anniversary of the beginning of the War of 1812.
Thanks for your helpful workshops, Brian.
Cheers,
Dave More
The Lily and the Rose and The Eastern Door are available in hard cover, paperback or e-version from iUniverse or http://www.chapters.indigo.com/, or at Novel Idea and Chapters in Kingston, and at Old Fort Niagara and Old Fort Henry bookstores.
And check out Dave's website here: http://www.davidmore.ca/
Note: For information about Brian Henry's upcoming writing workshops and courses see here.
Posted by Brian Henry at 9:27 PM