“Spain in Burlington,” by Jennifer Mook-Sang 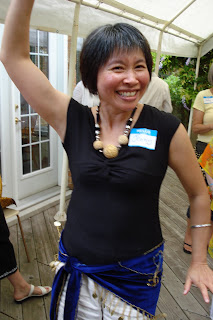 Let me take you on a trip to Spain. Well, at least to our friends, Carla and Glen’s, house where the Gourmet Supper Club is meeting this month. Earlier, there was a series of e-mails arguing the relative merits of Mediterranean versus Polynesian cuisine. In the end, the tie was broken by the wine possibilities of Spain.

Dishes are approved by Carla so everyone doesn’t show up with a big pot of paella. My husband, Jay, is in charge of alcoholic beverages and happily wanders off to the LCBO.

The morning of our supper, I chop onions, garlic and tomatoes. Fillings and garnishes are prepared and I tuck them into the fridge, along with the sangria, ready to be assembled at Carla and Glen’s. I feel faint from hunger, even though I’m quite well-fed from brunch.

Over the years, we’ve developed a drill. Arrive late at the hosts’ house (I don’t know why, but there’s always something we remember we have to do at the last minute), do greetings, apologies and updates. We learn that Melanie and Rob will be late. Rob’s stitches from a recent surgery are acting up and they’re at the doctor’s.

The first order of business is to open and pour the wines. Once we have our drinks in hand, those who need the oven negotiate times and temperatures with our hostess. We jostle for counter space and begin unwrapping. We sneak peeks in each others’ casseroles, steal a taste, and unpack. Magically, tapas cover the kitchen table. A terrine of gourmet sardines, sliced onions and roasted red peppers bathed in olive oil are offered with hunks of crusty bread. Slices of spicy meat, wedges of creamy cheese, and chunks of peppery, tomatoey pork are set off by crisp crackers. Nibbles of dark, soft, wrinkly olives and crisp, cumin-scented almonds sit beside thyme marinated mushrooms and whole smoked oysters.

The fruit-laden, brandy-fortified sangria is poured and we munch on the appetizers and clink glasses. Some of us get bites in between rolling the puff pastry for the chicken pie and grilling the kebabs for the main course. We catch up on mutual friends and what the kids are up to now. The edges taken off our hunger, we move to the dining room. Carla’s best china and crystal sparkle under the chandelier. Dark reds and forest greens on the plates are picked up by the tinted wine glasses and accented by the silver chargers under the bottles of wine.

The first course is brought in as the second course is popped into the oven. We cut into juicy pork tenderloin and alternate tangy lemony bites of meat with cool, sweet salsa. The melon in the salsa is perfectly ripe and juicy, the bits of cucumber crisp, and the hit of red pepper flakes contrasts perfectly with the rich meat.

Frank regales us with tales of his Dale Carnegie course. Our outspoken friend shares his secret for getting through the motivational course without slitting his own wrists. We listen skeptically as Frank explains how he goes with the flow. He explains that as others burst into tears while speaking to the group, he refrains from bursting into laughter by going to his happy place. When he is called on to introduce himself and is asked to repeat his name ten times, well of course he does. Rachael confirms the outrageous exercises to which her poor husband is subjected. We chuckle at his re-enactment of the first day of his class and clean our plates.

We sit back, satisfied. Melanie and Rob arrive straight from the doctor’s. There was no catastrophe but Rob needs ice for the stitches on his inner thigh. Glen makes up a bag of ice and the arrivals sit down to catch up with the conversation and the food. Dishes cleared, we are treated to a fusion of Spain and Morocco. Puff pastry encloses a soft moist filling of chicken, raisins, pine nuts and almonds, spiced with cumin, chili and cinnamon. A dusting of confectioner’s sugar brings up the sweetness of the fruit and the warm spices. Mixed green salad sharpened by soft goats’ cheese and pomegranate seeds complements the pie. They both disappear. As I help Carla take away the plates, I hear Frank reading from his Gold Dale Carnegie pocket book that, “An unearned criticism may be a compliment.” I decide to try this out.

“I don’t like your top,” I say to Carla. She is taken aback. I tell her that Dale says it’s really a compliment. She is absolutely unconvinced. Dishes have to be washed now. Not many families have enough to serve more than three courses in an evening. Rob comes out to help with the dishes and is the cause of great merriment. The icepack in his pants has sprung a leak, and he looks as though he’s taken a leak. Some rude comments are made and Rob wanders back to the dining room saying sheepishly, “I’m sorry, Melanie…” We are highly entertained.

Despite the huge quantities of food and liquor consumed, our appreciation for the fine cooking always allows us to polish off each dish with only mild protests of fullness. And so the seafood, spicy sausage and chicken paella served with orange avocado salad is given a moment of regard, and then devoured.

No-one has ever turned down dessert. And what a dessert. Dense almond cake soaked in rum syrup and smothered in chocolate ganache. Accompanied by Spanish coffee, of course. Heavy glasses prettily embossed with bees are rimmed with lemon, then a thick coat of sugar. A healthy splash of Kahlua topped with strong coffee and a generous dollop of whipped cream. Heaven.

We talk about funny last names and how names get changed with time. Rob tells us about the woman he worked with named Sharon Grocock. "Grow-cock". She got teased a lot about her name and was finally relieved to get married to a fellow named ...Richard Tucock. "Two..."

As the evening winds down, our thoughts turn to our next dinner together. We’ve been to so many countries that there are not many major cuisines we haven’t sampled. Melanie is the keeper of the book, each dinner’s menu carefully recorded along with the comments and exclamations penned in. Either we’re very good cooks or very generous with our praise. I think we’re extraordinary cooks.

We consult the book to see which country needs to be revisited. As it goes round the table, comments are scratched in beside outstanding dishes. I am pleased. My sangria has been voted “best sangria I ever tasted.” Wait a minute, has the critic has ever tasted sangria before? Carla has a turn at the book and exclaims, “Rob, what a funny comment.”

Rob is bemused. “I didn’t write anything. I haven’t had the book yet.”

“Well, it has your name beside it.”

“I think you’d better read it yourself.”

Rob takes the book and reads out loud, “The food was so great, I wet myself.”

Good thing I’ve been to the bathroom or I would have wet myself. Glen eventually confesses to the forgery. Oh the hilarity.

Someone looks at their watch. It’s almost midnight. We agree on Vietnam for next time. We clatter and clash with our dishes and pans out into the night. Goodbye, see you next time. Thanks for having us. I’m already looking forward to the next one.

Update, Aug 2016: Since writing this short piece, Jennifer has gone on to write a wildly successful middle grade novel published by Scholastic and has a picture book scheduled for publication with Kids Can Press in 2017. Read about the accolades Jennifer is receiving here. Also, Jennifer will be a guest speaker at the Writing Kids Lit weekly course starting Sept 27, 2016, in Burlington (see here).

When Jennifer Mook-Sang finds a spare moment to spend in her little writing nook, invariably her thoughts turn from the blank page to the beckoning fridge. This is not a surprise since her writing nook is in a corner of the kitchen. Someday she will have a proper desk in a proper study wherein to create wonders of modern language. In the meantime, her desire to write stories to make you laugh and cry does battle with her desire to sit in front of the Food Channel and stuff her face with gourmet cheeses and homemade bread. Writing and cooking. Well, sometimes you can combine the two. Jennifer wrote “Spain in Burlington” as a tribute to her friends in the Gourmet Supper Club. On September 16, she read it aloud at CJ’s Café in Oakville.