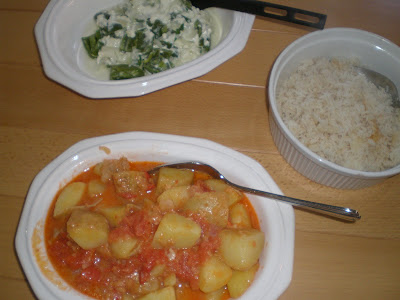 Jennifer Bushman is one of the most talented emerging writers I know. You can check out a chapter from her novel in progress, The Ming Bowl, here.
Over the course of a year, Jennifer's attempting to cook a recipe from every country in the world, and she's writing about it on her blog, Eat planet. Discover the world.
She doesn't just give the recipe, she also writes about the country the recipe's from, so her blog becomes part memoir, part travelogue and part fabulous recipe book.
Recently, I've especially loved her posting about Bhutan, where they eat seriously spicy food and "embrace the concept of gross national happiness as opposed to gross national product." But my favorite recent posting is on Benin, Voodoo and Lagos ...
When I was five we moved to Lagos, Nigeria. I loved living there, but my mother was relieved when we finally left two years later. We had to deal with coups, power shortages, American hatred, and bouts of hepatitis. There was always the fear we’d stumble across a dead body lying around. They were common on Ikorudu Road near the airport where there was lots of heavy traffic; people would get hit by cars and left lying in the street. Bodies were also seen floating in the harbor washed up along the beach. And then there was always the chance you’d have a juju put on your house ... more
Photo: Kewa Datshi and Ema Dashi, two dishes from Bhutan
Note: For information about Brian Henry's upcoming writing workshops and creative writing courses, see here.
Posted by Brian Henry at 5:52 PM