"My Father’s Gun," by Rita Bailey 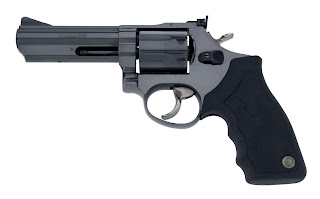 My father’s gun sat on top of the TV in our living room. It was the first thing you saw when you walked in: the television, big and boxy with four legs and a flat top, a 60’s model, and the gun sitting on top, small and black in a brown leather holster, a Smith and Wesson model.

I can almost see your eyebrows going up at the image of a gun on a TV, with the family gathered round watching Hockey Night in Canada and the Ed Sullivan Show. It jars with our media-shaped idea of normal life, at least as it was back in the days of Beaver Cleaver. Guns didn’t belong on TV’s in suburban living rooms. Guns were found in sheds or barns or clapboard farmhouses with wooden screen doors or in the back of mud-splattered pickup trucks.

But we didn’t have a wooden screen door or a pickup or even a shed. We had a red-brick house in the suburbs, and my father was a cop. He hated guns and often joked that he couldn’t hit the broad side of a barn, not that there were any barns in downtown Toronto where he worked.

If it makes you feel any better, before putting it on the TV, he always took the bullets out of his gun and locked them in his old leather briefcase at the back of the hall closet, which we knew was permanently out of bounds.

Ours was a busy, crowded house, crammed with eight kids, my parents, and an aunt – eleven people in all. Things could easily go missing in a house like that, overflowing as it was with laundry baskets, school books, board games and winter boots. But the gun, and the gun alone, had pride of place on the TV. When you think about it, it makes perfect sense. The television was the hub of our existence, so my parents would immediately know if someone touched it. My mother was a regular air-traffic controller, with a built-in radar for our movements at all times. And, since the gun was out in the open, there was none of the allure of the forbidden fruit. It was just there, part of the furniture. In truth, we didn’t even notice it.

My father was a grade 11 drop-out. His education was the kind you got just by surviving the depression in an inner-city neighbourhood, and by serving in the Second World War. He preferred street psychology to the use of force, and employed various bluffs with the skill of a card shark. “Stop or I’ll shoot,” was one of his favourites, reserved for use on those days when he had left his gun on top of the TV. Another ruse, pulled out when he was too out of breath to chase someone, was, “There’s no use running, I know who you are and where you live.” What amazed him, he once told me, was that most of the time his techniques worked, and saved a lot of wear and tear on his body.

He told another story about a suspect who was resisting arrest. Knowing he couldn’t overpower the man, my father, who had an ample girth, simply fell on him, and had the man cuffed before he could catch his breath.

Looking back, I realize that these stories were probably exaggerated, told by my father to reassure and entertain his children, so we wouldn’t worry about him. But whenever I hear about Robert Dziekanski, the Polish man tazered to death at the Vancouver Airport by the RCMP, I think about my father.

Times have changed. So has crime, according to the media, and so, for better or worse, has policing. I’m sure officers are longer allowed to take weapons home and leave them on top of the TV. Vancouver in the 21st century is not Toronto in the 1960’s. Drugs, gangs, guns, and the threat of terrorists have raised the stakes to new levels. We all seem to be living in a culture of fear, afraid to talk to a stranger, isolating ourselves behind locked doors and security cameras.

But the video of Robert Dziekanski’s death plays in a continuous loop in my mind. The officers who tazered him were probably better trained and educated than my father, and had the latest technology at their disposal. But they don’t seem to have had any people skills. Maybe they needed less training in weapons and more in human psychology. Maybe they just needed to play more card games.

Somehow I think my father, with his beer belly, and his lousy aim would have handled it differently. Maybe he would have tried talking to the man, offering him a meal or even a beer. If all else failed, he could have fallen on him. But he wouldn’t have used the Tazer. Most likely he wouldn’t even have had it with him. He would have left it at home, in the living room, sitting on the TV.


Rita Bailey lives, writes and gardens in downtown Hamilton. When not writing, she volunteers with various environmental and social justice organizations.