"My First Canadian Winter" by Tammy the cat, with keyboarding by Barbara Fairhead

"Bloody hell," thought Tammy as she jumped through the cat door and landed slap bang in solid cold wet white. She was so taken aback that she almost forgot why she was jumping through the cat door in the first place. So this was snow! She shuddered. She was beginning to miss her house in England, warm and cosy with lots of scrumptious wildlife in the garden. Somehow, a bunch of squirrels and the Rottweiler next door weren’t quite the same.

As she shook the snow off her paws, a traumatised Tammy decided it was time for affirmative action. Using the last vestiges of her digestive resources, she re-entered the house and peed all over a nice new pair of snow boots. This resulted in a lot of swearing and the purchase of a beautiful canopied litter box. Very satisfying. No more visits to the great outdoors – that’s for sure.

Tammy, an American shorthair with just a touch of Maine Coon, had come to Canada about three months ago. She knew it was three months because Neil and Barbara just got their OHIP cards and could now go and see a vet.

Honestly. What was the big deal? Tammy had never had an OHIP card and she saw the vet all the time. AND she wasn‘t that excited about it. When the kids came home for Christmas, one of them was very ill and had to go to the hospital. No card and LOTS of excitement. Go figure.

Tammy had come accompanied by Indigo, a magnificent Siamese, Chyna the dog, and the servants, Neil and Barbara. Quite understandably, Tammy was Barbara’s vision of cat beauty – a big stripy feline who spills over her knees. Beautiful, intelligent, a great hunter in her day (although nothing like the legendary Rocky, who dragged a duck through the cat flap, and if she never heard that story again, she would be very happy), she could now devote her life to sleeping. Sigh. Her favourite. 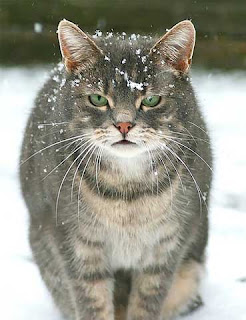 Sometimes, though, the nightmares would come. All those injections, being stuck in a box and put on a plane. Bad enough. But then it took Barbara and Neil HOURS to get them out of cargo handling at the airport – a girl can only hold it for so long, and then life gets very wet and smelly. Then three weeks house arrest with two idiot Labradors. The horror!

Tammy also liked sitting on the computer (honing her keyboard skills) – the new laptop was very comfortable – and beating up the dog. She also developed literary interests, which for a time were satisfied by chewing holes in whatever newspaper Neil and Barbara were reading. Now, however, she needed to create. What a good job she’d sent Barbara to that writing class.

All a bit academic since Barbara had the computer.

Now that trips outside were no longer mandatory, Tammy could also devote herself to watching Chyna and Indie launch themselves into the garden, trying to decide which paw will go on the ground and how quickly they can lift it up.

Indie’s face when he hit his first snow pile was quite the picture. Indie didn’t say much but Tammy was sure that whatever he said started with an F...

Indie doesn’t like the back yard and keeps trying to escape through the front door. Weeks and weeks and weeks of snow, and he still hasn’t figured out that there is just as much snow outside the front door as there is at the back. Chyna isn’t too bright either. She now wears a red jacket and BOOTS when she goes for a walk. Although, to be fair, Tammy thought, that was probably Barbara’s idea.

Minus 4 and wind chill factor of minus 14, the weatherman said. That probably meant it was cold. And there was Indie throwing himself at the front door yet again. As for Neil and Barbara, they were going out! As Tammy always said, ‘No fur, no brain.’

Back to bed with Chyna. Not such a bad old sort after all. Chyna was a bit grizzled and had a bad heart but was perfectly trained. Occasionally, Tammy has heard Neil and Barbara talk about getting a new dog when Chyna died.

“Over my dead body,” thought Tammy. It had taken 14 years of hissing and gentle love taps for Chyna to learn her place. The thought of training another dog was just too exhausting…. 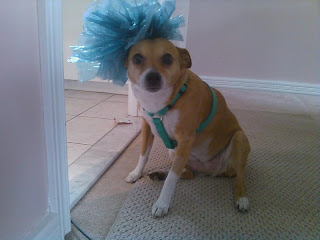 Barbara Fairhead and her husband moved to Canada two years ago. They got to sit in the sardine section upstairs while their pets, Tammy, Indie and Chyna had to slum it in their individually designed, fully upholstered, turned-around-three-times Skykennels. Great Royal Family fans, the Fairheads celebrated the Royal wedding with royal blue trifle and fascinators. The enclosed photo is of Chyna wearing her fascinator. Barbara's was not quite so successful.