I had been putting off going to the animal shelter. There didn’t seem to be any particular reason why I had put it off, other than cutting the grass, weeding the flowerbeds, dog sitting, house cleaning and provoking Roger. I did the latter just because it was fun.

I arrived at the shelter mid-morning and unloaded all of the paraphernalia I had to donate. Melody, the shelter supervisor and I chatted for a while. She seemed more grateful for the donations than usual.

“We've been rushed off our feet for the past week,” Melody explained. “We were notified of a hoarding situation and brought in twelve cats and thirteen dogs. That put our shelter fifty percent over capacity. “

“Geez, where did you put them all?”

“We had no trouble with the cats. We’ve got lots of space in the Cat Room. But, as you can see at the end of the hall some of the dogs are in crates because we simply have no room.”

“How can I help? I asked, trying to be heard over the constant barking.

“Can you walk a couple of the dogs for me? That would be a huge help.”

“Sure I can, just point me in the right direction.”

The first dog I took was a Labradoodle. Her shelter name was Misty. They had had to shave this girl down almost to the skin but she was spunky. She pulled me along as if I was a little red wagon.

Then I took two dogs together that looked like they may have been from the same litter. I think they were some kind of wiener dog mix. Wiener face, long body and legs. Maybe they were wiener dogs that had been crossed with a Great Dane.

Finally, Melody led me to the biggest crate at the end of the hall. She opened the crate and staring up at me was a huge dog with a sad teary look.  She put the leash on him and reluctantly he came out of the cage. He had just one ear and lord love a duck, he only had three legs!

“We call him The Duke”, said Melody softly as she stoked where his ear should have been. “He’s actually been here for seven months. Next week we're shipping him to another shelter in the hopes that someone will give him a home. He’s only about two years old but we think someone may have deliberately put him in a dogfight. Just a wild guess, but I’m thinking that he lost the fight.

As we strolled along, I scolded the dog. “You know exactly what you’re doing don’t you?”

There was no response

“You know darn well I won’t let them ship you away when you have already been in a shelter for seven months. By the way, where’s your other ear? Maybe I can make one out of paper mache and stick it on.  And, about the leg?  For heaven sake, the shelter should only charge me half price because you’re missing half your parts!”

There was no response.

I peered underneath the dog. “Yep”, I said, “Those parts are missing as well.”

Hop-along-Duke and I headed back to the shelter. Before I took him back inside, I bent down, and gave him a big hug. I could feel tears coming.

While holding his sweet face in my hands I whispered, “Puppy, can you hang in for a few more days? I’ll be back.” His eye was weepy as he looked at me. He was so gentle!

We stepped back into the shelter and there was Melody with an ear-to-ear grin.

“Cover those teeth, woman,” I said. “You play dirty, don’t you? You knew this puppy would make me melt. I bet those other dogs didn’t even need to be walked. It's all part of your ruse. Am I right?”

All I could see were her teeth again.

“I can’t take him with me right now – I'll have to make a few preparations. Besides, I just donated all my extra dog stuff to you. But I'll be back in a day, so don’t let anyone else adopt him.”

Melody looked at the The Duke and shook her head. “Aggie, there’s not much chance of that.” 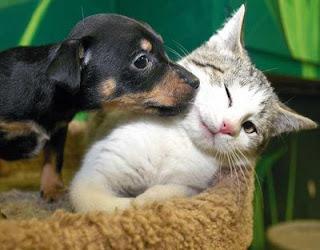 I left the shelter cursing Melody but smiling at the thought of The Duke having a good home with us. I opened my purse and took out a small bag of M & M’s. Life is good.

Rogers’s truck was in the driveway when I got home.  He was in the  powder room replacing floor tiles. He was on his knees with his butt in the air. And while it galls me to admit it, it was indeed a very nice butt.

Then I had this sudden urge to give him a nudge and knock him over. Lord, where did that demonous thought come from? Instead, I got real close to him and  yelled, “ROGERRRRRR!”

He jumped and yelled back, “Shit Aggie, are you nuts? Now I have to re-do this tile."

“Oops, sorry Rog. I wasn’t sure you could hear me.” My grin was stuck on my face like glue. “  need some advice. Normally I wouldn’t ask you but given you are the only one here can you take a minute?”

“Well Aggie, that’s quite a vote of confidence. What is it?”

“I was at the dog shelter a few hours ago. They were over-crowded and needed help so I walked some dogs. The last dog that I walked was a gentle soul, even though they think he been made to fight at some point. One of his eyes was a bit wonky and he had a little nub where I assume an ear had once been. But even worse, the poor little guy has only three legs.”

Roger stared at me for a few seconds. “Well, you’re either going to arrange a posse and go after whoever did this to the dog, or you’re going to bring him home. Or, knowing you, perhaps both.”

I felt myself getting teary eyed and said softly, “Roger, I am going to bring him home. Tomorrow, I think, but I'll have to give Squiggly Nuts and Archie Doodle extra treats tonight and butter them up.

My arm fell into a large old coffee can where I had stashed some chocolate fudge. Knowing that fudge and pinot noir are a good combination I poured two glasses of wine.
I offered one to Roger.

He stared in disbelief. “Agnes Balls, are you being nice to me?”

Just drink the damn wine and stay away from the fudge! 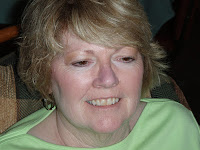 Joan Noble retired in 2011 after 35 years in the financial industry. During her career, she wrote mainly case studies, policies, and procedures. She is now fulfilling a lifelong dream of writing fiction. The working title of her novel is Paws at Fifty and is loosely based on her own life experiences  and that of her two dogs Archie and Humphrey.