“The Affairs of Pearl Peacock” by Phyllis Humby

“People look at me oddly when they hear I’ve been married four times,” Pearl Peacock said. “It’s not my fault that three husbands died and a fourth ran off with someone’s wife. Then, of course, there were the others.”
Hearing this, Lydia Corvits, a resident of Golden Manor, raised a shambolic brow, her rheumy eyes widening.
“No reason to be alarmed,” Pearl went on. “It all happened over the course of sixty-five years.”
Mrs. Corvits peered over her shoulder toward the rec room TV. The opening bar of her favourite soap opera had sounded, and she had been about to excuse herself when Pearl, the Manor’s newest resident, began speaking of her lost loves.
“My first husband, Alfred, was quite a bit older. Heavens, I was a young girl of eighteen and Alfred was thirty-nine when we married in...” Pearl paused as if brushing aside a veil of cobwebs “… it would have been ’43. Mother and Father had passed on and Alfred had been a friend of the family my whole life. I was grateful when he offered to marry me.
“He was a plain looking man. Tall and thin. Long face and prominent, arching nose. Not much imagination if you know what I mean, but what did I know then? He left before dawn each morning to walk to the dairy where he’d hitch up old Ben to the wagon.” Pearl arched a well-shaped brow. “Ben knew every stop – never missed.”
Mrs. Corvits blinked and gave a slight nod.
“We lived in a small apartment above a house in the east end of town. I always kept busy at scrubbing the floors, polishing the linoleum countertop, and wiping out the icebox. I mended clothes and walked to the market every second day to shop for food.
“Samuel was born the following year. He was long and skinny − like his father. He even had his father’s nose. Alfred would stand in front of the cradle and stare for the longest time. I never knew if he was admiring the baby or wondering how he had allowed the complication of a young family.
“One morning, baby Samuel woke me for a feeding and Alfred was still in the bed beside me.”
Pearl cast a sideways look at Mrs. Corvits. “Yes, heart attack. And that was the end of husband number one.

“It wasn’t until 1948 when I met and married Bert. Young Samuel was approaching school age and I’d managed to keep us fed and clothed all that time.”
Mrs. Corvits wondered how Pearl had accomplished that but feared interrupting the saga.
“Bert worked as a clerk at the bank, the only bank in town. He was quiet but not as solemn as Alfred. He enjoyed taking Samuel for Saturday morning visits to the park. He was kind to me and attentive. We lived in a row house in a respectable part of town. And like Alfred, Bert walked to work. We were both pleased when George was born a couple of years later. Bert came home most days to eat lunch and spend some time with baby George. After the supper hour he devoted his time to Samuel.”
Pearl smoothed the flared skirt of her floral print dress. “One day his lunch sat untouched. The baby fussed while I watched out the window for a glimpse of Bert strolling toward the house. Instead, a stranger knocked on the door. Bert had an unfortunate accident while walking home. A new driver lost control of his car and it bounced up over the sidewalk pinning Bert beneath a wheel. That was husband number two.”
With a backward glance, Lydia Corvits noticed her television program was now over. 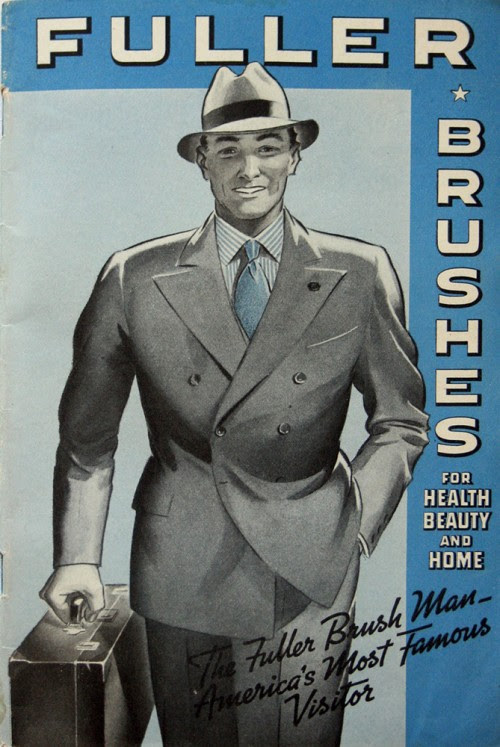 “It was a good ten years before Wayne knocked on my door.” Pearl laughed. “He literally knocked on my door. I bought more Fuller Brushes that year than I could possibly use. We dated for a few months before we married. Now, Wayne was the first husband who was fun. He laughed and enjoyed life. He didn’t make much money. What little he did make he spent on flowers, cheap wine, and entertaining friends. He had more friends than anyone I knew.
“He didn’t really care about the children. Oh, he was good to them, but I don’t think they were all that important to him. Nevertheless, we had a child of our own three years after we were married. After the new baby was born, Wayne didn’t invite his friends around for drinks or food. He partied away from home after that. One night the police came to the door. They’d found a body along the river. My husband. That mystery was never solved.” Pearl Peacock took a sharp breath. “That was husband number three.”
Mrs. Corvits’s attention was now riveted on this woman with the Revlon Red lips. Anxious to hear about husband number four, the tiny thin-haired lady leaned forward in her chair, her tongue darting between her lips. Mrs. Peacock’s story was every bit as good as the soaps she’d watched for – well, forever. 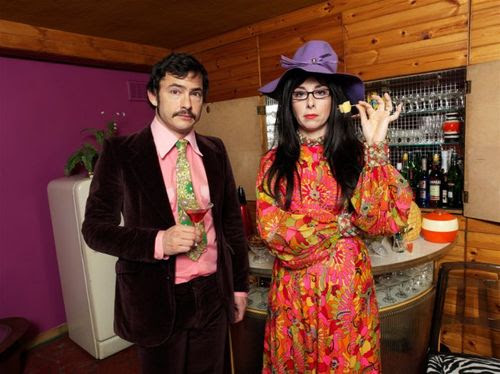 “It wasn’t until the seventies that I met Eric at a party. Oh my, it was a wild party. I don’t mind admitting that, Mrs. Corvits. After all, it was a long time ago. Eric and I had nothing in common really. He was extremely good looking. Actually,” Pearl’s voice lowered to a conspiratorial whisper, “he never knew my real age, and I wasn’t about to tell him.”
Mrs. Corvits nodded as though in agreement, or maybe it was just a get-on-with-it nod.
“Wayne might have been fun, but Eric lifted my social life to a new level. Eric and I attended many parties, most of which I have only a foggy recollection. However, I will never forget the first time I found him under a pile of coats at one of the parties. Unfortunately, he was not alone.” She lifted her shoulders in a c’est la vie shrug. “We had two glorious years together and then another two not so glorious before he ran off with the wife of our Little Theatre director.
“I was mortified. Totally shocked. Why couldn’t he have died like the others?” Pearl closed her eyes and gave a heavy sigh before continuing. “And so, that was husband number four.

“I decided never to marry again. But ...” she paused as if trying to remember what could have changed her mind “… by the mid-eighties, I was getting restless. I was approaching middle age when a new man came into my life. Thank goodness my television went on the blink. He sure knew his way around TVs.”
Pearl chuckled. A nudge from Mrs. Corvits encouraged her to get on with the story.
“Ed was married. He admitted he was married. He was around my age. He thought I was hot stuff. We began an affair. The time we spent together was more intriguing, more fun, than anything I had ever experienced. I was living alone by then, and Ed would sneak over whenever he could.” Pearl giggled and shook her head before leaning into Mrs. Corvits. “Sometimes we went to a motel in another town,” she arched a brow before adding, “in the middle of the day.”
Mrs. Corvits’s mouth dropped. Just like that, it sagged open. Another soap opera was beginning on television but the elderly woman doubted it would be as enthralling as Mrs. Peacock’s X-rated love story. She nodded her head encouragingly for Pearl to continue.
“Well, we knew it couldn’t last forever. He just got so busy with all his grandchildren, and since the oldest one was driving, he worried that we might be seen. Still, it was lovely while it lasted.” A barely audible sigh escaped.
Thinking she had heard the end of Pearl’s romantic adventures, Mrs. Corvits sat back in her chair. 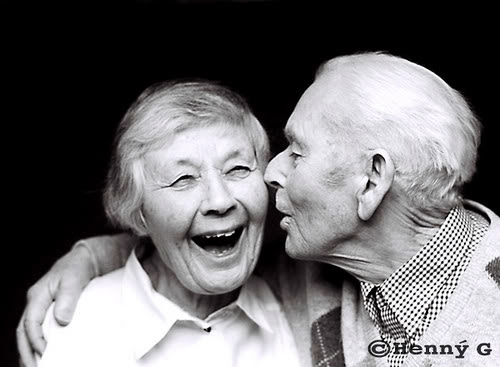 “Of course” Pearl continued, “Just because I was in my seventies didn’t mean the end of romance. It was three years after Ed and I parted that my landlord came to the apartment to check on faulty taps.” Her smile lit up her face. “Oh my, Mrs. Corvits, he was something else. Virile...”
Thinking their conversation was leading to graphic intimate disclosure, Mrs. Corvits paled considerably.
“… and charismatic. I heard talk that he was friendly with a few of the old girls in the seniors building. I didn’t care about that. I looked forward to his visit every day. Yes, Mrs. Corvits, we were together for over ten years before the complex replaced him with a younger seventy-four year old. Stanley stopped by occasionally for coffee with me but it was just never the same.”
Pearl’s story ended with a whimper as she looked around the communal recreation area.
Just then, a fellow resident approached the ladies. “Lydia, may I say hello to your friend?” Without waiting for a response from Mrs. Corvits, he turned to Pearl Peacock and gave a bow. “I don’t believe we’ve met. You must be the new kid on the block.” He gave her a wink and a cocky grin.
Pearl grinned back. Without taking her eyes off the handsome octogenarian, she tilted her head toward Lydia Corvits and cooed, “Would you please excuse us, dear?” 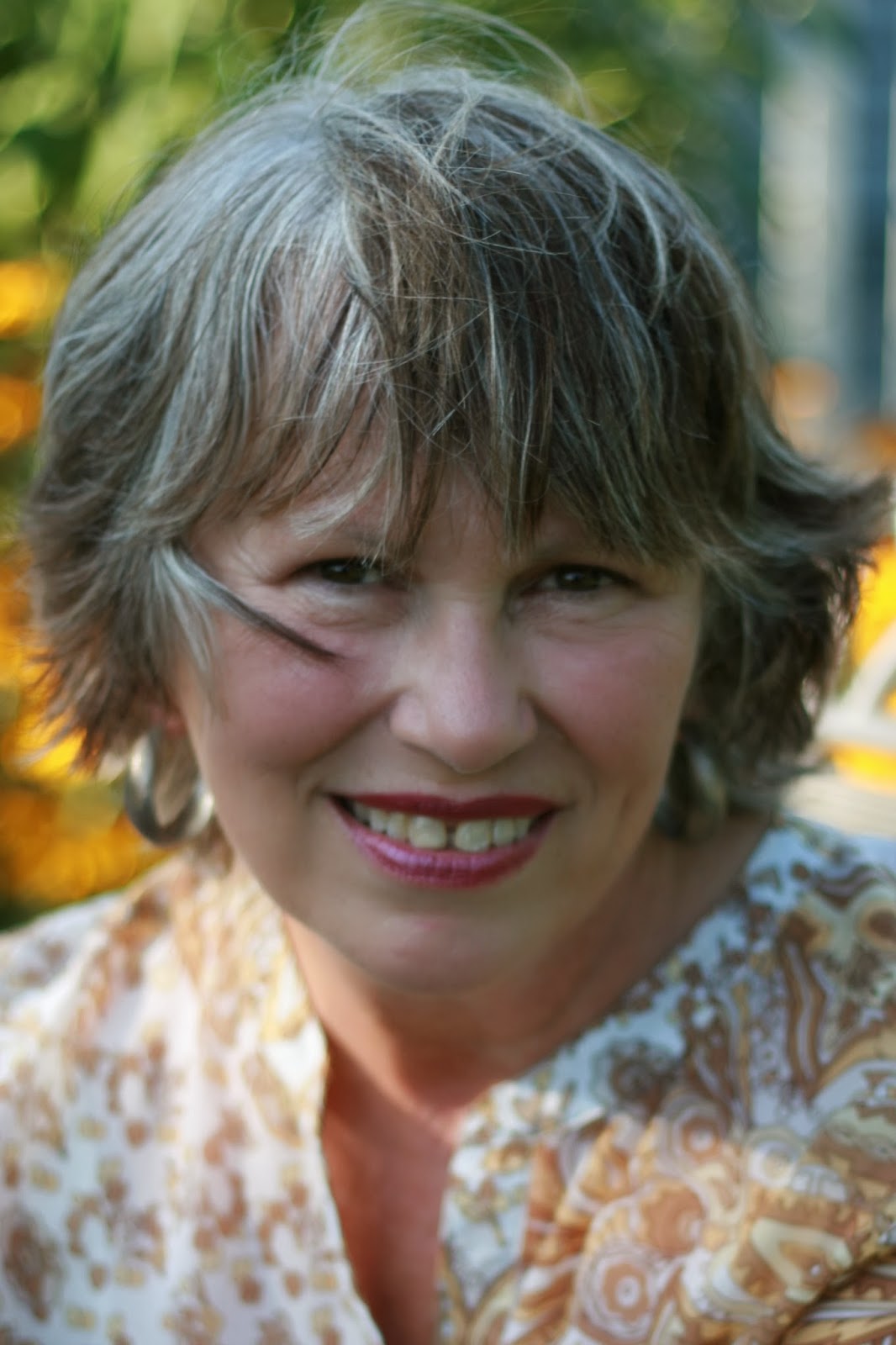 Phyllis Humby lives in rural Camlachie, Ontario, where she indulges in her passion for writing suspense/thriller novels. Her work has appeared in journals and anthologies in Canada, the US, and the UK. The most recent anthologies featuring her work are Commuterlit Best Selections 2013, and A River Runs By It.

She appeared as a Fringe reader in Eden Mills Writers’ Festival 2013. In addition, she writes a humorous monthly opinion column, Up Close and Personal, for First Monday magazine. She blogs here and is on Facebook here.