In Tibetan Buddhism understanding, our world contains six realms. One of these they call “the God Realm.” Here the Gods live in total contentment, all needs satisfied, with little required of them. At their death they suddenly grow aware of all they are losing, of what they may have accomplished had they understood more clearly the impermanent nature of this dimension.

Didion lived a life of great ease, graduating Berkley, winning an essay contest that landed her upon graduation a job with Vogue magazine, married into an artistic and wealthy family, traveled  and enjoyed friendship with the gods of Hollywood, fulfilled her career as a world renowned writer, partnered on several movie projects including The Life and Times of Judge Roy Bean starring Paul Newman, and was the recipient of many awards including  Doctor of Letters from both Harvard and Yale, and the National Medal of Arts and Humanities presented by President Barack Obama.

In Blue Nights, she writes of her talent in the past “...how comfortable I used to be when I wrote, how easily I did it, how little thought I gave to what I was saying until I had already said it.” She then compares this place of ease and comfort, an activity spilling from her like breath, reaping rewards and awards in every direction, with her present status “...what it was I was doing...no longer comes easily to me.”

This insight about what had been the most intimate activity of her life, writing, and how time pulled this from her, winds around other insights resulting in questions raked through a heart that has been plundered of persona, leaving only the raw human behind.

About being a mother she recalls with characteristic bluntness that a friend of hers had to suggest she get a bassinette. She states, “I had not considered the need for a layette.” What woman, contemplating motherhood, remains unconscious to such a basic need? What kind of mother rises from such oblivion?

Didion takes it further, digging more into the possibility every parent hates to have to, but does consider, “Was I the problem? Was I always the problem?”

The book, studded with such remorseless questions, manages a profound tenderness if only in the echo of such honesty. 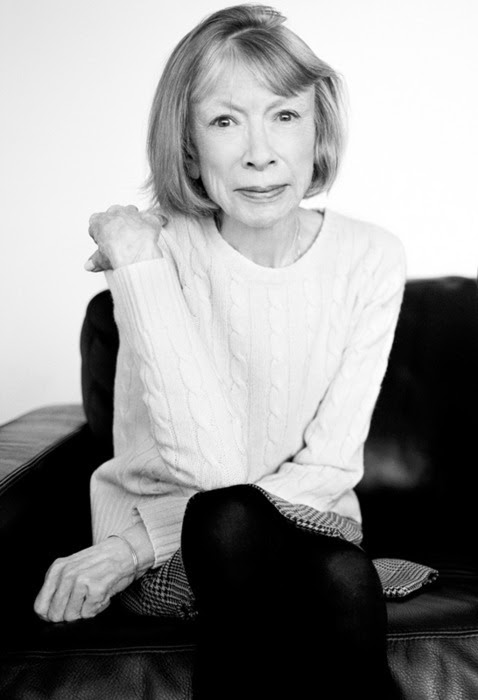 Conscious of the unravelling of her life force, as she writes from the middle of her seventies Didion carefully unwraps tragedy, the sudden death of her husband John at their dinner table, as a subtext, and focuses on sorrow, her own ongoing and present grief over the early death of her only child, Quintana Roo, of pancreatitis, arguably attributable to alcoholism.

Nowhere does Didion completely explain Quintana’s early death, although this is the motivation behind and central theme of Blue Nights. Instead, Didion exposes her own process, her profoundly honest questions about herself as a mother, and in this shares her path of grief.

Tibetan Buddhists suggest that some of us live as Gods, and certainly, up to a certain point, Didion lived in that realm. However, as her touching observation of toasts at Quintana’s wedding, “We still counted happiness and health and love and luck and beautiful children as “...ordinary blessings,” shows, she grew to understand loss, and learned to regret perhaps more powerfully than most of us. Certainly her description of these life companions – regret, remorse and loss – rings more powerfully than what most may muster.

Blue Nights is a masterpiece, acclaimed by many. More importantly it offers glimpses into the humanity we all share and reminds us both that memories are illusions and that everything becomes memory. But as the great Tibetan Buddhist teacher of Illusion, Marpa, exclaimed upon hearing the news of the death of his son: “Some illusions are greater than others.”

Didion provides this insight, even as she approaches the end of the illusion of Joan Didion.

Charlene Jones’ poetry has most recently appeared on Commuterlit. She also writes for her radio program Off the Top with Whistle Radio, 102.7 fm, aired every second Tuesday from 3:00 to 3:30 p.m. (Note: Whistle Radio and CommuterLit have recently teamed up to run a monthly contest. Details here.) You can see Charlene perform her poetry and prose at Linda Stitt's inimitable monthly salon at Portobello Restaurant and Bar the first Saturday every month in Toronto.Charlene blogs at www.Charlenediane.com. Her first novel, The Stain, will be released this fall.