“Rest in peace, my beloved PC,” a true story by Lori Edey

Note: My email has been misbehaving lately, making it difficult to get out my newsletter. You can always click on the "Workshop & Course Schedule" button above to see what's happening. And add your email in the "Follow Brian by Email" button off to the right under my bio to be sure you don't miss any postings. Happy holiday!  – Brian

“It’s just like Christmas morning!” declared the geeky guy in the Apple Store as he began to unpack the MacBook Air I’d just purchased.

My lip was quivering and tears began to roll down my cheeks.  “No it isn’t,” I spat at him.  “It’s good Friday. Crucifixion day!”

I was quite resistant to move from my old PC to the Almighty Mac, despite the sense it made to do so.  No more anti-virus software, no more guilt about forgetting to backup files (Macs do it automatically onto a cloud), and no more fuss trying to trade files with my daughter Cathy (she fell into the arms of Mac long ago). Plus of course, Macs have the reputation of being better for creative pursuits, and I’m always intending to engage in more creative pursuits.

Luckily for the geeky sales guy and me, we weren’t alone.  Dear calm Cathy, who could clearly understand both the Christmas morning and Good Friday perspectives on this purchase, became the instant bridge.  She grabbed the attention of the horrified salesperson, trying to give me enough privacy to gather my polite self enough to rejoin consumer heaven.

With a bit of uncertainty, the sales geek turned his full attention to Cathy, his back to me, and proceeded to rave about the wonderful features of the MacBook Air, woefully unaware that Cathy has already owned one for a couple of years.

My tears subsided, but my decorum had some distance to travel.  Cathy turned to me, asking the young man to pause for a moment.  “Do you want to wait on a bench in the mall?”

Grateful, I left her my credit card and jumped at the chance.  “Call me when I have to sign,” I chirped and abruptly left the store.

I’ve always struggled with computers.  When I was a teacher, my classroom was the recipient of the first computer in the school.  The father of one of my students died quite suddenly.  Instead of a tombstone, the student’s mother decided to use the money to buy computers for her two children’s classrooms.  Mine was one of them.

If that’s not pressure to learn how to use it, I don’t know what is.  The children did better than I did learning how to use it – foreshadowing the future.

Years later when I had my own PC, I took several courses, trying to learn how to use it, but dropped out of most of them in frustration. Finally, a good friend decided he would teach me for a bottle of single malt scotch.

My education began by him moving the gigantic machine into my dining room.
“For the first week, just talk to it at least once a day.  If you can do it more than once a day, it will speed up the learning process,” he explained.  “Don’t touch it.  Just talk to it.”

And so I did.  Within a month, he had me emailing friends near and far.    He did know how I learn!  Nothing could motivate me more than this magical means of keeping in touch with my friends and family. My learning grew from there.  He earned his bottle of scotch.

Now, I my computer is an object with great personal significance to me.  It connects me with friends and family on a regular basis.  It holds memories through my many photographs of people and places – photographs not only filed by event and chronology, but also arranged so that they appear randomly as a screen saver.  Every day I take a few moments to gaze at these photos and my heart fills with gratitude at the rich and abundant life I’ve been privileged to lead.

But my relationship with the MacBook Air was hard won.

The funniest part of all?  My first degree is in math and computer science! 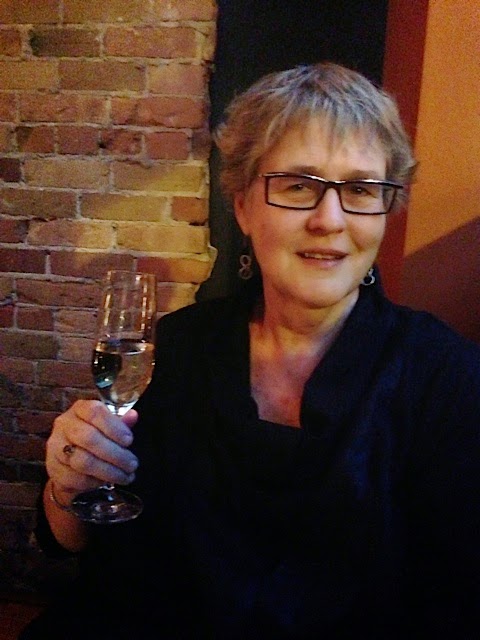 Lori Edey has worn a variety of hats:  cook, teacher, minister, counsellor/therapist among them.  The last several years, she’s been playing “dress up” with that of writer, trying not to take herself or her writing too seriously.  A convert to cats, she lives a “pussy-whipped” existence with her partner and beloved felines in Dundas.