A new novel by Joyce Wayne: Last Night of the World 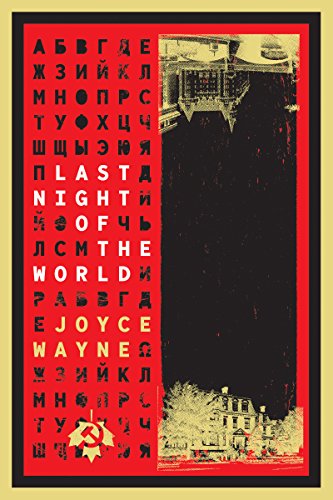 Hi, Brian.
Who is Freda Linton? Find out in the first Canadian novel about a female Cold War spy.
Everyone’s invited to…
“An Evening with Joyce Wayne,” presented by the Oakville Public Library to celebrate the publication of my new novel Last Night of the World, published by Mosaic Press.
Thursday, April 19
7:00 – 8:30 p.m.
Central Branch, Auditorium
Cost: $15. Age: 16Y+
Tickets available at all branches starting March 22. Details here.
And
My Book Launch, with wine and cheese hosted by Mosaic Press and the Winchevsky Centre
585 Cranbrooke Ave., Toronto (Near Bathurst and Lawrence. Map here)
Wednesday May 2
6:30 to 8:30 p.m.
All the best,
Joyce Wayne

About Last Night of the World
On a hot Ottawa night in August 1945, Soviet agent Freda Linton’s world is about to fall apart. She’s spent the war infiltrating the highest levels of the Canadian government as an undercover operative for the fledgling Canadian Communist Party and for Moscow’s military police. When Freda discovers that top-secret files exposing her involvement may be turned over to the RCMP, she is faced with an impossible decision and must determine who is on her side. Should she risk everything to smuggle out nuclear secrets that will kick off the Cold War?

If you miss the evening with Joyce at the Oakville Library and her book launch, you can still get a copy of Last Night of the World.  Its release date is April 19, and you can pre-order it from Amazon here.