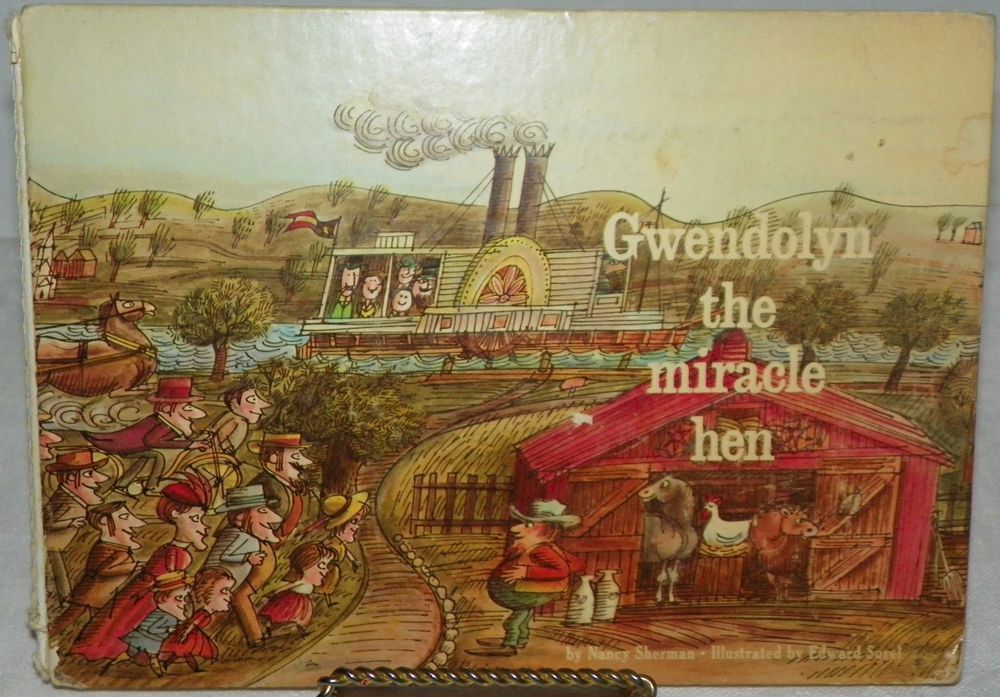 My favourite book is easy to spot in my collection: like many picture books, it’s wider than it is tall, so it sticks out from the shelf, spine ragged and the hardcover yellowed. You can also pick it out by the familiar old-book aroma – it is 55+, like its owner, but I’m not quite as musty.
Gwendolyn the Miracle Hen by Nancy Sherman is the one book I’ll never part with. To this day when it comes up in conversation, my parents recite in unison, “Out in the country, far from town, there lived a man named Farmer Brown. Between the fences he had built, his pastures made a patchwork quilt.…”

When Farmer Brown has trouble paying the rent to Mr. Meany (who bears an uncanny resemblance to Dudley Do-Right’s nemesis, top-hatted Snidely Whiplash), our heroine Gwendolyn figures out a way to raise some cash. She lays amazing eggs with “colored lines and floral designs” for Farmer Brown to sell.
(My favourite featured a white background with yellow-orange and blue flowers within flowers with curlicued leaves on wavy baselines).
When Mr. Meany takes Gwendolyn instead of the rent money, she outwits him and returns to happy anonymity with Farmer Brown.  The clever hen goes back to laying white eggs, “but now and then, when rent time nears, a multicolored egg appears.”
This book had a triple impact on me. First, the good versus evil story with an inventive solution made me strive to be a creative problem solver. Second, the rhymes, so fluid and musical, sparked my interest in poetry. But best of all, the illustrations by Edward Sorel spoke to me. They were swirly and doodly in that 60’s graphic style and the characters so expressive. Yet amid the colour and movement, the backgrounds were evocative and moody. 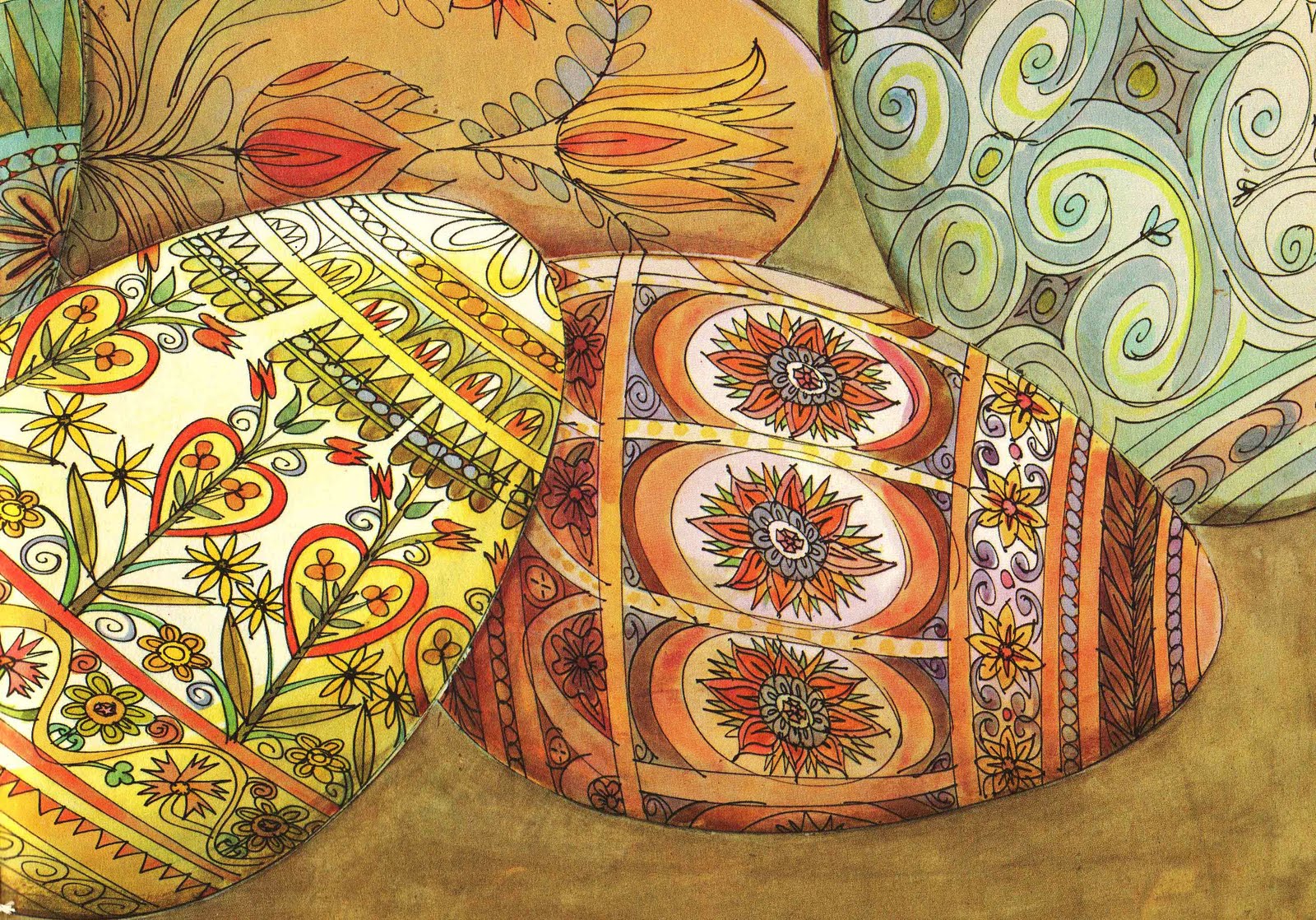 Having grown up in suburban southern Ontario, it wasn’t until I met my Edmontonian future husband that I was introduced to what I assume was the inspiration for the eggs – pysanky, decorative Ukrainian Easter eggs. My mother-in-law showed me the beautiful symbols of rebirth and gave me a kit to make my own. Mine looked exactly like Gwendolyn’s – if she had laid them after a wild night eating fermented corn.
If I remove my rose-coloured glasses and consider the book more critically, perhaps it wasn’t so unreasonable for Mr. Meany to expect the rent. And would Gwendolyn really be able to go back to her peaceful farm life after being famous? Perhaps today’s children might find the story and illustrations dated: it seems like all the classic characters from Winnie the Pooh to Arthur have been updated. A 2010 review on Goodreads indicated that the children of at least one Gwendolyn afficionado were still enjoying the book, and several people mentioned it had also been their childhood favourite.
Curious about what had happened to Nancy Sherman and Edward Sorel after this 1961 publication, I was delighted to discover the duo made another book together in 1963, Gwendolyn and the Weathercock. Nancy Sherman wrote a few more children’s books, but I could find no biographical information.
Edward Sorel, on the other hand, now 90, continues to enjoy a storied career as a writer known for social commentary as well as an illustrator and cartoonist. His contributions include the top American magazines, from Harpers, Forbes, Vanity Fair, Penthouse, the Atlantic, National Lampoon to the New Yorker (with over 44 covers).
He wrote and illustrated his 2016 book (for adults), Mary Astor's Purple Diary: The Great American Sex Scandal of 1936, based on old newspapers he had found as a young man under the linoleum during a renovation.
While Gwendolyn the Miracle Hen may be hiding in obscurity, perhaps there’s a chance Edward Sorel’s fame may one day result in a reprint. Then a new generation can discover how a plucky hen did something extraordinary to save the people and animals she cared about, and that what really matters is a simple happy life with family.
***

Lisa Sutcliffe can be found in and around Oakville, Ontario enjoying her many retirement pursuits including writing, woodworking, guitar, drinking fermented beverages and perhaps a renewed attempt at making pysanky.

Labels: All literary, Book reviews, Essays about reading and writing