“The Magic Bowl” by Paula MacDonald 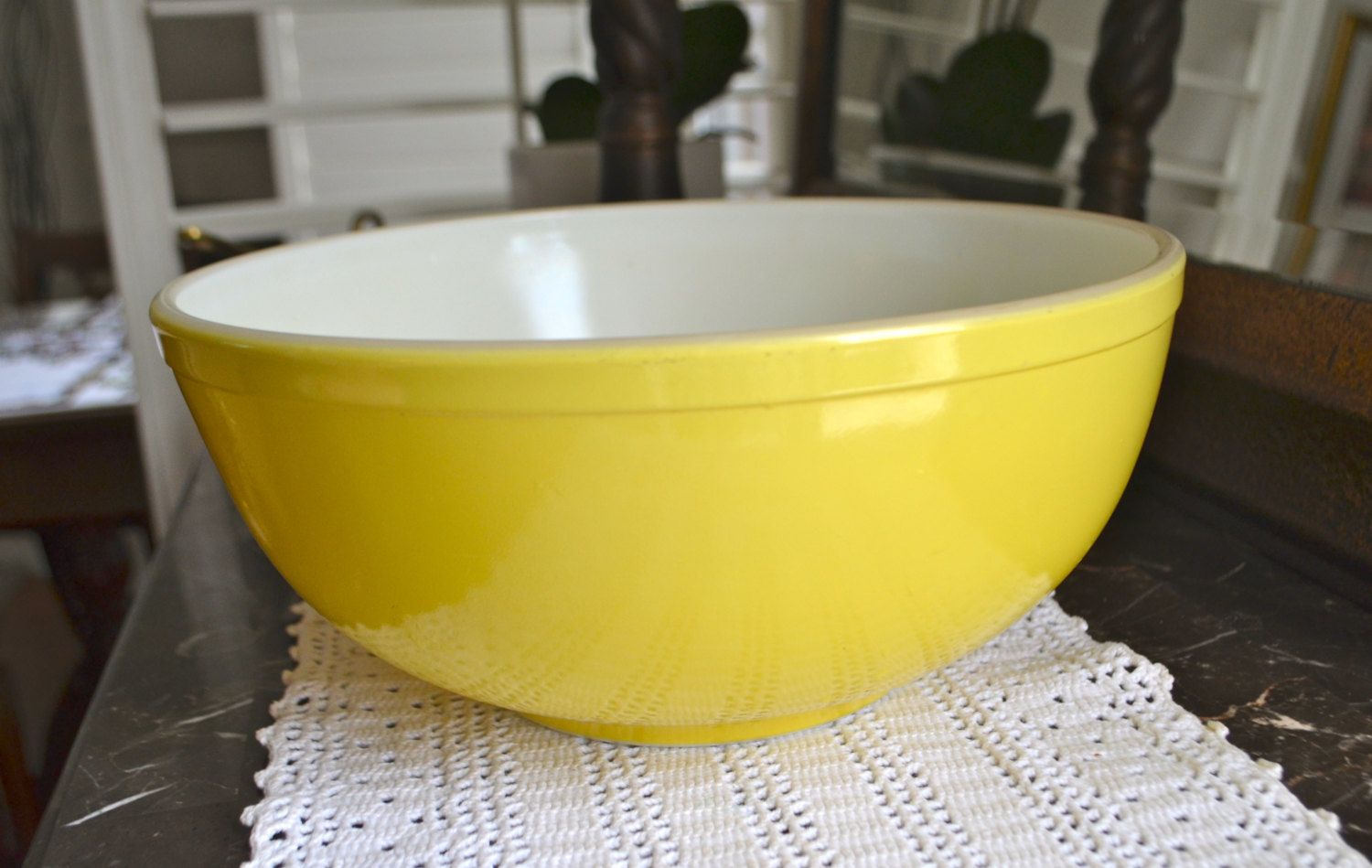 “Here, you take it. You and the girls will get more use out of it than me,” my sister said as she thrust the big yellow mixing bowl in my direction. My hands automatically reached out to grab hold.
Her gesture was unexpected, as the draft-lottery method my three sisters and I had used to choose the items we would take from our parents’ home was as fair as we could make it. And, I had thought, final.
But there she was, giving me the old kitchen bowl that all four of us had cherished. What magic had this bowl worked on my sister that she would give up such a treasure?
At first glance, it appears to be an ordinary mixing bowl, the kind you would find in your mom’s or grandma’s kitchen. It is both old and old-fashioned. I can’t remember a time when we didn’t have this bowl, nor can my sisters. If my mom got it at the beginning of her marriage, the bowl would be sixty-five years old now. It’s Pyrex. Bright yellow, with a white, opaque interior. For the longest time, it was the largest mixing bowl I’d ever seen. And despite its age, it’s pristine. No scratches mar the yellow surface, no chips break up the smoothness of the rim.
Sixty-five years old and perfect, despite some rough use. While it’s true it has never seen the inside of a dishwasher, four children and three grandchildren have learned to bake using this bowl. Like most children, we weren’t always careful. The bowl has been packed up and moved from house to house too many times to count, as my parents moved frequently over the years. No special care or handling is responsible for its excellent condition. It’s more magic.
However, the real magic of the bowl was the way it elevated our baking skills. My three sisters and I, along with our offspring, all inherited the mediocre-chef gene from our mother. Our mom never met a piece of meat she couldn’t overcook or a salad she couldn’t jelly. To be fair, growing up on the prairies during the depression, when food quality was not as controlled as it is now and recalls of unsafe food were non-existent, meant my mom’s strategy of overcooking was often the safest way to go. And as she continued to cook in the 1960s and 1970s, with the time’s overreliance on adding condensed soup or prepared salad dressing to dishes, she couldn’t help but produce some unappetizing meals. 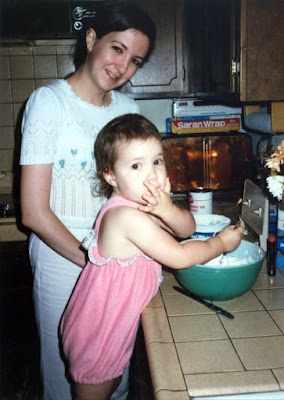 But, through the magic of the big yellow bowl, my mom was a fantastic baker. With all modesty I can say the rest of us are, too. Tangy lemon parfaits, gooey chocolate brownies, melt-in-your-mouth whipped shortbread, chewy ginger cookies. We baked often, with great results. Superior baking prowess seemed to be forged in the glass of the bowl, seeping out every time a cup of butter was placed within. I can still hear my mom’s voice echoing with every turn of the spatula: “Measure precisely, my dear. Baking is as much a science as an art.”
Or: “You’ll know when you have whipped enough. The batter will change colour.”
And: “Taste and correct.”
When I began to teach my daughters to bake, I copied my mom’s methods.  Instructing them on the basics, and explaining where and why one might have to diverge from a recipe. Over time my girls learned it all, and our conversations while baking changed. Some parents say they have the best conversations with their children in the car. Uninterrupted time and not having to look directly at each other can lead to all sorts of revelations. But for us, it was the kitchen and the baking process that opened the floodgates.
Some of the conversations were heart wrenching. Like the time my youngest was in Grade 9 and a mean girl targeted her. The first I heard of it was while we were baking chocolate chip cookies.
“Mom, she accused me of taking her idea. But it was my idea!” This incident would snowball and the school administration would become involved. It would change the dynamics of the girls in the grade, most of whom had been part of a cohesive group since elementary school. And it would change my daughter forever, resulting in a loss of her child-like innocence but also freeing her from the group-think mentality of high school, and allowing her to go her own way and find her path.
At other times, my girls would wait until we were baking to tell me of great news, like my older daughter’s first scholarship offer from a top ten U.S law school. Or my younger girl’s artwork being chosen for the school show.
Sometimes, we would have more general conversations about their hopes for the future, how a good relationship works, or the perfect place to live.
One day one of my daughters will take this bowl for her own kitchen. Her sister will visit, and they will make the blondies, birthday cakes, and Christmas cookies that we all baked together when they were growing up. The same treats my sisters and I baked with our mom when were young. They’ll talk, about their childhood, about me, and about their grandma. They’ll teach their own children how to bake, passing along the memories as well as the recipes. And their children will open up to them, as they did to me.
On second thought, this is the real magic of the big yellow bowl.
***
Paula MacDonald is determined to find the time to follow her passion of writing. Former careers include financial analyst (not recommended) and local public library worker (five stars). She lives in Oakville in what was an entirely adequate house that literally became too small overnight when her oldest child moved back home, mid-pandemic. She dreams of the day the ‘home office’ will return to its former glory as a dining room, and excess clothing, shoes, and bins will no longer line the upstairs hallway.