“Eating gelato for Israel – a buy-cott tour of Toronto” by Brian Henry, photos by Leah Henry 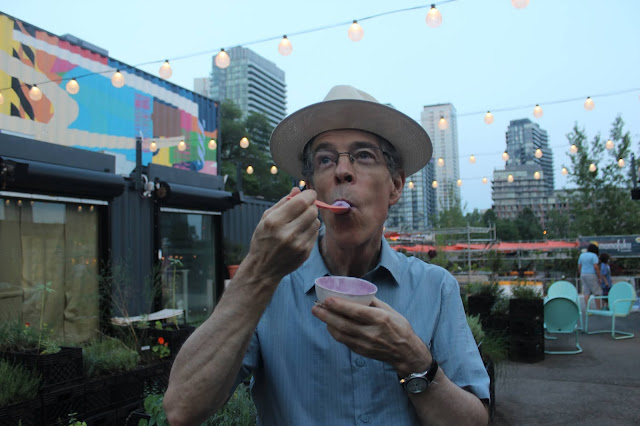 It’s a sweet job and we should all be doing it. With my daughter/photographer, Leah, I’ve undertaken to do a buy-cott tour of Toronto. We’re hitting spots targeted by the “we hate Israel” crowd, which means having to eat fabulous food.

Solato is our first stop. It’s an Israeli gelato company with a pop-up store in the trendy stackt market at Bathurst and Front streets in downtown Toronto. Solato’s opening was greeted by an online slander campaign, with one-star ratings on Google and nasty comments such as: “Great if you want a side of apartheid.”

The slander campaign made the local news and Torontonians came down to show support. “We had line-ups out the door for hours,” says manager Neil Stewart.

“People are still doing negative reviews,” he adds. “The funniest was ‘The manager is so rude.’”

The manager,” meaning Neil, a guy who could be in the running for the friendliest, most personable guy in Toronto.

And the gelato? Leah went for the dark chocolate with a slices of chocolate hazelnut fudge as a topping. “Delicious,” she announced.

Next up: Aroma Espresso Bar, an Israeli chain with numerous locations in the Toronto area. It serves a variety of salads, sandwiches, and pastries, plus a parade of different coffees. Our local Aroma at Bathurst and Wilson caters to an Orthodox crowd so the cafe is strictly dairy. Other locations carry chicken & avocado and turkey sandwiches.

Behind the counter, Rosie and her younger sister, Shira, are all smiles. Shira will be returning to grade 12 come September. Her older sister Rosie works at Aroma full-time. Her eventual goal is to be a police officer.

If the boycotters were to have their way, they’d both lose their jobs. Leah and I do our bit to make sure that never happens. We split a Mediterranean sandwich (roasted eggplant and hardboiled egg topped with tomato, pickle and tahini), a blueberry peach crumble, and a potato bureka. Their cheese bureka is our favourite, but we’re not its only fans, so they’re sold out. Plus, of course I get coffee. 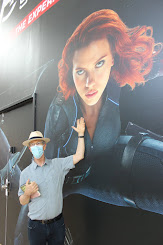 We cross the street to John & Danielle’s No Frills to pick up Sabra hummus. We’re tempted by Roasted Pine Nuts hummus, but go for the Classic because it comes in a larger size.

The Bay at Yorkdale Mall is our next stop. You probably know from history class that the Hudson Bay Company is Canadian, not Israeli. But the boycotters hate the Bay for carrying Israeli products, especially SodaStream and Ahava cosmetics. Even worse, from the boycotters’ perspective, the Bay has vowed to never bow to political pressure to stop stocking Israeli goods.

In Yorkdale, I stop to get my photo taken with Scarlett Johansson (actually with a big photo of her as Black Widow). Johansson took flack for appearing in an add for SodaStream and stepped down as the ambassador for the British charity Oxfam, which is a boycott supporter.

We also stop at ECCO, not for any Israeli connection but because they had a great sale on a pair of sandals Leah’s had her eye on. But we do eventually get to the Bay.

SodaStream sells a machine for making soda pop at home. The bottles of syrup tend toward the exotic: kombucha, cherry pomegranate, orange dandelion. But there’s also root beer and even cola.

A friend with a SodaStream at home confesses to using Kool-Aid drops or other “flavoured water enhancers.” Her kids love fizzy fruit drinks and most especially creating their own mixtures. They’re floating on bottles of carbonated punch. 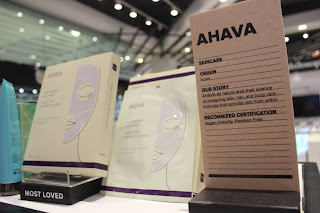 We don’t buy a SodaStream; an infinite supply of pop at home strikes me as dangerous to my waist line.

We head for Cosmetics to check out Ahava skin care products. For myself, I don’t go in for much skin care. But Leah’s delighted to have a purifying mud face mask, with Dead Sea minerals and mud. I suggest we need a photo of her wearing it. “No, that’s okay,” she says.

The following day we hit Café Landwer for lunch. Landwer Coffee was started in Berlin in 1919 by Moshe Landwer. In 1933 when the Nazis came to power, the family moved its business to Tel Aviv where it opened the country’s first coffee roaster company and a café. In the 1980s the Federman family acquired the business and in 2004 started Café Landwer – which quickly became a popular chain of restaurants.

Chen, the manager of the Café Landwer on Avenue Road in Toronto, tells me the first Landwer in Toronto opened in 2014 in the Israeli neighbourhood at Bathurst and Rutherford, just north of the city. The Avenue Road Landwer opened in February 2020. “Just in time for Covid,” Chen says.

The restaurant has brunch and dinner menus, both gravitating toward a Mediterranean vibe. So you can get your standard two eggs for breakfast, but they come with sides such as a chopped cucumber and tomato salad, hummus, avocado, and labneh Greek yogurt, with your choice of white or whole grain bread or pita. 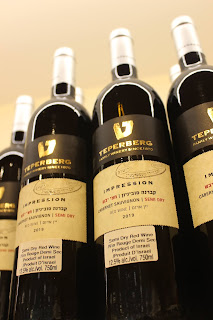 Landwer’s is licensed and is a comfortable place to come just for a glass of wine or a cocktail, whether indoors or out on the patio. Plus, Landwer’s still roasts its own coffee from its own beans, and Chen claims, “Makes the best coffee in Toronto.”

I’m no expert, but my cappuccino was wonderfully smooth.

For lunch we went for grilled sandwiches on flat bread: a Jerusalem sandwich (mozzarella, hardboiled egg, matbucha and za’atar) and a Feta and Kalamata olives sandwich (with mozzarella and za’atar-spiced onions), both served with a pesto mayo dip.

I could get used to this.

Our final stop is the liquor store, as Israeli wines have long been a target of the boycotters. Our local branch on Wilson and Dufferin has a broad selection of Israeli wines.

I’m tempted by a Cabernet sauvignon made by Teperberg, as this family winery has been operating in Israel for 150 years. It opened in Jerusalem in 1870 and is now headquartered by Tsor’a in the Judean hills.

But it’s a hot August day, so my eye strays to the whites. I see Tel Qasser from Notofa made with Roussanne grapes, but at $82 a bottle, decide to leave it for a special occasion and instead go for a Yardren Chardonnay from Golan Heights Winery. Always a safe bet. 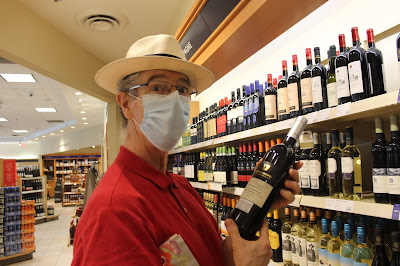 We could expand our buy-cott tour. The boycotters don’t like Puma running shoes – apparently, they dislike the Israeli soccer team Puma sponsors. They also dislike Pillsbury – I guess because the Dough Boy is too cute, and Hewlett Packard – probably because the boycotters haven’t caught on that virtually all computers and smart phones are stuffed with Israeli tech.

Strangely, they’re not boycotting Pfizer’s Covid-19 vaccine, even though Israel and Pfizer are cooperating closely to measure the vaccine’s effectiveness. But then the boycott movement is most notable for its hypocrisy. Omar Barghouti who founded the movement obtained both his degrees from universities in “apartheid” Israel.

Labels: All literary, essays by Brian