"In Hollywood," by William Henry, age 7, and his dad 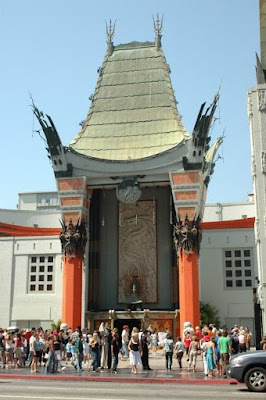 Here’s the truth: Dads do all the best stuff with you. Last time we went on vacation, Dad took me and my plush toy Movie to see Spiderman 3. Ha! My sister Alice had to go the National Gallery with Mom.

Spiderman 3 is super cool and ultraviolent. Plus it turns out Peter Parker can dance! You can’t see Spiderman 3 at the movie theatres anymore, but you should get it on DVD – only not from the library. DVDs from the library always get stuck just as Spiderman knocks Harry Osbourne off his goblin flyer.

Only – so sad I was crying! - we forgot Movie at the theatre! My old babysitter Rachelle had to get him when she was in Ottawa and give him back to me at her wedding, which was pretty cool. Turns out Rachelle can dance, too.

This year when we went to Hollywood on vacation, Alice had to go to Universal Studios, where they have rides so scary, they can kill you! But Dad took me and Movie to see Harry Potter and the Half-Blood Prince. Ha!

It was showing at Grauman’s Chinese Theatre, which Dad says is the most famous movie theatre in the world, built back in the olden days when movies mattered. Outside Grauman’s, movie stars have signed their names and put their footprints in the cement – which I thought you weren’t supposed to do.

Dad looked for Danny Kay’s signature because he was Mom’s great uncle or something. I looked for Spiderman’s signature. Only we didn’t find either.

Out on the sidewalk, more famous people have stars in the cement, but just their names printed, not their real signatures. Lots of people were crowded around Michael Jackson’s star and it had all flowers and teddy bears and stuff piled up beside it.

Everyone was taking turns crouching beside Michael Jackson’s star and taking pictures of each other. Did I want my picture taken with Michael Jackson? Dad asked.

I loved the inside of Grauman’s Theatre. At the concession stand – always my favourite place in a theatre – they had Sour Drops and Icees (which are like Slushies, except American), plus popcorn of course. Dad bought us $100 of junk food. That’s why it’s more fun to go with Dad than Mom.

Where you watch the movies is huge, like a church for dinosaurs. I could have zoomed my radio-controlled plane all over that place and hardly crashed into anything. Plus, ‘cause almost no one else was there, we got to sit in the back row that’s usually just for people who can’t walk.

But then they started showing the ads. Yow! It was so loud it hurt my ears, and we had to run out to the lobby before I got permanent damage.

The usher promised me it would be quieter when the movie started.

Well it was, and here’s how the movie goes: The evil wizards make black clouds come down from the sky and they twist up a bridge that all these people are walking across. The people start screaming because they’re going to die, and Spiderman doesn’t come to save them. I don’t know what happened next, because that’s when I screamed and we left. 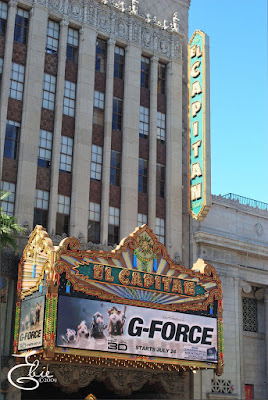 We got our money back and went across the street to El Capitan Theatre, where they were showing G-Force. Dad says El Capitan is another famous theatre from the olden days before even Grandma was born.
Only too bad, we didn’t get to go to the concession stand because Dad convinced the manager to let us bring in our snacks from Grauman’s.

G-Force is the best movie ever. Plus it’s in 3-D! It’s ultraviolent and super funny. Juarez – she’s a guinea pig and a superspy? – she tells this little girl: “You put a bow on me, you going to lose a finger.”

At home, I say to Alice: “You bug me, you going to lose a finger. You mess with my plush toys, you lose two.” Then I laugh and laugh!

Oh, but disaster! We forgot Movie again, and we flew all the way back to Toronto without him!

And here’s the truth – my Los Angeles cousins drove up to Hollywood and rescued Movie, and they’re going to Fed-Ex him home tomorrow.

Note: Photos enlarge when clicked.
William Henry is in grade 2.  His dad, Brian Henry, teaches creative writing.
Posted by Brian Henry at 7:17 AM