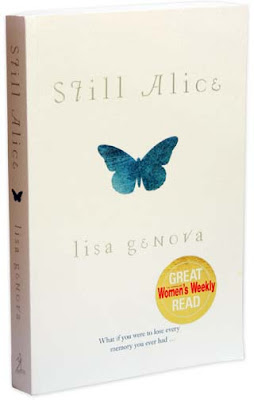 Pocket Books, New York, January 2009
I read this book with some trepidation since several of my friends in the over sixty age group warned me that they had avoided it because of their fears about Alzheimer’s disease. However, once I started to read it I was hooked by the courage with which the protagonist, Alice Howland, faces her destiny. Alice is a Harvard professor who at age fifty begins to experience forgetfulness and disorientation, which leads to her diagnosis.

Alice shares her initial fears and the techniques she uses, with the support of her family, to maintain as normal a life as possible. She is even able to introduce some humour about her situation, such as the time she searches the entire house in vain for her Blackberry. In frustration, she finally gives up. Weeks later when taking out a package of frozen food for dinner she finds her Blackberry in the freezer.

The shift in her relationships with her husband and three adult children as the disease progresses clearly shows how different people cope differently with the tragedy. The detailed attention to how Alice copes day to day, and the author’s depiction of the emotional impact that losing her abilities but not herself has on Alice make this a book that I strongly recommend.

Karen Gansel has lived her life committed to achievement, tolerance, harmony and collaboration with others who have similar values. That’s reflected in her novels and short stories about the experience of constant change in people’s lives. Having been writing since 2004, she's completed drafts of two manuscripts and numerous short stories. She has improved her skills through two creative writing courses and membership in three different writers groups. Currently she is the Coordinator for the Fiction Writers Group for the Canadian Authors Association, Niagara Branch. She has previously published in The Globe and Mail and a few community newspapers.
Note: For information about Brian Henry's writing workshops and creative writing classes, see here.
Posted by Brian Henry at 9:37 AM