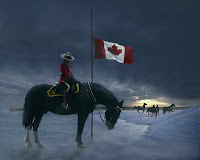 In a burst of activity, Melanie Mills – long known to be a scam literary agent – has promoted a nonexistent writers’ conference in South Carolina, which she then cancelled without sending anyone their promised refunds on memberships they’d bought; faked her own death while masquerading as her own assistant and possibly as her own daughter as well; shut down her operation in North Myrtle Beach SC, and decamped to Canada.
Operating under the name “Elizabeth von Hullessem,” she fraudulently promoted and sold memberships in a nonexistent literary conference in Banff (trading on the reputation of the prestigious Banff-Calgary Wordfest), plus an equally nonexistent charity concert in Banff to benefit autism; and vanished from Banff with tens of thousands of dollars in convention fees.
The happy ending to this story is that she has now been tracked down and arrested by the Royal Canadian Mounted Police. Her real name, it turns out, is Roswitha Elizabeth Von Meerscheidt-Huellessem. The Canadian courts have first dibs on her. Next up after that are Missouri and Arkansas, where she’s wanted on multiple charges of fraud and assault, including attempted murder. Only after all that does South Carolina get to take a crack at her.
At the point that word went out about Elizabeth von Hullessem decamping with all the Banff conference money, it wasn’t known that von Hullessem and Mills were the same person. However, the intrepid crew at Writer Beware spotted the similarities in Mills’ and von Hullessem’s con-running styles. When they heard she’d been arrested, they got in touch with the RCMP, filled them in on Mills’ South Carolina activities, and put them in touch with the North Myrtle Beach detective in charge of the Mills case.
You can read the backthread of the developing story in the Melanie Mills thread on the Bewares Board, or get a nice summary of it on the utterly indispensable Writer Beware page. There’s a secondary tracking site at Preditors & Editors, too. It’s the most lurid scam agent case in years.

Reblogged from Making Light.
Note: For information about Brian Henry’s upcoming writing workshops and classes see here.
Posted by Brian Henry at 11:23 AM