I knew I was in trouble when Mom was waiting for us on the front porch with the wooden spoon behind her back. The look in her eyes said it all.

Mom had said she would take Diane, my best friend who was a year older, and me to the carnival that night.

“No, she won’t take us,” said Diane. “Your mom breaks promises all the time. So forget it, because they’re taking the rides down tomorrow and going to a new town.”

Diane knew a lot. She was a year older and in grade four. So it looked like now or never.

When Mom lay down for her afternoon nap, I decided it would be now. Dad’s pink glass hen in the china cupboard had plenty of change in it. Dad sailed ten months of the year but when he occasionally got home for a few hours, he’d deposit the contents of his pockets into the glass hen. No one would miss a handful or two, I thought. So when Mom lay down I dug in, careful to extract just the silver.

Diane and I filled our pockets and raced up the hill to the fair grounds. We heard the rides before we saw them. The merry-go-round organ music, the screams from the roller coaster and calls from the games spurred us on to our afternoon of sheer joy. 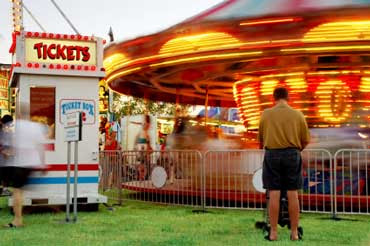 Diane put a pile of change on the ledge of the ticket booth. In return we got the longest string of tickets we’d ever seen – not like the short meany strings Mom bought when she took us to a carnival.

Off we went, first to the Ferris wheel where we rocked the basket until the man yelled for us to cut it out. No merry-go-round for us – that was for babies, and after all I was seven. Our fav was the Tilt-a-Whirl, which hurled us around and swung us backward till our necks hurt and we almost lost our grip.

Eat and ride, eat and ride and eat and ride. Diane picked the rides and I picked the eats. We gorged on candy floss, hot dogs and caramel corn. This was the best time in my whole life, and there were still tickets left and Mom was still asleep. This was heaven right here and now. 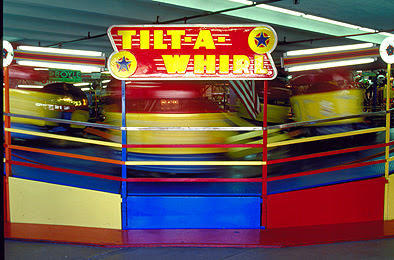 Five times we ran up the ramp of the Tilt-a-Whirl. Five times we gripped the dirty safety bar and shrieked our joy. But that fifth ride was our nemesis.

The tilting and the whirling got us screaming in no time but Diane started to make real strange gurgly sounds. Then whoosh – out it came all that floss and popcorn and hot dogs, all over the seat, and all over me and Diane.

We tilted and whirled and slid back and forth in a river of puke. Our little sear sucker dresses soaked it all up, and what our dresses did not absorb was smeared on the old leather seat. Diane howled, which made the ride man speed us up cause he thought were having so much fun and he saw we still had more tickets sticking out of our pockets.

The ride finally stopped. We staggered off, catching a glare from the man who realized what was on the seat when he smelled us. We tried to wash off the puke with a hose by the toss the ring game. Two kids walked by and we threw the remaining tickets at them. 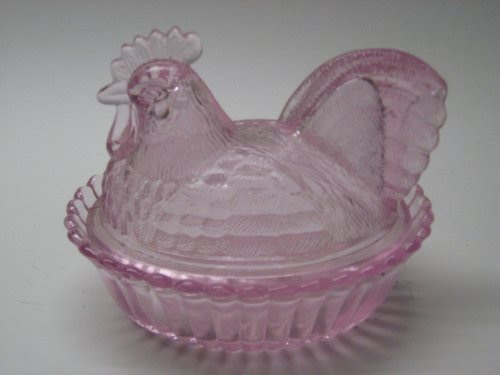 Our walk home was grim. The heat of the sun dried the puke into stiff stained patches and seemed to increase the stench. It was hard to breathe in the fumes. Why did Diane have to get sick and end it all? And we’d still had tickets left!

But it got even worse. There was Mom waiting on the porch wide awake with a wooden spoon behind her back. I knew one of her “good lickings” was coming. Why she said “good” I do not know, because they never ever felt good at all. She told Diane to go home that her mother was waiting.

Then the killer came when Mom said, “Wait till your Father gets home and you tell him what you did.”

There on the kitchen table was the pink glass hen with a dent in the mound of coins. How did she know? Seems I had left the china cabinet door open.

Today, decades later, I still have that hen in my china cabinet. But I never put change in it, lest temptation return. I remember Dad’s look. And I have never been on the Tilt-a-Whirl again since that summer day of the pink glass hen.

Suzanne Barteaux Burchell has been a secondary school drama teacher for 37 years and a part-time lecturer at Brock University in Dramatic Arts. She has written a play and had it done publically in Parrsboro, Nova Scotia. She is also an amateur story teller and has had four articles published in the Forum magazine for the Ontario Secondary Schools Teachers’ Federation.