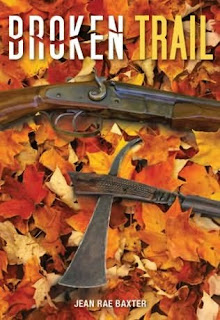 Dear Brian
I've been in Traverse City, Michigan, where my novel Broken Trail received the Moonbeam Awards' Gold Medal for young adult historical fiction. This was a great honour, since entries for Moonbeam Awards came from 33 U. S. states, six Canadian provinces, and three countries overseas. It was especially thrilling to me to have a book telling about the Revolutionary War from a Canadian point of view receive such acclaim.
Yours,
Jean Rae Baxter

P.S. I just learned today that Milcah Klein, owner of Marenga Publishing in Tel Aviv, wants to translate my first short story collection, A Twist of Malice, into Hebrew and bring it out in Israel. She wants to get started on the translation as soon as I give permission. I know you'll recall this book, as two of the stories in the collection were started as exercises in your workshops.

Note: Jean will be the guest speaker at my "You Can Write Great Characters" workshop, Saturday, February 4, in Dundas, Ontario. Details here.


Hi Brian,
I thought I would let you know I had saw the posting for the Leap Local Travel Story contest on your blog, and I won runner up. Have a great day!
Jackie D

Brian,
I’ve had a piece published on CommuterLit.com. Read it here. It was one of my short pieces for the Wednesday night class.
Matt

Hi, Brian.
I've started a new blog dedicated to raising awareness of the British Home Child movement. From 1870-1940 approximately 100,000 children were sent to Canada. Most boys became farm hands; girls, mothers' helpers. It's estimated that 10-12% of the Canadian population can trace their roots to a home child.

My grandmother sailed from England in 1912 at 8 years old with her brother and sister. To honor the 100th anniversary of her coming to Canada, I'm collecting stories of home children (with photos) and posting them. The stories will begin appearing on January 10.

If any of your readers/writers would like to participate, I'd be happy to post their stories. Writers interested in telling their ancestor's story can contact me at rosembrandon@yahoo.ca. An introductory posting appears on the blog here.
All the best,
Rose McCormick Brandon

Writer seeking quality contacts in Oakville area
I have recently moved to Oakville (Bronte). I am a retired International Creative Director (writer). During my 45-year career I have been transfered from Toronto to London, Paris, Brussels, Nigeria, Australia and New Zealand with International Advertising agencies.

Since retiring I have written and published 9 books. Eight were self published (IUniverse) ranging from fiction to biog adventures in the advertising industry. I have travelled the well worn paths trying to find an agent and a publisher with little success. Is there a quality club or group that can help me improve my craft and find the elusive publisher?

Labels: * News and what not, Markets for short pieces, Where your fellow writers are getting published