Struggling to her feet, the doe craned her neck over her shoulder, alerted by a minute sound, a leaf rustling in the warm, early winter breeze.  But she could not leave her fawn, its mottled back still wet from its birth.  She stood motionless over her newborn, defenceless but defiant, her ears pricked for any sound that did not belong in the forest.


Thirty feet up the sassafras tree, Mhykal held his breath, squinting down the sight of his ancient steel crossbow, past the vulture feathers of the flight and the stubby bolt resting in its groove.  He squeezed the trigger.  Before the doe could react the shaft pierced her ribs behind her shoulder and lodged in her lung.  She collapsed on top of her fawn, struggled to her feet once more with blood and mucus dribbling from her mouth and in silence lost her fight for life.
Mhykal climbed down the tree as the doe’s legs thrashed violently in the last throes of death.  Stopping a short distance from her, wary of being struck by a hoof, he waited while the movements died away until, after a final twitch, the deer lay still.  Moments later an older man approached, like Mhykal dressed in camouflage jacket and pants, his long hair and beard matted.
“Good shot,” the older man grunted.
“Thanks, Chon,” Mhykal replied.  The older man produced a length of vine and tied it around the deer’s hind legs, threw the loose end over a branch and heaved.  When the carcass was clear of the ground Mhykal drew a long knife from inside his jacket, slit her throat and stood back while the blood flowed over the carpet of leaves at his bare feet.  He drew the bolt from the deer’s side and slipped it back into his quiver.
“I dress it,” Chon said.  With Mhykal’s knife he slit open the belly and pulled out the warm guts.  The prized heart, liver and kidneys he put in a bloody pouch.  The fawn struggled unsteadily to its feet, tottering on spindly legs and gazed at his mother’s carcass.  Before the fawn could move, Mhykal grabbed it by the neck and slit its throat.  He wrapped his woven grass belt around its hind legs and hauled it over a branch to finish bleeding and to be field dressed.
With both carcasses slung from a pole Chon and Mhykal shouldered their burden and began the journey home.  Toward dusk they reached their cave on a ridge of higher ground on the edge of the hardwood forest, their acknowledged ancestral hunting ground and since the great killings many years before they had lived without contact with other humans.
At the last killing they had captured the younger of their two women, Wom.  She was Mhykal’s by common consent though, as was her duty, she serviced both men.  Of her eight children only Wom’s two older daughters were yet ready to breed.  Whether they were by Mhykal or Chon neither man knew or cared: the offspring were necessary to ensure that the cycle of life continued after he and Chon died.  Only those infants born without defects, they kept; the others they killed and ate according to ancient ritual so that their spirits would be released to live forever in the bodies of those who consumed them. 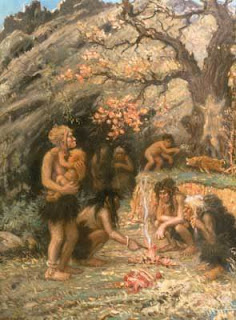 The women and children greeted the returning men with exuberance.  Tonight they would fill their bellies with the sacred flesh, roasted in the fire pit as their ancestors had done since the old days; and when the feast was finished they would breed until they fell asleep.  Mhykal and Chon removed and carefully folded their clothes, the revered, threadbare camouflage outfits, handed down through numberless generations and worn only for hunting deer, the birth of a child, a girl’s first menstruation, and final rites.  Otherwise, like their women, they went naked.


With the sharp green glass that had come with the big, blue box marked COLEMAN the men skinned, cleaned and butchered the deer.  The women washed the pieces in the spring that ran clear from the rains at that time of the year, unlike the muddy trickle it became when the temperature soared in the long summer months and they were forced to shelter in the cave from the great fires.
Chon’s woman, Rida, had built the fire and lit it with the magnifying glass that had been a family treasure for centuries.  The fire was a good luck omen; to ensure that the deer hunt would be successful, that they would have bellies full of venison when the men returned.  The two women had kept the fire alight through the days and nights that their men were away.  Now, as night descended, Wom added dry wood, waiting patiently until the red and orange embers shimmered with an even heat, ready to receive the sacred offering.
The cave had been their home for generations.  It was said that in ancient times an ancestor, perhaps even the same person who had painted SHIT HAPPENS on the wall, had hauled the box, a mattress and a sofa up to the cave.  What those markings on the wall or the box meant no-one knew.  According to legend the artefacts dated from the time when people the world over lived in great communities.  Neither man could imagine how these places might have looked, but Chon retold the stories around the fire with the vividness of an eye-witness.
The night of their return from the deer hunt they feasted until they could not move.  The women and children listened open-mouthed as Chon repeated the fables of the man who could walk on water and cure the dead and of the man who rode through the desert night sky on a magical horse.  He told of great places, too wondrous to imagine, with names like New York and Washington, drowned and swallowed by the great salt sea, places that once lay three months hard journey to the south and east, far beyond the freshwater sea, the desert plain and the mountains.
When the youngest of the children fell asleep the four older girls sat around the fire giggling as first Chon, exercising his right as the head of the family, and then Mhykal took Wom to the holy mattress.  The two oldest girls hovered nearby, watching as they had been commanded, receiving instruction in their life’s main purpose, their obligation to the continuance of their family.
Much later, bears came sniffing and snorting around the cave and woke Chon but he had hauled the meat up high, out of reach before falling asleep.  Chon rose and threw a log on the fire.  In the light of the flying sparks he made out the bulk of a brown bear as it skulked away.  Bears made good eating but they were dangerous to hunt, often needing more than one arrow for the kill.  When the last of the venison putrefied, be decided, they would leave it out as bait and shoot from a hide.
Before dawn a scream woke the sleepers.  The men looked about the gloom in alarm.

Chon turned to Mhykal. “Wom gone.”
Mhykal leapt to his feet and dashed from the cave to see Wom hobbling toward him, screaming hysterically.
“What up?” he demanded.
“Diamondback bit me.”  She pointed to two pinprick puncture marks on her buttock.  Mhykal understood at once: stepping on a snake in the dark when going for a squat they called the woman’s death, and before it came, as it almost surely would, she would suffer great pain.  If the venom did not kill her, the flesh around the wound would rot and she would die a slower and more agonizing death.
He and Chon debated their options while Wom writhed on the ground nearby, her breathing loud and laboured.  The men carefully examined the two adolescent girls kneeling by the fire.  If Wom died, which the men agreed was almost certain, and with Rida too old to breed, the two girls would have to be pressed into service sooner than anticipated.  Fully understanding their mother’s demise, the girls reacted to the men’s scrutiny with indifference, impassively acknowledging their own fate.
Chon lowered his voice. “Wom not good to eat with snakebite.”
Mhykal nodded.  The venom in Wom could kill the youngest children and make the rest of them sick.  He disappeared into the cave and returned with his long-bladed hunting knife.  Struggling to her feet like the deer before her, Wom’s scream gurgled and died in her throat as the blade sliced through the gristle.
They left Wom’s body outside the cave that night.  When the bear had finished devouring her, Mhykal killed it with a single arrow.  Donning camouflage, the men, Rida and the children ate the bear’s roasted flesh, and when they had finished Wom lived in them.
Later that night, on the holy mattress in the cave, the cycle of life was renewed.

As a child, Michael Joll suffered a haphazard education at the hands of governesses in Pakistan followed by boarding schools in England and Southampton University. Writing took a back seat to earning a living for forty years. In 2005 he started writing short fiction, four radio dramas (three broadcast), two yet-to-be published novels and a very small collection of poetry (2 poems so far). Michael lives in Brampton, Ontario with his wife of many, many years and three dogs. When not writing he tries to grow roses.
See Brian Henry's schedule here, including writing workshops and creative writing courses in Kingston, Peterborough, Toronto, Mississuaga, Brampton, Georgetown, Oakville, Burlington, St. Catharines, Hamilton, Dundas, Kitchener, Guelph, Woodstock, London, Orangeville, Newmarket, Barrie, Gravenhurst, Sudbury, Muskoka, Peel, Halton, the GTA, Ontario, and beyond.
Posted by Brian Henry at 7:14 AM