“My Mother, A Mouse and the Love of Reading” by Paul Daniel

I can’t remember a time when there wasn’t reading material in my home. Growing up, we had a subscription to The Toronto Star. My brother read the comics page of the newspaper; my mother, who was losing her eyesight, used a magnifying glass to read the front section; and my father, for whom English was a second language, made a game effort to read the sports page.

My experience with reading started with one solitary moment. I remember it as vividly. I must have been around five or six. My mother took me to the Mississauga Central Library at Dundas and Confederation Parkway. Don’t look for it now.  The old Central Library was torn down more than 20 years ago. But when my mother took me there, the library was brand spanking new.

She took me to the children’s section on the main floor and made what appeared to be a random selection of books. Only one stood out: Anatole by Eve Titus. Published in 1956, the story is about a mouse named Anatole who lives in France. Trying to get cheese for his family, he discovers that humans hate mice.  How can this be? he wonders. He is a proud French mouse, determined to find a way to earn his keep and to do so with honour.

Anatole eventually becomes the official cheese taster at the Duval cheese factory, grading the quality of its products. All the while, people are wondering who this “Anatole” is. I’ll leave it at that. I don’t want to spoil the story for you. It’s really good. 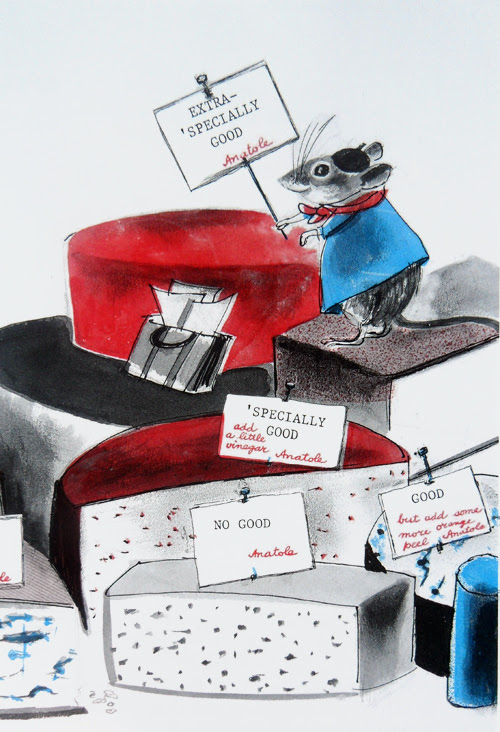 The words were clear and concise. The pictures, while not bursting with colour, were vivid. Perhaps it was the minimal use of colour that made such an impact on me and has stayed with me ever since.My mother never took a course in child psychology but she would have made a fine teacher. I think one reason she picked that book for me had to do with cheese. Like a lot of kids that age, I gobbled up cheese as if it were candy. She must have figured that a book that contained cheese would obviously have some attraction for me. Then again, maybe she was just lucky.

Years later, I found an online used bookstore that was selling a discarded original edition of Anatole. I paid probably more than ten times its original price. It was worth every penny.

I have never stopped reading. I have always said reading is one of the few things in life at which I excel. If I’m in a line up, I’ll be reading a book. If I’m at a coffee shop, I’m reading a book or a magazine. On my daily commute to work and back (which works out to four hours), my nose is scraping away at a book.

For many people, social media is entertaining. But I equate social media with eating too many loaves of white bread. It’ll fill you up but too much of it is bad for you.

In an age when thoughts are reduced to 140 characters and simplistic emoticons, I think of the great gift that my mother, indeed my entire family, gave me without realizing it. Enjoying the written word never goes out of style and it never gets boring. It only gets better.

Paul Daniel is an audio producer at Accessible Media Inc., (AMI) in Toronto, Ontario. Writing and reading have always been his second and third passions following his first passion, his wife, Mary. He’s enjoyed being in Brian’s creative writing class. “Brian’s class has reminded me the pleasures and challenges of writing,” says Paul. “There’s never a dull moment.”