“This Time it Will Be Different” by Barbara Helen-Hill

The single 40-watt bulb did little to alleviate the dark shadows that danced in the corners of the room Gary rented. Quietly he laced up his boots. He made himself a cup of “mud” from the lukewarm water in the tap and the jar of instant coffee, took one swallow and spit it in the garbage can. Sure could use a pick-me-up.
Aromas of pungent garlic mixed with the stench of stale urine from the lavatory a few doors down filled his nostrils when he opened the door. He did his best to hold down his stomach as he made his way down the stairs.
Outside, the sultry heat of the day had started before the dawn had awakened from its moonlit sojourn. His shirt clung to his broad shoulders and sweat trickled down his back as he crept into the street. Still feeling the effects of the alcohol from the night before, his legs quivered and his muscles tightened with each shaky step. He made his way past the garbage-littered yards to begin another long, sweat-filled day of beams, chains, rivets, and noise – noise that would not fill the spaces occupied by her parting words echoing day after day, night after sleepless night.
His strong muscle-filled back stretched the seams of his faded green shirt, his blue jeans fit snugly to his hips and thighs. Gary was aware that he made the waitress at the Blue Nugget whistle every night when he came in the door. His legs, sinewy from daily climbs up and down the girders, today seemed to drag with every laboured step in his steel-toed boots. His nausea and pounding head made him wish he had left the Nugget a little earlier.

A sudden gust of wind, like a miniature tornado, swept up the litter of paper, popsicle sticks and never ending dust, then ended as quickly as it had started, taking with it, his hopes for a rain-out.
Boy I'm dryer 'n a popcorn fart. Ssure wish I had a drink right now. If I had the energy I'd...  Oh hell, I can wait till I get to the job. The boss usually has a few cold ones around.
Gary made his way to the bus stop, barely noticing the broken bottles that cluttered his path. He took each step as slowly and deliberately as a robot. He had five minutes to wait for the chauffeur driven limo of thirty passengers to cart him to the job – the job he had searched so hard for and now wished was over.
“Are you an oil rigger?” a woman said from behind him. “My dad was an oil rigger, that black gold, he called it, coming out like, like,” she stuttered, “like, water from a tap an, an, an, he put men to work an, an – ” Suddenly the woman stopped, just like the whirlwind a few minutes before.
Gary turned to see who had spoken to him.
She stared back for a millisecond and then started rambling again. “My dad was an oil rigger….” the words tumbleing from her lips with no cognitive effort, expelling thoughts to make room inside her head. Her vacant eyes, like the room he had left minutes before told him nothing and yet volumes. He saw emptiness, and yet, it was as though he could see her thoughts bouncing around inside her head like a pin ball in an arcade. Her once blonde hair, now caked with the dirt and grime of the city, hung in strings around the thin, bony shoulders as she leaned over the shopping cart filled with all her belongings.
She had draped sweaters and wraps around her body. Her skirts layered over pants covered her frail frame. At first glance, she appeared as though she weighed over two hundred pounds, but Gary saw underneath those layers of clothes that a strong wind could have blown over her frail body.
Her shopping cart, filled with boxes and newspapers, held everything she owned and kept her weak, spindly legs from toppling over. Her blue eyes darted suspiciously from pillar to post as if she were on the run from some evil tormentor.

“I'm a high steel construction worker,” he said and then realized he was talking to himself. Her mind had wandered off as she stood rooted to the same spot, forgetting she had asked a question minutes before. She pushed the cart a few inches and stopped when the bus came.
Her mumbling continued as he moved to climb aboard the bus. Gary sat down by the window and looked for her. Her words repeated themselves in his mind. Gary looked around and noticed that the other passengers had paid no notice. He heard the words, “my dad was an oil rigger,” once more and looked around again, feeling heat rise up from his neck and his face flush. She was nowhere to be seen.
As the bus pulled away, taking him on his chariot ride down near the river to the new high rise condominium he was helping to erect, Gary settled back into the seat, letting his mind wander. He thought of home. Another day, another dollar. Another night at the Nugget. This time, he thought, it will be different. 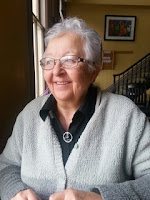 Barbara-Helen Hill is a multi-media artist and author of the book Shaking the Rattle Healing the Trauma of Colonization. She is published in Gatherings VI, VII, VIII and IX and X, anthologies that include writings by Native North American and Indigenous people from around the world published by Theytus Books, Penticton, BC.  She is published in anthologies, most recently in Genocide of the Mind, an Anthology by Urban American Indians: One Spirit Living in Two Worlds by Nations Books. Her poem Coyote is part of Onkwawennahson’a “Our Voices” spoken word CD, produced by Six Nations Writers in partnership with Chiefswood National Historic Site and Woodland Cultural Centre.
“This Time it Will Be Different” was originally published as “High Steel” in Talking Stick.