I knew I was in trouble when the lights came on. It’s not as though I hadn’t seen the cruiser in my rear-view mirror. I was just hoping he hadn’t seen me. Fat chance. Driving my brother’s apple green Mustang with muffler set to stun, I kinda stood out. Running that red light?  That hadn’t helped, I suspect. What was the line from that movie?  “Red means stop; green means go; yellow means go faster.” Too bad I was such a poor judge of distance. Otherwise I might have made it through the lights. Without the police escort. Oh well.
I pulled over – like I had a choice – turned off the engine and rolled down the window. I would have enjoyed the silence except for the fact that now I could hear the static of the police radio and then the crunch of gravel as the cop approached my car. Not my favourite soundtrack.
Then there he was. All six-foot, twelve-inch of him. Was it written down somewhere that all traffic cops had to be wannabe NBA stars?  Would someone of normal human height not have the requisite looming ability?
“Good afternoon, officer.”  Did I get any brownie points for being pleasant, I wondered.
“You blew through that red light pretty quick, didn’t you!”
Okay, no preliminaries. Let’s get right to the heart of the matter.
“Uh, yes sir.” (Indicate awareness and contrition)
“Make a habit of that, do you?” “Oh, no sir!” (Emphatic implication of previous innocence)
“License and registration, please.”
I began rummaging in my purse. Purely for show. I had no idea where the registration was. And – you’ll laugh at this – silly me, I didn’t have a license. Sure, I was stalling. Sure, I knew that I was only delaying the inevitable, but who walks voluntarily to the gallows?
“I seem to have misplaced my license, officer.”
He stared down at me from somewhere among the clouds. Pity me, oh, giant arm of the law. Forgive my trespasses!
“Step out of the car, please.”
No!  Don’t want to. You can’t make me. That was what I wanted to say.
“Yes, sir.”  That’s what I actually said.
I stepped out of the car, not especially gracefully, not with any great speed. Why not try to delay the inevitable?
Then there was the walk of shame to the back seat of the cruiser. Of course, my boss drove by and stared at me. Of course, he slowed to make sure it was me.
“Gee, there’s not a lot of leg room back here.”
Steely-eyed blue stare for ten seconds. “They aren’t designed for comfort.”
I got off with a ticket for the red light thing, a fine for the registration thing and a date for the license thing. That’s a “promise to appear” date, not the fun kind.
And my brother was pissed because while his apple green baby was parked on the side of the road, somebody splashed mud on it. Geez, my life should be so hard. 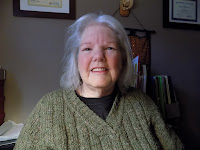 Helen E. Patterson is a life-long theatre addict with no interest in rehab. She has had plays of varying lengths produced in The Grand Theatre’s Playwrights Cabaret, the London One Act Festival, and the London Fringe Festival, as well as some independent productions.  She currently spends her days (well, part of them) slaving over a hot keyboard, completing the final(?) rewrite of her first novel, with the encouragement of her writing group, The 13th Hour.