“Victim of the Night” by Colleen Mitchell Robinson 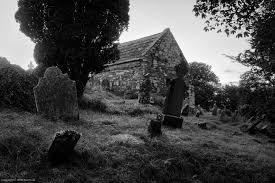 As she raked up the leaves around the tombstone, Krista turned her face toward the wind and felt a chill. She looked at the graveyard sprawling around the old church.  It would have been beautiful, if it wasn’t for the fact she had to live there.

This was Greg’s brilliant idea.  Live in the manse for free in exchange for maintenance of the church grounds and cemetery.  Great, except that most of the chores fell to Krista.  Greg worked night shift in town, and insisted he had to sleep all day to survive.  She worked in town as well, at the lawyer’s office, and spent her weekends cooking, cutting grass, and weeding gardens.  At night, she was alone.

This Saturday was typical.  Greg had picked up an extra shift, so Krista put a stew in the crockpot and headed out to look after the grounds.  He had promised to shovel the leaves and grass into the compost when he got up, so she wanted to be sure everything was ready for him before he went to work.

As the sun started to drop behind the trees, Krista put the rake in the shed and closed the door tightly.  She glanced at the shovel leaning against the wall, and then back up at the bedroom window.  No sign of movement from Greg.

I’d rather be living in the shed than that old house, she thought.  It’s in better shape.

No matter what the weather, the sliding window panes rattled and the electricity was always going off because they were so far out of town.  The bedrooms on the second floor were drafty, and the one they slept in had an access to the attic.  She could hear bats up there at night, keeping her awake for hours.

She had suggested moving into a cheap apartment in town, but Greg wouldn’t hear of it.  No sense in spending money on rent when we can get this place for free.

Krista came into the kitchen just as Greg was coming down the stairs.  He reminded her of a vampire, hiding from the sun, rising as night approached.

“Hey babe, that smells great.  Do we have any bread?” Greg asked as he lifted the lid on the crockpot.

“It’s on the table,” she replied.  “Are you going to shovel those leaves into the compost before you go?  I told the priest they’d be cleaned up before the service tomorrow.”

“Nope.  Gotta eat and run.  The guys have a football pool at seven, before shift starts.  You should have time to finish before dark.”

Krista glared at him.  She suspected there was more than a football pool involved.  She couldn’t wait till he wolfed down his food and left.  At least then she could enjoy a glass of wine in peace. 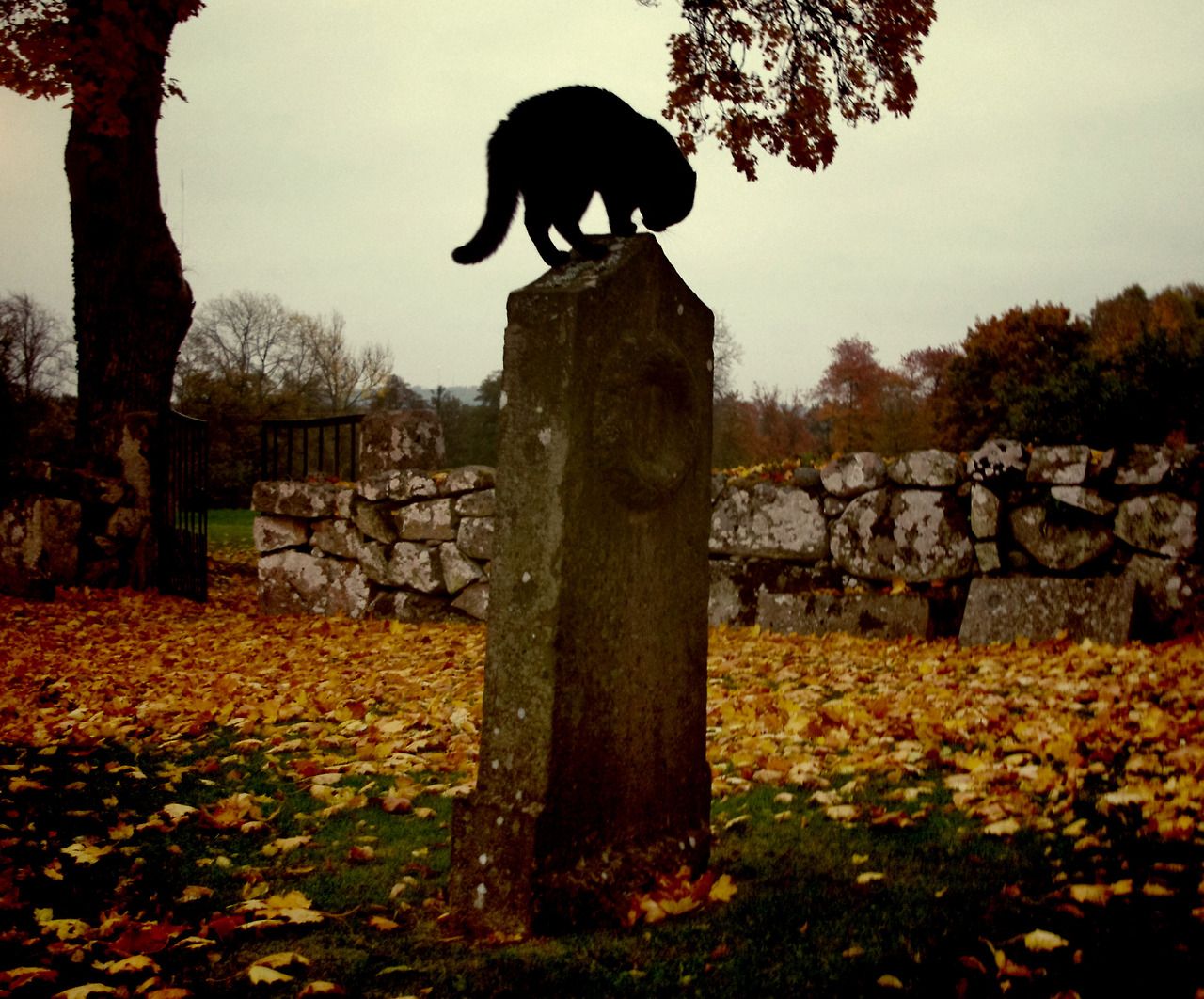 With the dishes done, Krista looked out at the churchyard.  She knew the leaves should be shoveled into the compost and covered with dirt, but the wind was picking up and it was starting to drizzle rain.

No, dammit, she was going to leave everything as it was.  When the priest called to complain, Krista would wake Greg up and let him deal with it.

She poured herself another glass of wine and flicked on the television.  Nothing.  Cable was out again.  She slammed off the set in disgust.

She stood up and went over to the window, and then jumped back, startled by a bang.

A bat had flown into the glass, and wriggled into the gap between the sliding panes.  It was now sandwiched there, trying frantically to get free.  Krista looked at its small pressed face, jagged teeth exposed, grimacing at her from its prison.

This was all she needed! She had to get that thing loose or it would torture her all night.  She went out into the growing dim and tried to ease the panes apart. The trapped creature made a screeching sound and clawed its way in the other direction, limping into the living room.  Krista charged back in, and saw it flopping on the floor.

Without thinking, she grabbed the frypan from the counter and smashed it down. The bat looked dead.  Stunned at least.  Probably dead – she’d hit it hard. She scooped it into the pan and lunged out the back door, flipping the carcass into the garden.

As she looked for signs of life amidst the greenery, she heard a shuffling noise behind her.  Krista turned toward the church, and saw a man slowly making his way up toward the manse.

“I’ve come to ring the bell,” he said as he stepped up onto the deck.  “The priest lets me ring it every year, on the anniversary of my brother’s death.”

Krista froze.  The man had a dirty growth of beard, and his clothes were filthy.  She started walking slowly toward the kitchen door.

“You’ll have to come back tomorrow,” she said.  “The priest isn’t here, and I don’t know anything about the bell.”

“He says I can stay here overnight, by the church, so I can ring the bell in the morning before service,” replied the man.

“Well you can’t.  You’ll have to come back in the morning.  I’ve gotta go.  I’ve got food in the oven, and my husband will be back soon,” she lied.

She went inside, bolted the door, and then ran up the stairs to her bedroom so she could watch the man down in the yard.  It was almost dark.  She could barely see him.  He was shuffling back across the drive toward the church, and then disappeared into the cemetery.

She picked up her cell phone and called Greg.  No answer.  The clock on the bedside table said 8:30. His shift didn’t start until 11:00.  She tried him again and finally reached him just before 9:00. 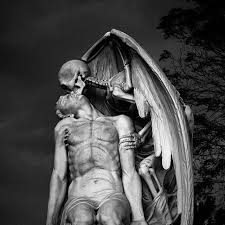 “There’s a man outside.  He said he’s here to ring the bell for his dead brother or something.  I told him to go away, but I can still hear him over by the church.”

“What do you want me to do about it?  I told you I’m busy with the guys and my shift starts in a couple of hours.  If I come out there now, I’ll be late for work.”

Krista sat on the edge of the bed, trembling.  She wasn’t sure if it was from fear or anger. Both, she decided and drank two more glasses of wine.

When she jerked awake, she found herself lying fully clothed on top of the comforter.  The bedside clock read 3:50 am.

Then she heard it.  At first, she thought she was dreaming, so she stood up and peered out between the bedroom curtains.  The moon was scuttling in and out of jagged black clouds, making it difficult to see the ground below.  Then she heard it again.  The sound of the bell ringing in the silence of the night.

Krista turned on her phone and dialed 911.

“Yes, I need someone to come out and help me.  There’s a guy on my property.  He tried to get into my house earlier tonight.  I told him to go away, but I’m sure he’s still here.  I’m on the 5th line in the manse beside the church.”

“Okay ma’am.  It doesn’t sound like you’re in danger, but we’ll send a car out there as soon as one becomes available.  It may be a while, so just keep your doors locked, and you’ll be fine.”

Krista pressed end, and clutched her phone as she crept down the stairs to the kitchen.  If she kept the lights off, she might be able to see what was going on without him seeing her.

Or she could go outside and confront the man who was making her angry and afraid.  She stepped outside onto the porch.  There was the shovel resting against the wall beside the door.  She grasped it, held it firmly in her hands, and advanced toward the church.

Krista sat in the back of the cruiser, covered in a thermal blanket and blinking slowly.

“Looks like your husband must have tried to confront that drifter and got into a fight.  I’m really sorry,” said the officer.  “Did you hear anything more after you called us?”

“No, nothing,” Krista replied.  She was shivering with shock and cold.

“Did you normally keep a shovel outside?” the officer asked.

“We normally keep everything locked in the shed, but my husband was supposed to be composting the leaves, so I left it out for him.”

“Well, we’ll have to take it with us, you know, as part of the investigation.  Don’t worry ma’am.  We’ll catch this guy.  He can’t have gone far on foot.”

Krista looked at the leaves swirling around the tombstones, and the yellow police ribbon that was strung around the trees, guarding her husband’s body.

Now that the sun was coming up, everything looked a little clearer. 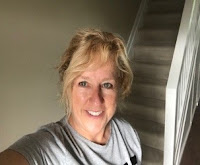 Colleen Mitchell Robinson is exploring creativity in her new hometown of Collingwood, along with kayaking, vegetarian cooking, and an occasional glass of wine by the bay.