“Flying with American” by Sharon Saberton 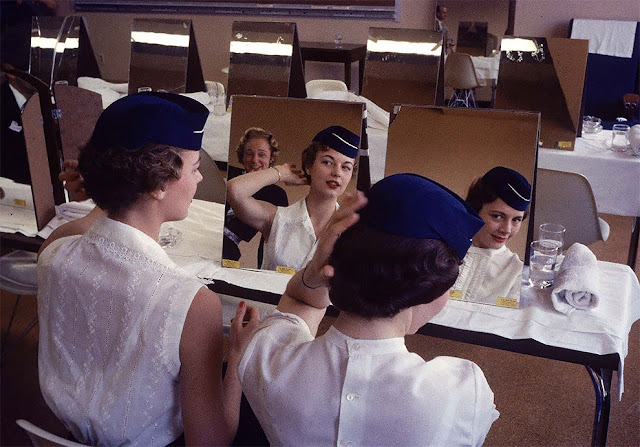 I was 22 years old and in a terrible relationship. I wanted to escape. I decided that distance would be the perfect way to break free. I wanted to spread my wings thus I applied to American Airlines as a stewardess. I chose American Airlines because I do not speak French, a prerequisite for flying with Canadian Airlines. The role of a stewardess was considered to be both glamourous and exotic. This compelling job description appealed to my sense of adventure.

This was 1962 and it did not occur to me that the name stewardess was chauvinistic as it was a female derivative of the male term steward. I was attracted to the notion of travel and wearing a great uniform.

To get ready for the interview, I lost 10 pounds and weighed in at 118 pounds. I took my interview in Toronto and I wore a light yellow princess-line silk dress, flesh tone nylons and black high heeled shoes. I topped it off with a black wide brimmed sun hat. The interview was comprehensive and the interviewer (male) was delightful. I enjoyed the experience tremendously. 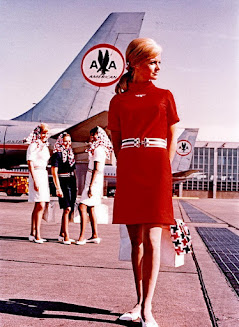 To be a stewardess in 1962 was a sought-after position. For this position with American of the 1,600 applicants only 40 of us were accepted into the program. I was both proud and relieved to be one of the carefully chosen.

At that time American Airlines selected one or two young women from Canada and we were given a green card on being hired. I had no idea of the value of a green card I just accepted it as my due.

My father and stepmother saw me off at the Toronto International Airport and I was on my way to Dallas Texas. I was filled with self-importance and confidence but my father was filled with angst. He was concerned for my safety.

I was met at the Dallas airport by a college representative and my stewardess training was underway. At the College I met my classmates who like me were fresh faced young women keen to wear the uniform and travel the world. We were both honored and excited because we were to be the first class of stewardesses to crew the Boeing 727.

The college was set about 60 miles from Dallas. My recollection is that it was pretty much in the middle of nowhere. However, the grounds were lovely with paths that meandered through well-kept gardens.

The college was modern and decorated tastefully with lots of light wood and bright colours. The rooms were comfortable and there was a lovely lounge to read or listen to music. It was here in this lounge that I heard the Beatles for the first time. It was a memorable occasion as we all sensed a shift in the culture of popular music.

The class rooms were well appointed and the cafeteria served exceptionally well prepared and delicious food. The actual training was a bit of a shock. We were not required to develop any technical skills, geography knowledge, or meaningful safety procedures. What airlines were looking for was simple, young women who were attractive, slim and single.

The training focused on becoming a charming hostess with an emphasis on appearance and presentation. We were weighed in every morning and our weight was documented. I was required to lose 4 pounds. I was starving at all times and dieting became my way of life. The well prepared food in the cafeteria was clearly off limits for me.

We were observed and critiqued at all times for good posture, a pleasant smile and the requirement to project a friendly charming affect. Those who did not adhere to these requirements quietly disappeared.

We were kept very busy taking important classes such as maintaining a good hair style, performing manicures and pedicures and removing unwanted hair.  We were required to wear bright red lipstick with matching nail polish. Matching was critical.

The instructor’s gentle approach in changing our personal affect was carefully orchestrated. Since I did not have a mother or an older sister this was the first time that I was being directly guided in grooming and personal appearance. I felt quite comfortable with this transformational cloning process.

The uniform was both fashionable and functional but there could be no jiggle so we were all fitted for girdles. In the early 1960s girdles were still popular with women and so I was not unduly upset that I was required to wear a constrictive garment.  High heels were required except for when we provided the inflight food service.

However, I had one frustration that became a spark of discontent. Because we were the face of American Airlines, we were required to buy into and adopt American Airlines corporate culture. I felt like I was being initiated into a cult. 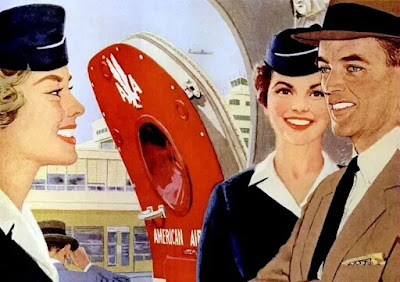 When I was required to show slavish allegiance to American Airlines I seethed with anger and my body tensed. But I quickly learned to present a passive, teeth clenched smiling relaxed presence. Despite being hungry, mad or sad, it was critical to maintain the requisite stewardess affect at all times.

An example of this cultish behavior occurred when we were expected to joyously break out in enthusiastic song while standing in line in the cafeteria while waiting for breakfast. The songs were incredibly annoying.

One song that I vaguely remember was sung to the tune of Give my regards to Broadway. It went something like this:

“Give our regards to Delta, remember us to Eastern too.

Tell all the gang at TWA that they can be put to rest.

Because, we at American are the very best.”

This was finished with loud cheers of hip hooray. This was especially offensive to me because not only did I find the song mindless, but because I had to lose that last four pounds and I was hungry. 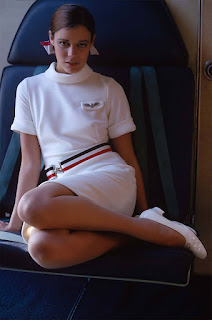 It quickly became clear to me that I was alone in finding this part of the training both distasteful and disenfranchising.

There were a number of life skills that I learned and applied to my life as a result of stewardess training.  Perhaps the most valuable skill that I have applied in my career path is that I have been able to coach and develop good customer service skills in others.

Finally, we were ready to be fitted for our stewardess uniform. This was an exciting part of the training. In the early 1960’s oil production was at its peak in and around Dallas and as a result there were a lot of ranchers who were now very well off with money to spend. The store Niemen Marcus in Dallas catered to this new money and it was here where we were taken for our fittings.

We were advised that the cost of our uniform would be taken out of our future paychecks.  This did not bother me in the least but little did I know the high cost of this gorgeous uniform.

The straw that broke the proverbial camel’s back in my relationship with American Airlines was when I finally understood that the pay for stewardesses was appallingly low. Most stewardesses had to have another job in order to live.

Further, it was a career limiting profession. The career expectation was that a stewardess would only work a maximum of 18 months. Marriage was cause for immediate termination. This made promotion very difficult and only a very few would be able to achieve secure positions. I was ambitious and I could see that this was not a profession where I would be able to advance my career.

And so I resigned from American Airlines just before graduation. I have no regrets but I have wondered on occasion, how my life may have gone had the job offered a positive career path. 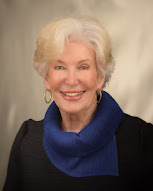 Sharon Saberton is a retiree whose interests and strengths lay in education, communication and facilitation. She now devotes her time to family, friends and caregiving.  One day she hopes to be a grownup. In the meantime, as she finds joy in writing.