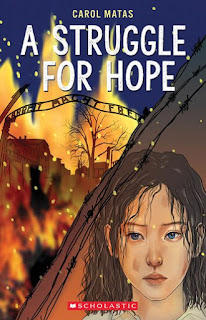 Just in time for Hanukkah – the best new Jewish books from Canadian publishers for children, pre-teens and teens.

A Struggle for Hope by Carol Matas (Scholastic Canada, for ages 9–12, available here).

Seventeen-year-old Ruth Mendenberg fights because she must. The year is 1948, Israel has declared its independence and the armies of five surrounding Arab nations have invaded, seeking to kill the new state at its birth. So Ruth fights to defend her new country, her kibbutz, and the children she helped smuggle from Poland to Eretz Yisrael {Hebrew for Land of Israel, as it was known to Jews before the state was declared}.

Ruth has her internal struggles, too. She survived Auschwitz, where she helped the sonderkommando blow up the crematoriums. But she also lost her entire family, except her brother who by a miracle also survived and reunited with her in Israel.

This is a novel that moved me to tears – not so much from the horror the story evokes but from how Matas shows her characters finding hope, friendship, and love in the face of overwhelming loss.

A Struggle for Hope should be in every Canadian grade school. It’s wonderfully written, and as a recent novel for young people that shows Israel’s struggle to survive in a positive light, it’s a rarity. 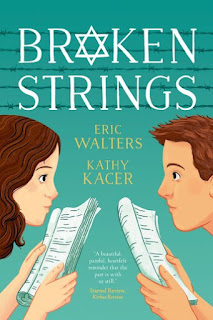 Kacer is the author of two dozen books about the Holocaust for young people while Walters is one of Canada’s best known children’s authors, with more than 100 juvenile novels out. Together, they have pulled off a novel that’s both deep and a page-turner.

Shirli Berman just wants a prized role in the school play, but rooting around in her zayde’s attic, she finds an old violin and a playbill with a photo of her zayde as a boy in a family klezmer band. What? She’s never seen a photo of any of these people before, and her zayde doesn’t play violin – he doesn’t even like music.

Amid the ups-and-downs of Shirli’s school putting on Fiddler on the Roof and Shirli crushing on the boy playing the lead, her zayde’s story emerges. He last played violin as part of the orchestra at Auschwitz, playing for the condemned as they went to the gas chambers. It’s a moving novel – one that young readers won’t be able to put down. 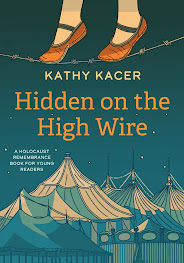 Kathy Kacer has another Holocaust-themed book out in 2022: Hidden on the High Wire (Second Story Press, ages 9–12, available here).

Irene Lorch has grown up in the family circus, performing on the high wire. But when the Nazis close them down because it’s a Jewish circus, Irene and her mother hide from the Gestapo with the Althoff circus. This is a novel based on a true story. Yad Vashem has recognized the Althoffs as Righteous among the Nations, and the novel includes photos of them and the real Irene at the back. 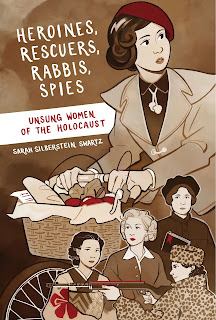 These are stories of nine remarkable women from Faye Schulman, a resistance fighter who photographed both Nazi atrocities and the Polish resistance, to Vera Rosenberg Atkins, who ran British spies in occupied France, to Regina Silberstien and Ruth Altman, the author’s mother and aunt who together survived the Holocaust and, after the war, committed themselves to the Jewish future.

Be sure to also check out “The best new Jewish books for young people from Canadian publishers ~ Part Two,” which includes books that are not Holocaust-themed, here.

Note: These round-ups of Jewish books for kids also appeared on TheJ.ca, the online journal of news and opinion for Canada’s Jewish community.

Brian Henry is a writer, editor, creative writing instructor, and publisher of the Quick Brown Fox blog. He reviewed books for Books in Canada and The Toronto Star and has written opinion pieces for the National Post and the Toronto Star. He was also a regular contributor to the (now defunct) Jewish Tribune and the Engage and Harry’s Place websites in the UK. He writes for TheJ.ca as often as he can find the time.